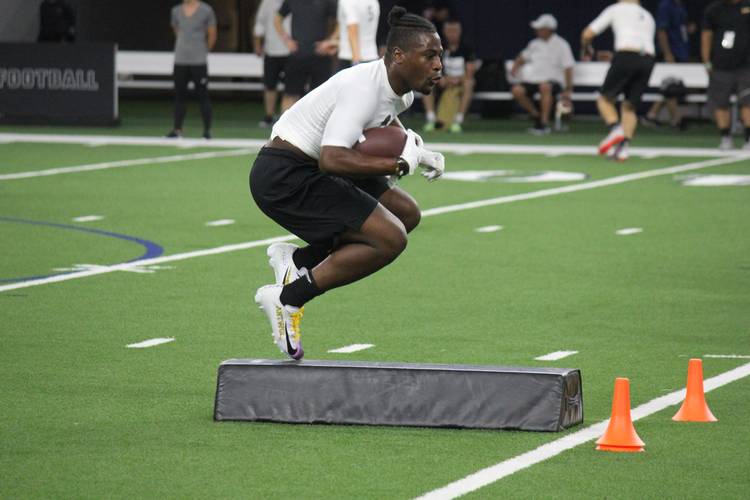 The IMG Academy (Fla.) running back getting most of the headlines in Texas recruiting is Noah Cain. Expect more to be said in coming months about Trey Sanders, the No. 1-rated running back in the 2019 class and a teammate of Cain. Both hold an offer from the Longhorns and Sanders recently made his way to Austin to see what the hype was about.

“(Tom) Herman is a cool, laid-back guy. He wants to win championships. Texas had a great class in 2018 and is on their way up,” Sanders said. “There is great tradition at Texas. It was a nice, beautiful place. It was a great city.”

Sanders is a five-star who impressed all weekend at The Opening Final in Frisco. The 6-foot, 216-pound recruit is preparing to release a top five. He said Texas is in good position to be one of those schools and receive an official visit in the fall. Sanders wants to pick a school during the season or on national signing day. Assistant coach Stan Drayton is a big reason why.

“Coach Drayton critiques my game. He’s a big film guy. He brought me in there for 10 minutes and watched my tape with me,” he said. “Not many coaches will give it to you real like that. I’ve taken that stuff and started working on it.”

Is there a chance Sanders and Cain could continue to split carries at the college level? Cain said earlier in the week that it is a possibility and Texas would be one of the schools able to provide that opportunity.

Wright, a four-star wide receiver from West Mesquite, wasn’t one of the 25 Texans invited to The Opening Final. He missed offseason camps because of a toe injury and wasn’t cleared for a return until June. He made the short drive to The Star in Frisco to watch some of the event and provide a recruiting update after a summer of unofficial visits.

“7-on-7 is just reps. It’s not football. To be a receiver, you have to be an actor. It’s important to disguise reps and these camps and 7-on-7 help with that part, but it doesn’t count towards anything,” he said. “It’s just practice.”

The 6-foot-3, 213-pound prospect says he’ll release a top five soon and plans to announce his decision at the Under Armour All-American Game in Orlando. That means he’ll likely sign with a school in February and pass on the early signing period. Or, Wright can sign his national letter of intent in December and keep the decision quiet until early January.

“(Drew) Mehringer is my boy. I missed the pool party because I was at a 7-on-7 tournament, but I’m going to make my way back down there at some point,” Wright said. “I’m chilling now. I’m just trying to improve my game and get faster. I’m up to 215 and trying to get to 220 before the season.”

Wright didn’t begin playing wide receiver until his junior season. He’s prepared to show his improvement as a technician during his senior campaign.

“This time last year I was scared when a defender got in my face. I barely knew how to run routes and was only relying on my athleticism,” Wright admitted. “I still have a way to go, but I’ve improved my technique and understand what to do a lot more. That lets you play faster on the field.”