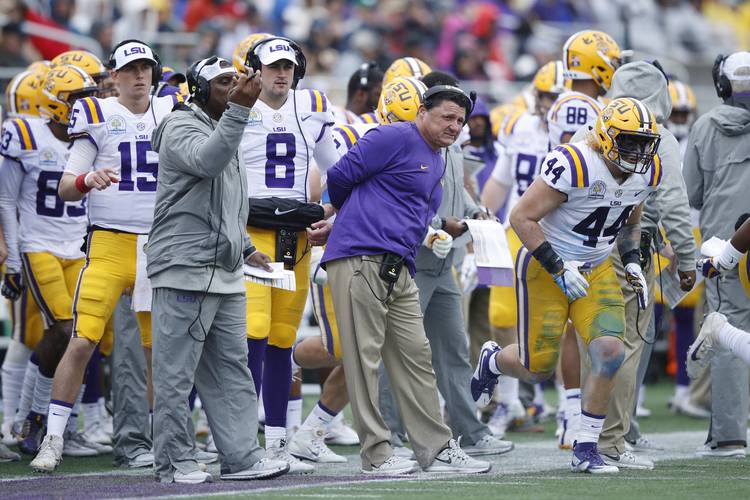 Head coach Ed Orgeron of the LSU Tigers looks on against the Notre Dame Fighting Irish in the first half of the Citrus Bowl on January 1, 2018 in Orlando, Florida. Orgeron is 15-6 in his first two years at LSU. (Photo by Joe Robbins/Getty Images)

The Tigers’ best-case scenario: Ohio State graduate transfer Joe Burrow beats out three inexperienced quarterbacks, wins over the locker room and ignites a Tigers attack that’s been tame for too long. The Bayou Bengals have swung and missed at QB for most of the last decade.

Their worst-case scenario: A meat-grinder schedule, which Bleacher Report rates the fourth toughest in the country, chews up the Tigers. They face national title-game finalists Alabama and Georgia, have road trips to Auburn and Florida and a neutral-site opener against Miami.

RELATED COVERAGE: Ed Orgeron is ‘fired up’ for what could be a daunting season

RELATED COVERAGE: Miami is as in the dark about LSU’s offense as, well, LSU

Spring cleaning: Justin McMillan, Lowell Narcisse and Myles Brennan each had a lot of stars next to their names when recruited, but none of the three QBs made the offense hum. Perhaps Burrow, a competent passer who sensed he was being phased out by younger talent at Ohio State, can come in and save the day.

A WR factory: Despite mediocre QBs, the Tigers always produce premier NFL wide receivers. The latest catch, Jonathan Giles, actually is a transfer from Texas Tech. Giles was fourth in the Big 12 in receiving yards (1,158) and catches (69) and fifth in TDs (13). Justin Jefferson is poised for a breakout after a big spring game that included a 94-yard TD. Watch out for freshman Terrace Marshall, a five-star recruit who chose LSU over Florida State, Texas and Texas A&M on the last day of the early-signing period.

The Tech Factor: Strangely, it’s another ex-Red Raider who could make a big difference on defense. Like Giles, DE Breiden Fehoko, one of Tech’s highest-rated recruits ever, left Lubbock for the Bayou, and he looks formidable. ILB Devin White led the SEC in tackles and Greedy Williams is next in a long line of LSU shutdown corners. OLB K’Lavon Chaisson, a sophomore edge rusher from Galena Park North Shore who spurned Texas on signing day in 2017, shows signs of blossoming.

From Fournette to Guice to …: For the first time in nearly a decade, LSU enters the season without a proven tailback. Clyde Edwards-Helaire, who had a leg up after the spring, gained 31 yards in eight carries last year. Nick Brossette had 96. Freshman Chris Curry could find his way into what looks like RB by committee.

Note: LSU-Miami is at AT&T Stadium in Arlington

The key game: Sept. 15, at Auburn. Forget Alabama — the Tigers can’t beat the Tide. But if they can take down the other Alabama powerhouse, it could kickstart a surprise season. If not, a 6-6 campaign predicted by ESPN’s Power Index could become a reality. LSU hasn’t won fewer than eight games since 1999.

This was the last team that Mack Brown faced as Texas’ coach.