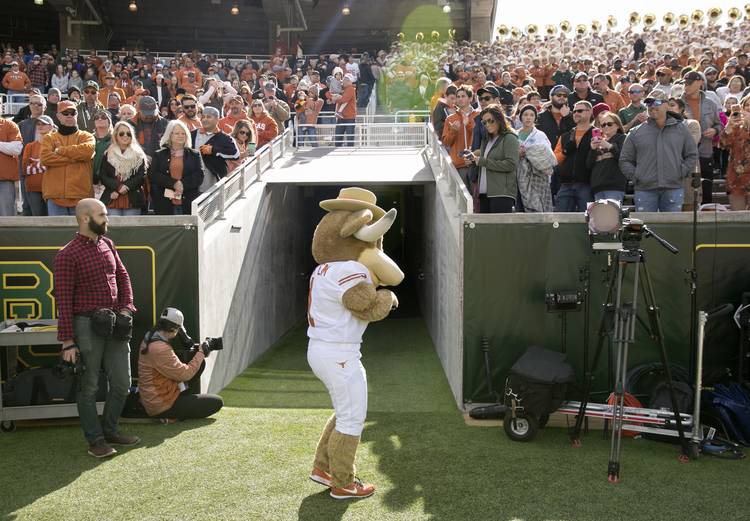 The UT Longhorns mascot fires up the crown for the first half against the Baylor Bears at McLane Stadium in Waco on Saturday October 28, 2017. JAY JANNER / AMERICAN-STATESMAN

Texas didn’t need to wait until the Fourth of July to watch fireworks. The Longhorns started the month with a commitment from four-star safety Chris Adimora, a product of Mayfair, Calif. He’s the second Californian to pledge to Tom Herman’s class in 2019, joining four-star outside linebacker De’Gabriel Floyd. Texas also signed quarterback Cam Rising from the Los Angeles-area in 2018. Adimora is a 6-1, 192-pound four-star who can cover in space and come downhill against the run.

A place like no other 🤘🏾Hook Em’ #Committed pic.twitter.com/RtcWBjx1qe

I’d say at 13. I played basketball my whole life. Football was different, and it was an outlet for me.

There is a different vibe at Texas and there is just something about it. It felt like home and the best move for me.

To be more of a leader to the younger cats in our program. It’s not all about winning. I want to help them become better men and lead them in the right direction.

Playing time was a big factor. No one wants to ride the bench as a freshman. Texas likes to use a lot of safeties and there is a lot of talent at my position. Iron sharpens iron.

Determined. He’s a guy who won’t give up when faced with adversity.

Boundary safety like the Joker position played by DeShon Elliott last year. I love to play against the run.

Texas is ranked 25th? The Longhorns don’t belong on anyone’s Top 25 ballot — yet

Our 10th annual Top 25 countdown: No. 24 LSU has a tough schedule, questions at key spots