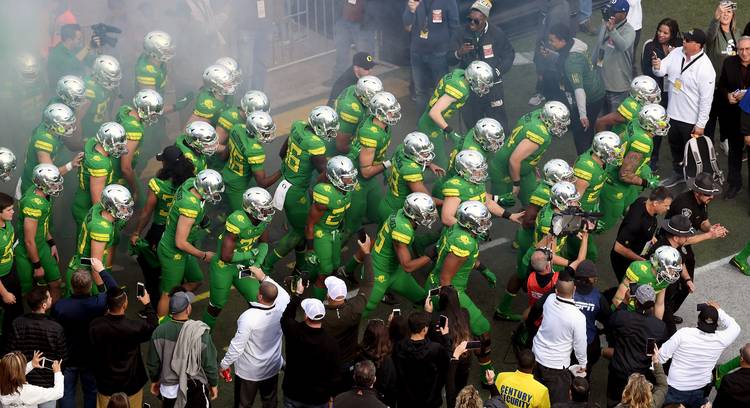 The Oregon Ducks run onto the field as they are introduced before taking on the Boise State Broncos in the Las Vegas Bowl at Sam Boyd Stadium on December 16, 2017 in Las Vegas, Nevada. Boise State won 38-28. The Ducks have a new coach this season for the third time in as many years. (Photo by Ethan Miller/Getty Images)

Their worst-case scenario: Does three years make a trend? The Ducks would prefer not to find out, but a backslide on defense could make for a third straight season of Oregon being an afterthought in the Pac-12 race — the Ducks’ last conference title was in 2014.

RELATED COVERAGE: Ten things to know about the Oregon Ducks

RELATED COVERAGE: A look at Oregon’s 20 best recruits since 2002

Spring cleaning: Receiver Tabari Hines, a graduate transfer from Wake Forest, chose Oregon over Texas and USC. … After no Ducks were drafted in 2017, Oregon sent Freeman and Crosby to the NFL this spring. … Thanks to the signing of 11 four-star recruits, Oregon’s recruiting class ranked third in the Pac-12 and 16th nationally according to 247Sports’ composite ratings. …Chip Kelly, who coached at Oregon from 2009-12, now leads a UCLA team that travels to Eugene on Nov. 3.

Third time’s a charm?: Following Mark Helfrich’s firing and Willie Taggart’s hiring at Florida State, Cristobal becomes Oregon’s third head coach in the past three seasons. Cristobal was Oregon’s co-offensive coordinator in 2017; he retained five of Taggart’s assistants. One of those returning coaches is defensive coordinator Jim Leavitt, who saw Oregon allow 12.4 points per game less than it did in 2016. At 29 points per game, Oregon still ranked eighth in the Pac-12 in scoring defense.

Picking up where he left off: Two years ago, Herbert became the first true freshman to start at quarterback at Oregon since 1983 and he had a six-touchdown game against Cal and a 489-yard game against Arizona State. A collarbone injury slowed his progression in 2017 and led to the reminder of Burmeister on Oregon’s depth chart. Herbert, however, enters this season having thrown for a touchdown in each of his last 15 games. No quarterback in school history has gotten to 3,000 career passing yards quicker than Herbert.

Running game questions: The Ducks will have a tough time replacing Freeman, the school’s all-time leading rusher who trailed only Heisman Trophy finalist Bryce Love and Colorado’s Phillip Lindsay on the conference’s all-purpose yards chart in 2017 (136.6 per game). No Duck ran for more than 45 yards in the team’s spring game. Brooks-James, though, ran for nine touchdowns and averaged 7.6 yards per carry during his sophomore season in 2016.

The key game: Sept. 22, Stanford. Is Oregon back? The Ducks won’t know over the season’s first three weeks (their non-conference foes combined for a 4-32 record in 2017). But Stanford, a perennial power that has won its last two matchups with Oregon by a combined score of 101-34, will provide a much tougher test.

Texas coaches Mike White, Edrick Floréal to each receive base salaries of $450,000