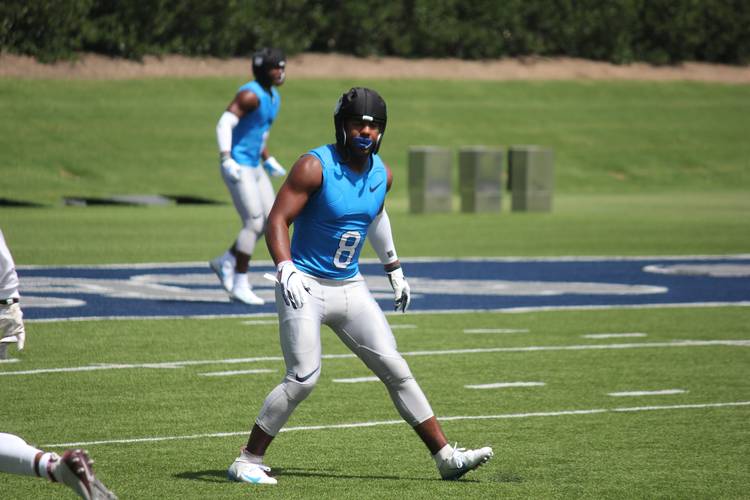 There aren’t many athletes who still participate in two college sports except for track. The demands placed on them are too high, the time requirements too long. By the time football season ends, basketball is already in conference play. Baseball and track are the only sports that the calendar allows for two-sport stars to flourish.

Mansfield Legacy safety and center fielder Jalen Catalon wants to change the trend and play football and baseball at the college of his choosing. He’s considering Texas, Arkansas, TCU, Clemson and Oklahoma. The 5-9, 180-pound four-star plays all over the field for Legacy in football, excelling as a quarterback and a defender. He’s in no rush to pick a school.

“I’m a football player at heart, but baseball keeps my options open,” Catalon said Monday at The Opening Final in Frisco. “Some people rush into a decision and I don’t want to be that guy.”

Catalon is the top remaining target for Texas at safety after landing fellow four-star Chris Adimora on July 1. Catalon can play deep safety or nickel, where his lack of height becomes less of a detriment. The Longhorns are strongly in the mix. Texas’ safety coach, Craig Naivar, is a baseball fanatic.

Catalon has already met with UT baseball coach David Pierce about the possibility of playing both sports and was given the green light.

“Coach Pierce is a great dude and they had a great run. It opened my eyes to what I could be a part of at Texas.”

Arkansas, TCU, Clemson and Oklahoma are also in the mix. He’s taken an official visit to Clemson and has four remaining. He wants to major in communications and is doing real research into every institution he’s considering.

“I want to know everything about the school before I decide,” he said. “The coaches tell me the offer is still there. If you get a project and it is not due to until December, why turn it in early?”

He’ll play whatever position is asked of him at the next level.

“I know I can play deep safety. I play center field, so I’m used to being back there,” Catalon said. “It is the college’s decision, though. If they want to play nickel, I’ll play nickel.”

Catalon isn’t the only Mansfield Legacy prospect that Texas is hunting in the 2019 recruiting cycle. The Longhorns want Carter, a three-star defensive lineman. The 6-3, 260-pound prospect released a top five that included Texas, TCU, Texas Tech, Michigan State and Arkansas. He made his way to Austin for the Heat Wave pool party in June. He picked up an offer from Texas on May 21.

“Jalen and I are very close. That’s my little brother,” Carter said at the Heat Wave event. “We talk about playing at the same spot, but it comes down to decisions. Some places may have open spots at safety but not at defensive line, or the other way around. It can be hard.”

Texas wants to sign five defensive linemen in the 2019 class. T’Vondre Sweat, a three-star end from Huntsville, and Peter Mpagi, a fellow three-star end, are the only two players committed at the position. Texas is still pursuing the likes of Carter, Jermaine Johnson and Texas A&M commit DeMarvin Leal.

Our 10th annual Top 25 countdown: No. 24 LSU has a tough schedule, questions at key spots