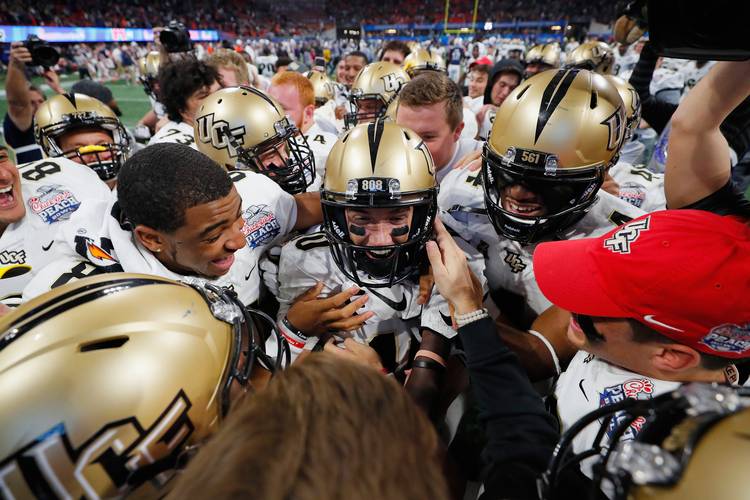 McKenzie Milton (10) of the UCF Knights celebrates with teammates after defeating the Auburn Tigers 34-27 to win the Chick-fil-A Peach Bowl at Mercedes-Benz Stadium on January 1, 2018 in Atlanta, Georgia. UCF was the country's only undefeated team in 2017. (Photo by Kevin C. Cox/Getty Images)

The Knights’ best-case scenario: It should shock no one if the Knights go 12-0 again. Replacing Scott Frost as coach will not be easy but former Missouri offensive coordinator Josh Heupel brings energy to an offense that led the nation last season. QB McKenzie Milton passed for more than 4,000 yards and has enough capable players for an encore performance. Central Florida will probably be favored in every game. Although it’s unlikely they’ll be in the College Football Playoff, the Knights should be in the running for a profitable bowl game.

Their worst-case scenario: The Knights went unbeaten in the AAC last season, though three of those wins were by 10 or fewer points. SMU, Navy and South Florida were within striking distance and could knock off the conference champs if UCF’s offense dips without Frost. Central Florida could drop to 9-3 if a few of their key players get hurt. While the offense should put up big numbers, success will ride with a defense that allowed 25 points in league games in 2017.

RELATED COVERAGE: Can UCF break the Group of Five firewall into the College Football Playoffs?

Spring cleaning: Heupel, who was the 2000 Heisman Trophy runner-up as Oklahoma’s quarterback, has elected to keep the same playbook terminology that Frost used at UCF because both coaches share multiple offensive concepts. … TE Michael Colubiale (10 catches, 222 yards last season) was granted a sixth year of eligibility in June. He was redshirted in 2015 following an injury. … WR Tre Nixon, who transferred from Ole Miss in January, is eligible to play this fall, the NCAA has ruled. He redshirted in 2016 and caught one pass for 19 yards in 2017. … A possible breakout player might be sophomore Greg McCrae, who rushed for 57 yards and a pair of touchdowns in the spring game.

Feel the Heup: At Missouri, Heupel called all the plays. Although the Tigers passed frequently (309 yards per game), they kept defenses guessing with a consistent running attack (193 ypg.). On last year’s All-SEC team, Missouri placed the first-team quarterback (Drew Lock) plus a second-team receiver (J’Mon Moore) and tight end (Albert Okwuegbunam). Missouri ranked No. 8 nationally in total offense, 36th in rushing, 14th in passing and 14th in scoring.

13-0 — ’nuff said: The UCF website for athletics recognizes the football team as the 2017 national champions, noting that the Knights were the only unbeaten team in the nation. For the record, Alabama was declared the national champion after beating Georgia in the CFP title game. The wire services recognized UCF’s achievement — the Knights had their highest finishes ever in the Associated Press (6th) and coaches polls (7th).

Big teams on deck: The Knights will face some big name teams in future years. The 2019 team will play Stanford. The 2020 team will play North Carolina and Georgia Tech. UCF and Louisville have signed a home-and-home series for 2021 and 2022. They were supposed to travel to Austin in 2023 to play Texas, but Texas canceled that game in May in order to make room on the schedule to instead play Alabama that year.

The key game: Nov. 23, at South Florida. The regular-season finale should determine the American Athletic Conference’s champion and runner-up.

Coming tomorrow: Our No. 21 team

Texas coaches Mike White, Edrick Floréal to each receive base salaries of $450,000