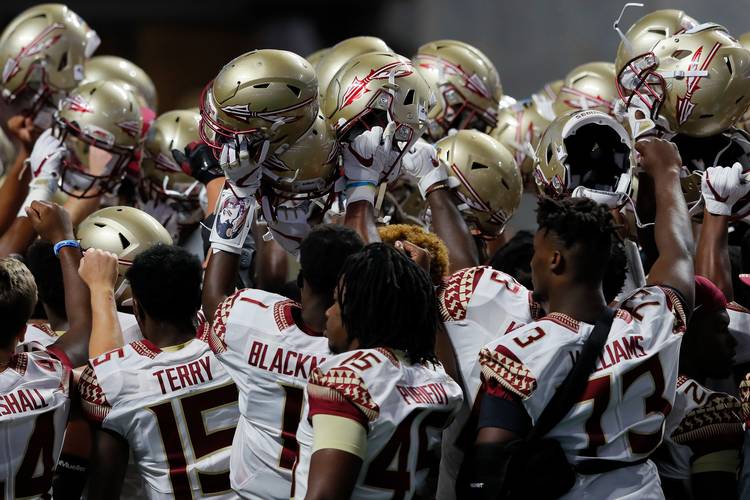 The Florida State Seminoles huddle prior to their game against the Alabama Crimson Tide at Mercedes-Benz Stadium on September 2, 2017 in Atlanta, Georgia. The Seminoles have a new coach for 2018 --- former Oregon coach Willie Taggart. (Photo by Kevin C. Cox/Getty Images)

Sure, it’s July. But it’s never too early to talk college football. Here’s your daily fix — the final installment of our annual countdown of the preseason Top 25, as selected by the American-Statesman sports staff. Last year’s eventual CFP semifinalists were ranked Nos. 1, 5, 8 and 14 on our 2017 list.

Their worst-case scenario: The offense suffers growing pains as it adjusts from former coach Jimbo Fisher’s pro-style offense to the power spread favored by Taggert, a young defense is exploited by the ACC’s better teams, and the Seminoles find themselves battling for six wins and a bowl berth.

Spring cleaning: The biggest hole to fill may be at the top after Fisher, who went 83-23 and won a national championship in eight seasons at Florida State, left for Texas A&M. But the Seminoles have some gaps in their lineup, too; most of their top receivers left, including star tight end Ryan Izzo. Florida State’s defense took an even bigger hit, and Taggert and new defensive coordinator Harlon Barnett must find a completely new linebacking corps as well as a replacement for all-American safety Derwin James.

Willie’s way: Taggart, a Florida native, left Oregon after just one season in order to take over what he has called his “dream job.” He made a positive impact in his lone season at Oregon; a year after going 4-8, the Ducks went 7-6 in 2017 behind an explosive offense that averaged 419 yards and 32.6 points a game. Taggart has a background in power spread offenses and loves to run the ball. Last season, the Ducks ran for more than 247 yards per game.

All eyes on one knee: If Francois can recover from the season-ending knee injury suffered in last year’s first game and if sophomore backup James Blackman continues his development, the Seminoles may have the weapons to implement Taggart’s fast-paced attack. Sophomore running back Cam Akers lived up to his recruiting hype by rushing for 1,024 yards and seven touchdowns as a freshman, and Florida State’s offensive line includes several veterans, including all-conference center Alec Eberle.

A walk-on with a big name: Caleb Ward, the son of former Florida State Heisman Trophy-winning quarterback Charlie Ward, joined the Seminoles as a walk-on wide receiver in June. The younger Ward, a lightly recruited player who fielded offers from schools such as McMurry University in Abilene, played for his father at Booker T. Washington High School in Pensacola, Fla. Charlie Ward led the Seminoles to the program’s first of three national championships in 1993 before beginning an 11-year career in the NBA. He accepted a job as an ambassador for Florida State’s football program earlier this year.

The key game: Oct. 6, at Miami. Before the Seminoles can challenge Clemson for the ACC title, they’ll have to re-establish dominance in this Sunshine State rivalry. Conference hierarchy and an edge in the rich recruiting fields of South Florida will be on the line.

This school is on Texas’ schedule this year. Last year too, for that matter.

Commitment 101: Texas nabs a speedster on the outside with four-star Demariyon Houston