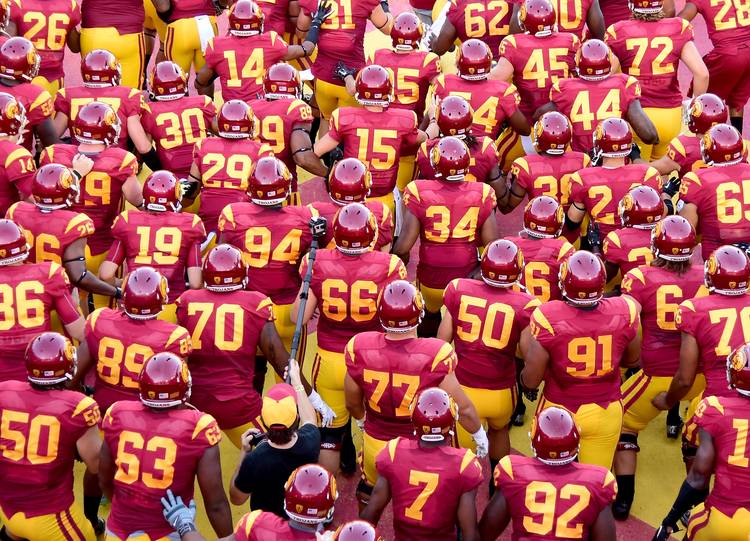 The USC Trojans, shown here walking out onto the field in last year's Stanford game, have some roster issues to figure out. At the top of the list: Who will be the starting quarterback? (Harry How/Getty Images)

The Trojans’ best-case scenario: Even with questions at quarterback, USC still holds a particular sway over the rest of the Pac-12. A nine- or 10-win season is still there for the taking.

Their worst-case scenario: There are questions at quarterback, so a 6-6 season or 7-5 season could be dead-ahead. Of three potential candidates, two have never taken a collegiate snap.

Spring cleaning: The Trojans will have a totally new look on offense after losing key starters, most notably Darnold. Sophomore Matt Fink and redshirt freshman Jack Sears both split time at quarterback while Aca’Cedric Ware got the lion’s share of time at running back. The defense is also rebuilding after losing its top sack leader and pass rusher. LB Porter Gustin turned heads this spring with his pass-rushing skills. The secondary will be a strong suit as most of its members return, although USC’s pass defense ranked 82nd nationally last season.

Filling Sam Darnold’s large shoes: Fink is the only viable quarterback option who has game experience. And it isn’t much. He played in mop-up duty against Oregon State and Notre Dame last season. Sears sat back and redshirted. JT Daniels, a highly-touted recruit, did not enroll until June, which probably pushes back his readiness to mid-season. The Trojans could struggle initially on offense.

Can the Trojans run?: Texas fans will be relieved to see that Jones is gone, too. His 56-yard scramble-and-score just before halftime last season left tongues wagging. So what to make of USC’s running game this season? Ware has three 100-yard rushing games on his résumé. It helps that four offensive line starters return, though the unit needs more depth.

Shot in the arm for the secondary: Out in the wild, wild Pac-12, defensive backs are at a premium. USC struggled with pass defense last season. Fortunately, most of the secondary returns, and USC got a talent infusion. The locals were impressed by early enrollee Talanoa Hufanga, who made several practice interceptions. It’s normal to see six defensive backs on the field, so pass coverage is critical.

The key game: Sept. 15, at Texas. The Texas rematch will be a major game for both sides. The Trojans and Longhorns are both retooling their offenses, but this time USC is coming to Royal-Memorial Stadium to face 100,000-plus UT fans.

It’s our second Big 12 team of the poll.