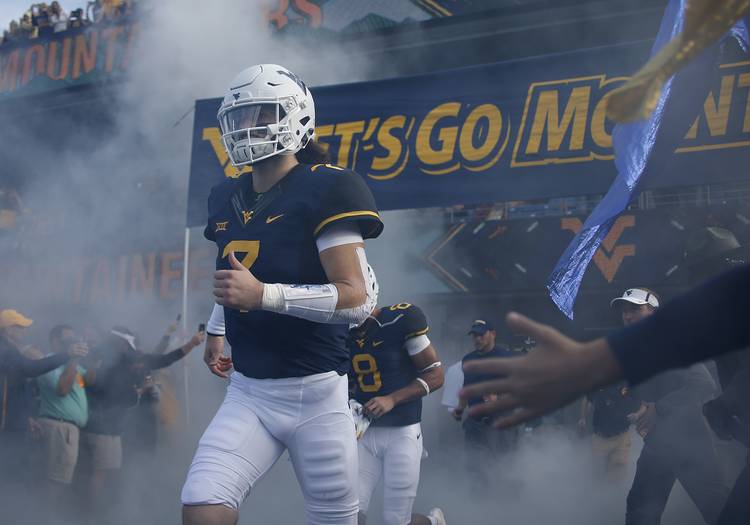 Will Grier (7) of the West Virginia Mountaineers takes the field against the Iowa State Cyclones at Mountaineer Field on November 04, 2017 in Morgantown, West Virginia. Coming back from a late-season injury, Grier is the key to a potentially explosive Mountaineers passing game. (Photo by Justin K. Aller/Getty Images)

Their worst-case scenario: WVU fails to find a running game and doesn’t fix its problem stopping the rush or rushing the quarterback.

RELATED COVERAGE: The state of Georgia has been good to WVU recruiting

Spring cleaning: WVU received good early news when both quarterback Will Grier and receiver David Sills opted to return for their senior seasons. Grier was coming off finger surgery, which probably played into his plans to stay in Morgantown. … Holgorsen hired Marquel Blackwell, a one-time star quarterback for South Florida, to coach the running backs. Blackwell had coached for a year at Toledo. While there, two of his backs led the MAC in rushing, including Kareem Hunt, who led the NFL in rushing last fall. Blackwell replaced Tony Dews, who had served two coaching stints with the Mountaineers and left to coach for the Tennessee Titans. … West Virginia was forced to cancel its spring game because of bad weather.

No passing fancy: At least on paper, West Virginia has the best passing attack amongst Power 5 schools. Grier, who threw for nearly 3,500 yards last season in 11 games, is back. He’s a likely darkhorse candidate for the Heisman. Sills led the nation with 18 touchdown receptions. He also caught 60 passes for 980 yards. Gary Jennings also returns. His 97 catches last fall were the second highest among Power 5 receivers. Then there’s Marcus Simms, who is one of the fastest wideouts in the league. He averaged nearly 19 yards a catch last fall. Plus, after sitting out last fall, former Alabama receiver T.J. Simmons will push for a starting job.

2018 A.C. (After Crawford): WVU’s offense needs to have a running element to make it work. The Mountaineers lost Justin Crawford, who posted consecutive 1,000-yard seasons. Kennedy McCoy is the next guy in line. And he’ll have the luxury of an established offensive line which returns four starters. Three of them graded out at more than 80 last year by Pro Football Focus. The tackle combo of Colton McKivitz and Yodny Cajuste could be the strongest in the Big 12 and will certainly help Grier put up big stats.

Welcome to Morgantown: Holgorsen continues to bolster his team via the transfer route. This time he’s using older players to bolster his defensive line. One guy to watch is former USC defensive tackle Kenny Bigelow, a one-time five-star recruit. Bigelow missed the 2014 and 2016 seasons because of severe knee injuries. He was a reserve last fall, then retired from the sport. However, he had a change of heart. The NCAA granted him a sixth year of eligibility and he’ll spend it in Morgantown. Former Clemson defensive lineman Jabril Robinson also will help. He signed with WVU in May. Former Penn State tackle Brenon Thrift came out of spring as a backup.

This school’s head coach was once a Longhorns assistant.