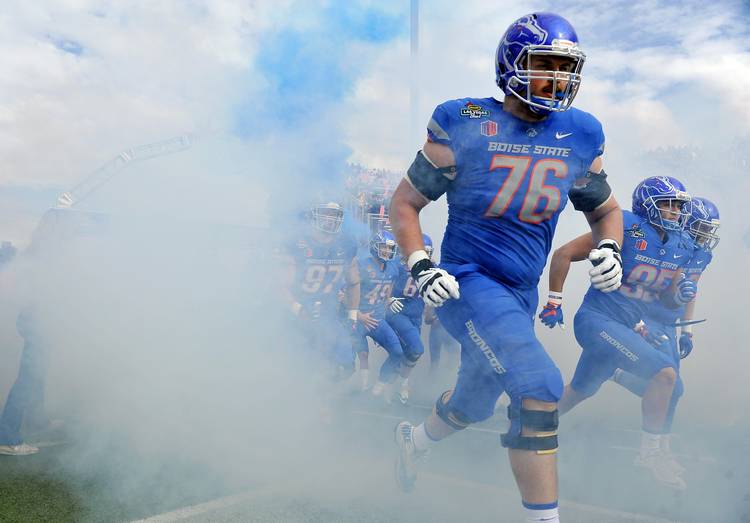 Ezra Cleveland (76) of the Boise State Broncos runs on the field before the start of the Las Vegas Bowl against the Oregon Ducks at Sam Boyd Stadium on December 16, 2017 in Las Vegas, Nevada. Boise State won 38-28. (Photo by David Becker/Getty Images)

Their worst-case scenario: Quarterback Brett Rypien, a fourth-year starter, takes a step back in production after the Broncos lost their two most dependable pass catchers.

Spring cleaning: The offense will have some huge shoes to fill in the pass-catching department with the loss of wideout Wilson and tight end Jake Roh. Running back Ryan Wolpin is gone. The offensive line will be missing center Mason Hampton. The coaching staff lost defensive line coach Steve Caldwell to Arkansas and cornerbacks coach Ashley Ambrose to Colorado. They are replaced by Chad Kauha’aha’a and Jeff Popovich, respectively.

Receivers have cleats to fill: Wilson graduated after totaling more than 1,500 receiving yards and seven touchdowns last season. Also gone is tight end Roh, who caught 39 balls and nine touchdowns last season. If anything, it’s always a comfort to have experience behind center. QB Brett Rypien comes from good stock. He’s the nephew of Mark Rypien, who led the Washington Redskins to one of their three Super Bowl titles. Head coach Bryan Harsin, a former offensive coordinator at Texas, can concentrate on developing some receivers since he has experience behind center. Look for seniors A.J. Richardson, who averaged 18.1 yards per catch over the final seven games, and Akilian Butler, back from a torn ACL, to step up.

Outlook is sunny, small chance of clouds: The Broncos are listed in the preseason top 20 of most major publications and websites and have a fighting chance, if they start better than they did last season — 2-2 before going 9-1 over their last 10 including a Las Vegas Bowl win over Oregon — to become the first school outside of a Power Five conference to earn one of those four coveted playoff slots. The non-conference schedule isn’t too friendly, however with the opener at Troy and a tough road contest at Oklahoma State, which is transitioning from the losses of offensive stars Mason Rudolph and James Washington.

Mattison matters: Rypien, the FBS active leader in passing yards with 9,876, got some nice headlines, but he didn’t do it alone. Running back Alexander Mattison rushed for at least 110 yards in four games, including a career high 242 yards with three touchdowns in a 59-52 overtime thriller over Colorado State. The rushing total was the third most in program history. Add to that, the team’s 2017 offensive MVP finished strong; after averaging 4.6 yards per carry in the first six games, he averaged 5.7 in the final seven.

Coming tomorrow: Our No. 17 team

This school’s colors are maroon and white.