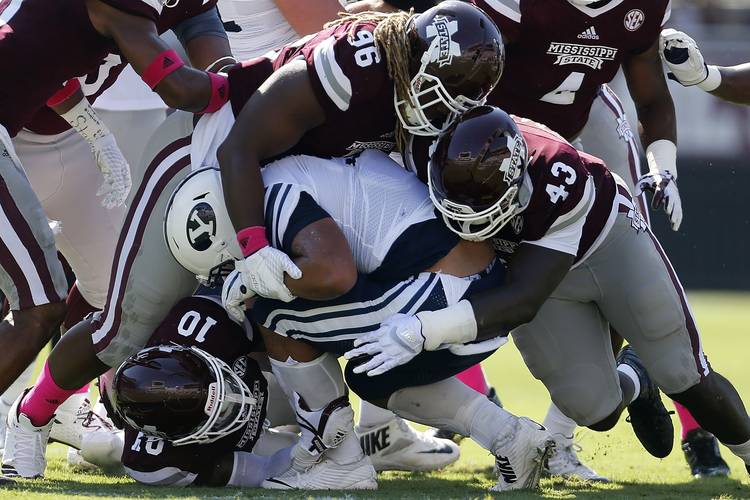 BYU's Ula Tolutau (5) is tackled by Mississippi State defenders Leo Lewis (10), Fletcher Adams (43) and Tre Brown (96) during the first half of a game at Davis Wade Stadium on October 14, 2017 in Starkville, Mississippi. All three Bulldogs players return this season. (Photo by Jonathan Bachman/Getty Images)

The Bulldogs’ best-case scenario: The Bulldogs take to their new leadership and surprise the SEC with a strong run and nine or 10 wins. Even the best of seasons won’t compete with Alabama and Georgia, but it would help ease the loss of head coach Dan Mullen, who’s now at Florida.

Their worst-case scenario: The wheels fall off under new coach Joe Moorhead, who isn’t used to the competition level on the field and in the coaching booth that’s present in the SEC. Missing a bowl game would derail the momentum built under Mullen.

Spring cleaning: The biggest loss for the Mississippi State program since Dak Prescott left for the NFL happened when Mullen left for Florida. He quietly built a consistent program within a tough division of the best conference in the country. How can Mississippi State remain relevant without its leader in a conference featuring Alabama, LSU, Georgia and now a Florida program led by Mullen himself?

A new regime: Mullen led Mississippi State for nine years. Now it’s time for Moorhead, the former offensive coordinator at Penn State, to continue that momentum with a squad full of experience, including quarterback Nick Fitzgerald. Moorhead gets an early chance to prove himself with an out-of-conference contest at Kansas State in the second game.

Focusing on Fitzgerald: Fitzgerald suffered a major leg injury in the regular season-ending loss to Ole Miss. He had thrown for more than 1,500 yards and accounted for 29 total touchdowns before the injury. It’s never easy for a new coach to put a stamp on his first year at a school, but having a senior at quarterback with the experience and respect of his teammates should help Moorhead build some early consistency on offense.

3. Moorhead is known as an offensive guru who excels at play-calling. He’ll rely on Fitzgerald to lead the offense and on new defensive coordinator Bob Shoop to mastermind a talented and experenced defense. The Bulldogs ranked 10th in the country in yards allowed per game and return starters on all three levels of the defense, including two all-conference first-teamers on the defensive line in Sweat and Simmons.

The key game: Oct. 6, Auburn. This game, played one week after Mississippi State hosts Florida, will help define the season. A win keeps the Bulldogs’ SEC West hopes alive. A loss could mean a struggle to reach a bowl game with LSU, Texas A&M and Alabama still on the schedule.

This school has played in 25 straight bowl games, the nation’s longest active streak. It all started with a 1993 Independence Bowl win over Indiana.