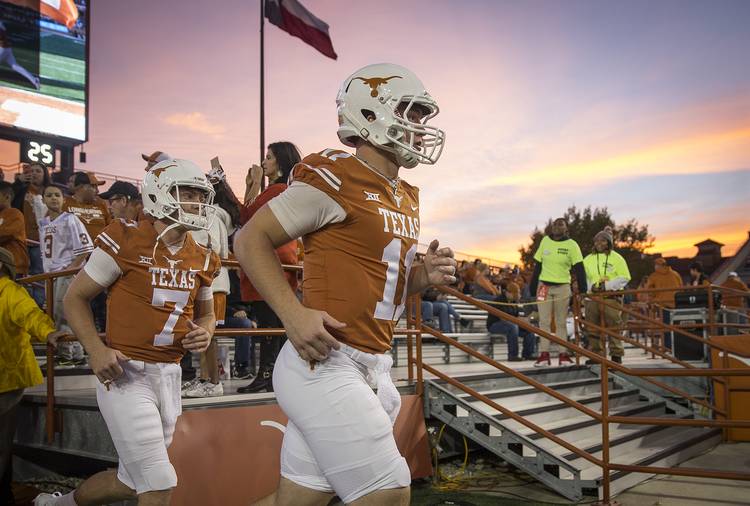 In July 2010, the former Texas coach brought sophomore Garrett Gilbert to Big 12 media days. The quarterback’s only real experience had been stepping in for the injured Colt McCoy against Alabama in the 2009 national championship game. Given that UT nearly pulled off a miracle win, Gilbert had street cred.

Gilbert ended up getting booed out of Royal-Memorial Stadium and transferred.

In July 2013, Brown brought junior David Ash, who was fresh off a stirring win over Oregon State in the Alamo Bowl. “David has grown up. He’s learned a whole lot,” Brown said then. Ash ended up getting hurt in the second game against BYU. Concussions ended his career the following year.

Big 12 media days are Monday and Tuesday at The Star in Frisco, and no Texas quarterback will be present. Iowa State, Kansas, Oklahoma, TCU and Texas Tech will meet reporters on Monday. UT, Baylor, Kansas State, Oklahoma State and West Virginia will be on Tuesday.

As for the Longhorns, it’ll be the fifth straight year that the league’s most glamorous program hasn’t brought the game’s most critical player to the Big 12’s most high-profile preseason event.

That correlates to the Longhorns’ record. Texas is 53-48 this decade, a measly five games over .500. The Longhorns are four games under .500 since the start of 2014. In the Big 12, no quarterback means no chance.

Reporters were allowed to only watch UT’s current crop from a distance this spring. In fact, no Texas quarterback has been made available to reporters since the Texas Bowl.

The program has lacked star power at the position once dominated by Vince Young and Colt McCoy, quarterbacks with a combined record of 75-10 from 2003-09.

There’s nothing wrong with bringing seniors who have earned it. Many coaches view this as a reward and a signal about team leadership. Expect lots of laughs about Hager’s long, billowing hair and Beck’s cast-iron, Terminator-tough foot.

But make no mistake, sophomore quarterback Sam Ehlinger’s past performance and future will be discussed. A lot. He’ll just be back in Austin.

Herman may try to frame a quarterback battle between Ehlinger and junior Shane Buechele. But those around the program believe Ehlinger will be the opening-day starter against Maryland.

Herman loved Ehlinger’s potential last season. He still does, but that feeling waned after Ehlinger cost the Longhorns three potential wins. Herman tried to put the quarterbacks in tight situations this spring. Nobody can gauge Ehlinger’s improvement until September, though.

There’s also good reason to talk about UT’s two freshmen, Cameron Rising and Casey Thompson. Both are probably redshirt candidates, although with new redshirt rules going into effect this season, anything is possible. Starting in 2018, athletes can play in four games and still qualify for a redshirt.

“I hope we all feel a lot better about that quarterback room, right?,” Herman said after the spring game. “Two veteran quarterbacks, I thought looked really good, and you guys got a glimpse of what we’ve seen after the first 14 practices in those young guys.

“So I’m excited about the future of that program.”

The pass-happy Big 12 is a quarterback-dominated leagued. Eight different teams brought quarterbacks to Big 12 media days in 2016. That included Oklahoma’s Baker Mayfield, who became a Heisman Trophy finalist that season and won the coveted award in 2017.

Going to media day, regardless of conference, is the first big step on the road to national awards.

Already this month, West Virginia officials have launched a Heisman campaign for quarterback Will Grier. The website grier7heisman.com has plenty of write-ups, stats and videos to keep anyone busy for hours. Central Florida has also started a similar push for quarterback McKenzie Milton.

Texas hasn’t had a legitimate contender for any national quarterback awards since McCoy in 2009.

If the Longhorns ever hope to compete for championships again, they need better play from the game’s most important position. Until then, the program could be spinning its wheels, away from the Big 12’s center stage.

A Title IX lawsuit casualty, gymnastics program could have been a success for Texas