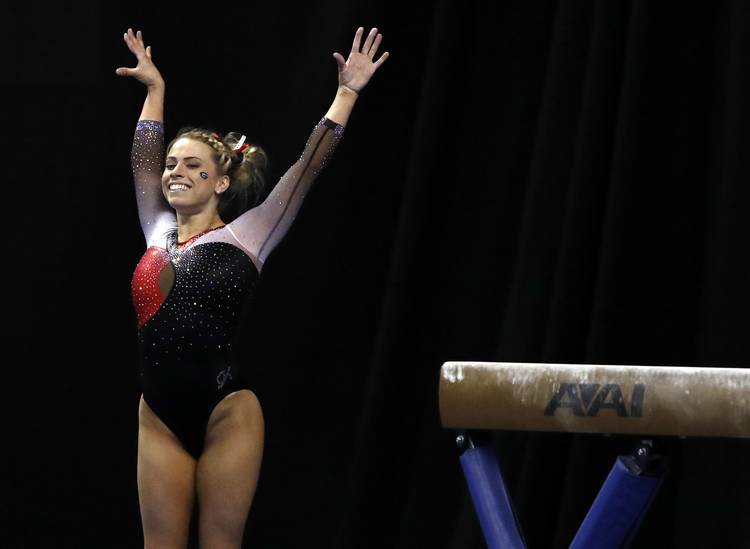 In a Title IX lawsuit settled in 1993, three club teams — rowing, soccer and gymnastics — and softball, a popular intramural sport, had sued the University of Texas. Three of those sports were rewarded with varsity status.

The fourth — gymnastics, the one that could have most become nationally competitive most quickly — did not.

“I told them they could actually make money on gymnastics,” recalled Diane Henson, an attorney for the plaintiffs. “If you had some cute gymnasts doing aerobics, you could pack the Erwin Center. People like to watch gymnastics. But they (UT) didn’t want to touch it with a 10-foot pole.”

Turns out, Henson had a point.

In 2017, four of the top five national college women’s sports for average home attendance — no matter what the sport — were gymnastics teams. The other was South Carolina basketball, with the iconic women’s basketball programs of Connecticut and Tennessee not quite able to crack that elite club.

Mary Lou Retton, the darling of the 1984 Olympics, attended UT at least long enough to marry quarterback Shannon Kelley. Retton once offered to lend her name to a varsity UT program and help in a search for a coach.

Her daughter McKenna is now a two-time All-American and Emma is a prized 2020 recruit. But both say “Geaux Tigers,” rather than “Hook’em Horns,” even though their mom once predicted UT could win a national championship in five years. Most coaches don’t disagree with that.

The top gymnastics programs don’t seem to miss UT, however, to say the least.

“I’m glad they didn’t add one,” said Liz Abel, the senior associate athletic director for communications at the University of Utah whose main responsibilities are two key Utes sports — football and women’s gymnastics. “The rest of us would have been screwed. They’ve got really good club teams in Texas.”

Utah gymnastics averaged more than 15,000 fans, about 10 times more than the school’s women’s basketball team, Abel said. She added that the program has drawn more than 14,000 fans per home meet for 10 years and more than 12,000 fans for the 12 years preceding that.

“We’re the leader in the clubhouse, but others are growing in attendance,” Abel said.

The hottest program, maybe in all of women’s athletics, is LSU gymnastics. For the 2016-17 school year LSU topped 10,000 in attendance for the first time. This year LSU passed 12,000. Although there are other powers, such as Oklahoma and UCLA, the SEC is now the hotbed of the sport; Alabama and Georgia have finished first and second in the NCAA championship four times.

“The fun part is how much the students and the fans get involved,” said Austinite Mackenzie Brannan. She trained 30-40 hours a week for years at Capital Gymnastics, and when her Olympic dream died after 2012, she instead focused on college gymnastics.

Brannan went on to be an All-American at Alabama and a 4.0 student. She said before college, “Gymnastics is very individual. You qualify as an individual, not a team. In college you get to experience team camaraderie.”

UT actually had a varsity women’s gymnastics team when Donna Lopiano arrived as the school’s first women’s AD in 1975. It was gone a few years later.

The reasoning at UT about gymnastics, from Lopiano to Chris Plonsky, comes down to two issues — injuries and Olympic mission, that top college programs are the feeder system for the U.S. Olympic team and college gymnasts are already past their prime in the sport.

As for injuries, that seems to be a given. Even Mary Lou’s daughter had her season ended with a ruptured Achilles tendon this year. Abel won’t dispute that that there are injuries, some of them serious, in women’s gymnastics.

She likened it to a popular men’s sport, football, although it does not appear to have the concussion epidemic of football.

“I think I’ve landed on my head in every event,” said Jade Darrow, an incoming senior who is on UT’s gymnastics club team.

The one that ended her dream of getting a varsity scholarship came in a floor exercise where she planned to do a double flip in the air, but thinks the three toes she broke snapped on takeoff, causing her to under-rotate and land on her neck.

“I’m lucky I didn’t get a concussion,” she said. Or worse. The injury forced her to miss some big competitions where she could have gained some needed exposure and forced her to reexamine her priorities.

She is not alone. Darrow said almost every gymnast she knows who dropped gymnastics because of injury took up one of three sports: Diving, pole vaulting or cheerleading, sports that also have their own risks.

For those who get scholarships to the big programs, the appeal is obvious. The meets can have the electricity of a rock concert and they’re the rock stars.

Darrow, who grew up in Long Island, says it’s not as much fun when you’re younger.

“The coaches always say you have to win. You have to be first,” she said. “And if you didn’t win they’d yell at you. Practices got harder. You feel like you let people down.”

She said with the club, “We enjoy not having the stress … It’s fun.”

On UT’s club team, Darrow said the men have paid for a coach but the women don’t have one. The more experienced gymnasts help the others and the guys will lend a hand as spotters.

She said injuries are self-policed. If you’re banged up you can skip a practice, just as you would if you were worried about a big test at school. If one discipline hurts more than others, you work on something else. If you’re worried that you might injure yourself trying a new move, you can choose not to do it.

“There’s no sense in getting hurt in some meet that doesn’t really mean anything,” Darrow said. Still, the year before this one, she said the UT women finished second in the nation in the school club competition in a large field. She said that, with all the club teams in Texas, a UT varsity team could be very good very quickly.

But, 25 years after the Title IX suit, it seems the women of UT’s club gymnastics team are quite content with where they are.