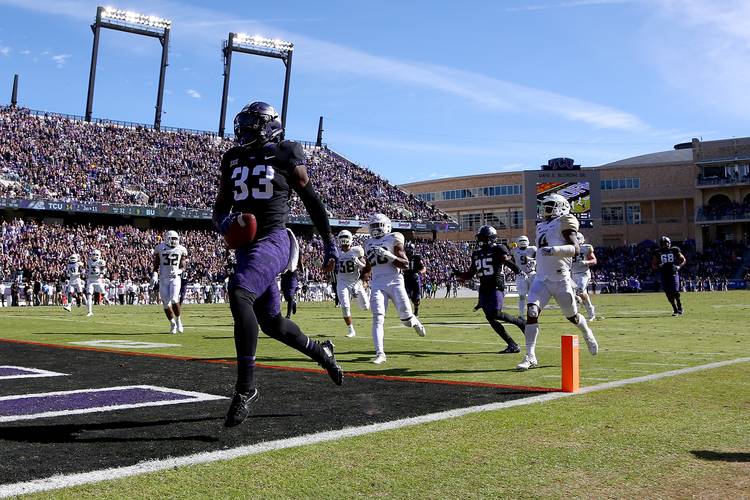 Sewo Olonilua (33) of the TCU Horned Frogs scores a touchdown against the Baylor Bears in the first half at Amon G. Carter Stadium on November 24, 2017 in Fort Worth, Texas. Olonilua caught seven touchdowns last season. (Photo by Tom Pennington/Getty Images)

Their worst-case scenario: New quarterback Shawn Robinson doesn’t mature and TCU takes a real dip on offense. The season could look more like 2016 and 6-7 than last year’s 11-3.

Inside the Horned Frogs

Spring cleaning: Gary Patterson reworked his defensive coaching staff, in part, to give himself a break. Besides his head coaching duties, Patterson also had been in charge of linebackers the past two years. But he made defensive coordinator Chad Glasgow specifically in charge of linebackers. Glasgow played the position at Oklahoma State, but he’d coached safeties at TCU for 17 years. Paul Gonzales moved from cornerbacks to safeties. Patterson then elevated former TCU safety Jeremy Modkins, who had worked as a staff analyst. … Defensive end Ben Banogu decided to return for his senior season and is in the mix for a possible spot in next year’s first round. Earlier this month, he was voted the Big 12’s preseason choice as defensive player of the year. … At the end of spring drills, Patterson said Robinson was at the top of the depth chart. Michael Collins, who transferred from Penn, is in line for the second-string job.

Models of consistency: Patterson probably doesn’t get the attention he deserves nationally, but his Horned Frogs have been a model of consistency. TCU is one of five programs in the country to finish in the final top 10 in at least three of the past four years. The Frogs are 40-13 over that stretch.

Is Robinson up to the task?: Since the Big 12 is a quarterback league, it makes sense to say TCU’s success is contingent on Robinson, who will be a sophomore. He was one of the top dual-threat quarterbacks in the country when he signed with TCU out of DeSoto in 2017. Robinson started one game last fall — on the road against Texas Tech — when Hill was nursing an injury. The Frogs won but the offense didn’t really flow. Robinson’s 84 yards rushing led the team. But he didn’t respond well when Tech forced him to throw. He was 6 of 17 for 85 yards. The offensive line is raw and untested, so the unit probably can’t be counted on save Robinson early in the season. The Frogs are missing four starters from last year’s unit.

There’s Turpin, and there’s Big Turpin: Receiver/returnman KaVontae Turpin, on paper, is the most dynamic offensive player for TCU. He probably was at his best on special teams and averaged 16.2 yards per punt return and 30.8 on kicks last year. There’s another player Patterson really likes — freshman Taye Barber, who is a bigger version of Turpin. Watch to see how many touches he gets as TCU finds its offensive identity.

Note: TCU-Ohio State will play at AT&T Stadium in Arlington; TCU lost to Oklahoma again in the Big 12 title game

This school has won one Heisman Trophy but has had players finish runner-up six times — including last year.

A Title IX lawsuit casualty, gymnastics program could have been a success for Texas

Our 10th annual Top 25 countdown: As far as No. 14 Stanford’s concerned, all you need is Love