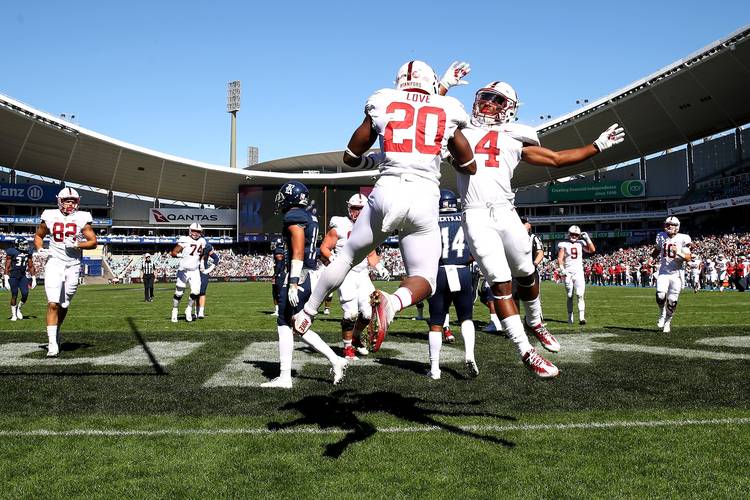 Bryce Love and Jay Tyler of Stanford celebrate Love scoring a touchdown during the College Football Sydney Cup match between Stanford University (Stanford Cardinal) and Rice University (Rice Owls) at Allianz Stadium on August 27, 2017 in Sydney, Australia. Love, who finished second in the Heisman Trophy voting behind Oklahoma's Baker Mayfield, is back for 2018. (Photo by Mark Kolbe/Getty Images)

The Cardinal’s best-case scenario: Bryce Love lives up to his billing as a Heisman Trophy front-runner and Stanford survives the first half of its schedule, which includes September meetings with USC, Oregon and Notre Dame.

Their worst-case scenario: What was an OK defense in 2017 can’t overcome the loss of three players to the NFL draft while quarterback K.J. Costello, who missed spring practices with a hip injury, struggles to beat teams that focus on stopping Love.

Another Heisman shot: Oklahoma quarterback Baker Mayfield recorded a lopsided win in the race for last year’s Heisman Trophy, but Love finished second on the ballot. The only returnee among the top-five vote-getters, Love should be favored to win Stanford’s first Heisman since Jim Plunkett in 1970. Last year, Love inherited the Doak Walker Award from former Texas standout D’Onta Foreman and set a school record when he rushed for 2,118 yards. His 301 yards in a 34-24 victory over Arizona State is also a new Stanford standard.

Clearning a path for Love: Love will run behind some familiar faces as six returners on Stanford’s offensive line have logged at least six starts in their career. (Three have at least 19 starts). Senior fullback Reagan Williams also has appeared in 21 games over the past two seasons.

Shaw and Pop at the top: In seven seasons, Shaw (73-22 at Stanford) won 28 more games than his three predecessors did in nine years. Shaw and Pop Warner (71 wins from 1924-32) are the only coaches to win more than 70 games at Stanford.

The key game: Nov. 3, at Washington. The Huskies have been a top 10 team the last two times that they’ve met Stanford and the teams have split those two games. A 30-22 decision in last year’s duel went to the Cardinal, a result that was notable when it came to the Pac-12’s championship game since Stanford and Washington ended up tied atop the conference’s North division. The Cardinal play on a Thursday, Friday and Saturdays this season.

Texas once played this school on a Sunday.

Big 12 rebuild? After strong year, league heads into 2018 with more questions than answers