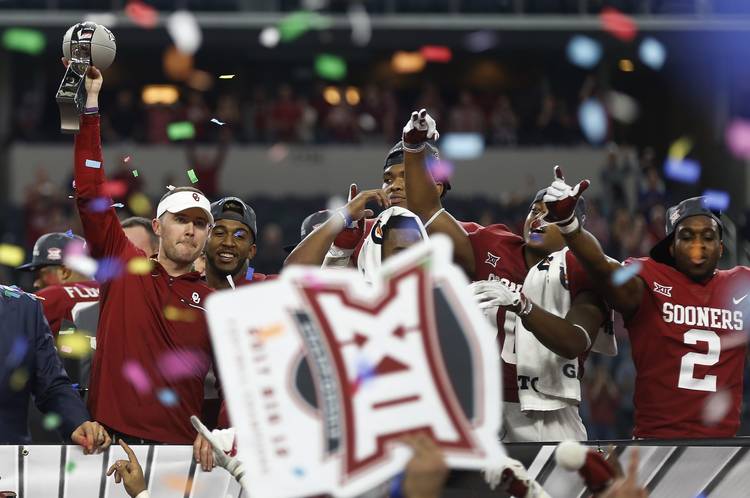 From the looks of things, the Big 12 had a terrific football year in 2017.

Oklahoma represented the league in the College Football Playoff and produced a Heisman Trophy winner. Three teams had 10-win seasons, and eight played in bowl games. The league’s 5-3 postseason mark was second among the Power Five conferences.

But this year looks like a rebuilding one for the league. Big 12 media days are Monday and Tuesday at The Star in Frisco, and there’s a real question as to whether this conference has enough star power.

Oklahoma, West Virginia and TCU have garnered most of the preseason hype. The Longhorns are gathering momentum in coach Tom Herman’s second season. Kansas State is always going to be well-schooled under Bill Snyder. Iowa State is game, too.

Here’s a look at some of the key issues heading into Big 12 media days, which always serve as the unofficial kickoff to the season.

1. Is Will Grier the Big 12’s best Heisman candidate?

Kudos to the West Virginia sports information office for getting Grier’s name out there this month. And why not? Grier is the league’s best returning quarterback. He averaged 317.3 passing yards per game last season before suffering a broken hand diving for the pylon against Texas.

The Mountaineers were 10-3 under Dana Holgorsen in 2016 but took a step back to 7-6 last year. Defense was a big reason why. West Virginia allowed 445.5 yards per game, the third-worst total in the league.

Onlookers always gave Oklahoma the benefit of the doubt when Bob Stoops was in charge. But the visor-wearing veteran is well into retirement these days, and Riley led the program for a full offseason. The Sooners got into the CFP last season thanks to Mayfield. But what now?

Frankly, it’s hard to gauge whether OU will be it’s suffocating self or just above-average, which is still better than most. Quarterback is the biggest issue, obviously.

Kyler Murray was drafted ninth overall by the Oakland A’s to play baseball and reportedly got a $5 million signing bonus. This will be his last season wearing crimson and cream. Does Murray getting the starting nod, or will it be Austin Kendall?

3. Who’s replacing all those playmakers in Stillwater?

Oklahoma State has posted double-digit winning seasons for three straight years, a first in school history. But this one is a total crap shoot. How will coach Mike Gundy replace all that offensive firepower lost? The Cowboys are starting over at quarterback, running back and receiver.

“Start out with the quarterback that doesn’t have any experience,” Gundy told the Tulsa World after the spring game. “At the running back position, I think we’ll be as competitive as anyone in the country. I think we have good players at the wideout positions, we just don’t have experience.”

4. How hot is Kliff Kingsbury’s seat?

When it comes to discussing Kliff Kingsbury’s job security, it’s impossible to overstate the importance of Texas Tech’s late-season win over Texas. That alone may have saved the day. The Red Raiders got a critical sixth win and into a bowl game.

Tech athletic director Kirby Hocutt made the decision to stick with Kingsbury, who now enters his sixth season with a 30-33 record. Tying your fate to that of the football coach is always a dicey proposition.

What’s ironic is that Kingsbury faced exactly the same questions about his future at Big 12 media days last July. This was before Tech went 6-7.

“It just comes with the territory,” Kingsbury said last July. “I think in this profession, if you start looking at other things outside of that game that week, that’s when you get yourself in trouble.”

Big 12 athletic directors will tell you their league provides the best path to the playoffs for its members. It’s the only major conference where all members play each other in a true round-robin fashion. Coaches know if they win all their games, they’re in.

These are the types of games fans want and TV executives practically demand. Alabama’s biggest non-conference opponent this year? Louisville, a team that went 8-5 in 2017.

Monday-Tuesday, the Star in Frisco

Our 10th annual Top 25 countdown: As far as No. 14 Stanford’s concerned, all you need is Love