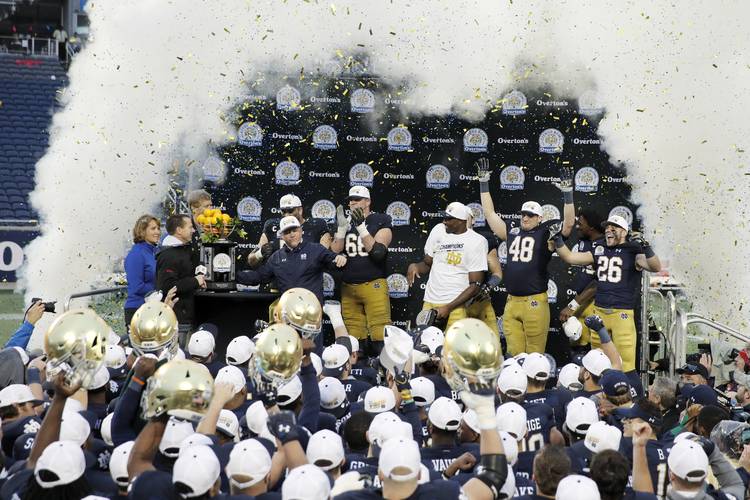 The Fighting Irish’s best-case scenario: Assuming erratic quarterback Brandon Wimbush drastically upgrades his passing accuracy and the depth at running back and wide receiver don’t present a problem, Notre Dame is stacked defensively and poised for a second consecutive double-digit winning season and a possible College Football Playoff berth. Running backs Dexter Williams and the late-charging Tony Jones Jr. have to step up quickly to take the pressure off Wimbush. “We played two quarterbacks in the bowl game,” head coach Brian Kelly told the American-Statesman. “We’re not afraid to play the guys who can get us wins. It’s a pretty healthy situation.”

Their worst-case scenario: If a quarterback platoon falters and it turns to true freshman Phil Jurkovec and if promoted defensive coordinator Clark Lea from linebackers coach doesn’t have Mike Elko’s same magic after the latter left to run Texas A&M’s defense, the Irish could wilt under a formidable schedule that includes Michigan, Stanford, Virginia Tech, Florida State and USC. Notre Dame also is paper-thin at the skill positions after losing its top two running backs and six of its nine best receivers.

Inside the Fighting Irish

Spring cleaning: Kelly doesn’t shy away from the fact that he’s perennially on the hot seat even though he has more 10-win seasons (three) than his three predecessors. “It’s always the hot seat. It’s never cool at Notre Dame,” he said. “It comes with the territory.” … Notre Dame will run the ball effectively behind a loaded offensive line after topping 3,500 yards on the ground with 35 rushing touchdowns last year. … The Irish are loaded at safety with two juniors (Devin Studstill and Jalen Elliott) and a senior (Nick Coleman) returning although none had an interception. Among the newcomers is Navy transfer Alohi Gilman, who sat out last season after making five tackles for losses as a freshman. … Notre Dame has broken ground on an indoor football facility. … The Irish resume their rivalry with Michigan after a short hiatus with home-and-away games and open the season with the Wolverines and announced dates with Alabama in 2028-29. “It’s robust,” Kelly said of the schedule. “We’ve got to start strong and finish even stronger. It’s got to stand up to national scrutiny, and I think it does.” … Wimbush isn’t all that as a passer, but he averaged 8 yards a carry. … A pair of 6-4 juniors in tight end Chase Claypool and Miles Boykin, a one-time four-star recruit, must emerge as big weapons.

Where’s the beef: The Irish have had a very sound strategy when it comes to their vaunted offensive lines: Lose two studs, plug in two more. What’s in the water in South Bend? This has been like clockwork there with the latest departures in two top-10 draft picks. Graduate center Sam Mustipher, who didn’t give up a sack in 2017, and guard Alex Bars are next in line as possible All-Americans with 62 career starts between them, and blue-chip freshman Tommy Kraemer is a star in the making along with tackles Robert Hainsey and Liam Eichenberg.

Lone Star Irish: Notre Dame loves to recruit Texas even though none of its 27-player class in 2018 from 15 states includes a Texan. “It’s a very important state for us,” Kelly said during a fund-raising trip to Austin in June. “We’re gonna have multiple players from the state in the 2019 class. It’s been a great state for us.” … The school has had 498 players taken in NFL drafts, second only to USC’s 502.

Putting the special in special teams: Notre Dame returns both its placekicker and its punter as fourth-year starters after Justin Yoon has hit 42 of 52 career field goals and graduate Tyler Newsome has boomed punts for a 43.8-yard average although he’s not always consistent.

Note: Notre Dame-Navy is at SDCCU Stadium in San Diego; Notre Dame-Syracuse is at Yankee Stadium

The key game: Sept. 29, Stanford. The Cardinal clocked the Irish big-time and sent them on a downward spiral toward the end of last season. If Notre Dame can get past Michigan in its opener and Stanford to close out September, it could serve notice that it’s a legitimate national contender.

This is one of only three schools that has won more all-time football games than Texas.