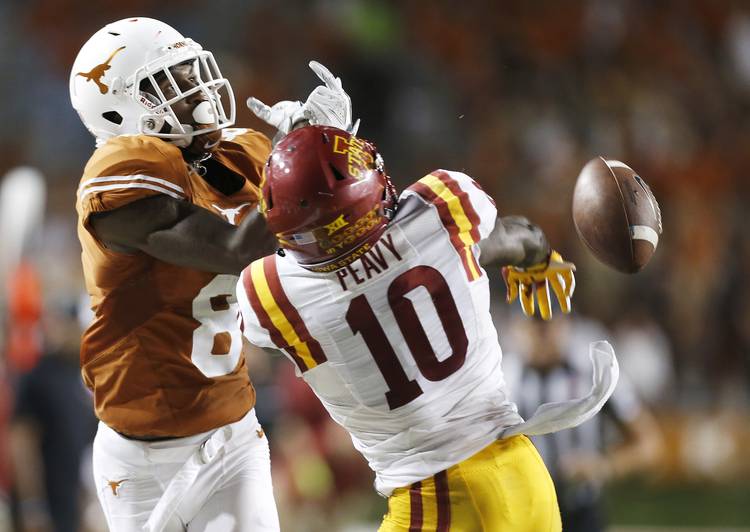 FRISCO — Texas Tech offensive lineman Travis Bruffy joked he would have been tailored for a new suit had he known his head coach was doing so for Big 12 media days.

Perhaps the most fashion-conscious participant at the Ford Center, though, was wearing a basic polo.

Iowa State cornerback Brain Peavy describes himself as an “aspiring designer.” He wants to eventually get into footwear but is just designing apparel now. That includes custom denim jackets, T-shirts and shorts. He has started a clothing line called “Brand Peavy,” and has designed clothes for teammate De’Monte Ruth.

“I think I kind of grew up doing this,” Peavy said. “I’m kind of from a background where everything wasn’t affordable, so you kind of did your own thing. You tailored your own thing. Ripped jeans, I was ripping them.”

Iowa State players wore white polos and slacks on Monday. That was not Peavy’s decision. What look would have Peavy given the Cyclones?

“I probably would have went with a suit jacket, like a sports coat,” said Peavy, an all-conference honoree in 2017. “Probably a button-down with no collar. The no-collar (look) is pretty smooth. Tailored slacks. Probably some tennis shoes, some Vans.”

Bowlsby said he has no idea when the NCAA will complete its investigation. “I don’t have any information on time frame,” he said. “We’re kept informed, but it’s mostly after the fact, and that’s a separate process. We will know what happens, when it’s at the end.”

Bowlsby, on injury reports: Bowsbly said the league hasn’t made a decision as to whether it will release injury information. “My sense is that there’s going to be a human cry for that to happen and as long as we don’t get too far into the specifics of what the injury is and what kind of medication they may be taking and what the duration is and those kinds of things, but some sort of simple system may work,” he said. “We’ve talked about whether or not it gets managed by the conferences or whether it gets managed at a national level, and I think that’s unresolved at this point.”

Born and bred in Lawrence, Dineen is the son of a former Kansas volleyball player. His grandfather was once a running back at the school and his great-grandfather played basketball for Phog Allen. Jay Dineen, Joe’s younger brother, will be a freshman linebacker this fall.

So, who is the family’s top Jayhawk? Dineen gave that honor to his mother, Jodi, who lettered from 1986-89.

“They keep me humble so I’m going to say that my mom will forever, no matter what I do, have the bragging rights in our household,” Dineen said.