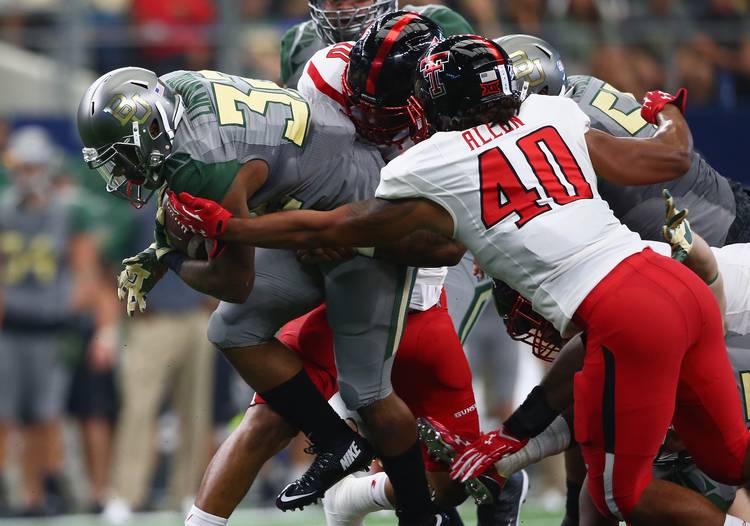 Shock Linwood #32 of the Baylor Bears runs the ball against Dakota Allen #40 of the Texas Tech Red Raiders in the first quarter at AT&T Stadium on October 3, 2015 in Arlington, Texas. (Photo by Ronald Martinez/Getty Images)

FRISCO — Dakota Allen’s tale is one that could’ve had a stereotypical ending. Instead, it may have been the best individual storyline Monday at Big 12 media days.

The Texas Tech linebacker had 87 tackles as a redshirt freshman in 2015. All signs were pointed up. But he was arrested with two teammates the following spring for breaking into a home and stealing a gun safe, according to police.

Tech officials had no choice. Allen was dismissed. He transferred to East Mississippi Community College. Normally, that’s the end of the story for most. Gone and forgotten, never to be heard from again. But this is one about resiliency.

“In this day and age, not only in college football but in anything, there’s not many second chances given out,” Tech coach Kliff Kingsbury said Monday.

Allen helped his new team post an 11-1 record in 2016, all while staying in touch with Tech coaches. The program was featured on the Netflix documentary “Last Chance U,” a fitting name for some on the roster. Not Allen, though.

He completed the terms of a pre-trial diversion set forth by Lubbock County prosecutors in July 2017. Kingsbury and Tech athletic director Kirby Hocutt were convinced he was worth a second chance. The 6-1 athlete from Humble was allowed to once again wear the scarlet and black.

Not only was Allen voted a team captain last season, he led the team with 102 tackles. He ignited a Red Raiders defense that tied for 13th nationally in turnover margin. Allen had a pair of interceptions, a forced fumble and a fumble recovery. In short, Allen was a star.

The same player once dismissed was wearing a sharp blue suit Monday at The Star while representing Texas Tech before regional and national media members.

“I’m still living my redemption story, so it’s not completely over yet,” Allen said. “To all the kids that look up to me, I just want to say that every choice you make has a consequence. If you are able to receive a second chance, you have to take it, run with it and don’t look back.”

Allen admitted the obvious. “There were many times I thought I would never play football again,” he said. He had long talks with his parents Stacey Hawkins and Keith Allen. Now he’s on track to graduate in December with a degree in business management.

“When I saw that he’s handling his business at junior college and got a bunch of positive feedback from that situation, we were willing to basically put our neck on the line and say this won’t happen again,” Kingsbury said. “He’s going to thrive, if anything, and be an incredible story. That’s luckily what it’s turned out to be.”

Allen could have gone anywhere for his final two seasons. Tech safety Jah’Shawn Johnson said Allen felt like he had something to prove in Lubbock.

“He wanted to come back and finish what he started here,” Johnson said. “He’s one guy that I can truly say is a life-long friend.”

With Allen at the controls, Tech’s defense should be the team’s strength early. The Red Raiders have 10 defensive starters returning, a noteworthy number considering the quarterback position is unsettled. Three players are vying for the spot vacated by Nic Shimonek, who threw for nearly 4,000 yards and 33 touchdowns last season.

Kingsbury also said he wants to run the ball more this year. Tech had the league’s worst rushing totals in 2016 but jumped up to sixth last season with 140.9 yards per game.

Defense? Strong running game? Who is this Kliff Kingsbury?

Allen wants to take another step, that’s for sure. He got feedback from the NFL draft advisory committee last season and was projected as a sixth-rounder.

He said it himself; Allen’s story isn’t over yet. With another year of improvement, it could still have a terrific ending.

“My parents, my teammates, that’s what drives me every day,” Allen said. “To make sure I don’t let them down.”