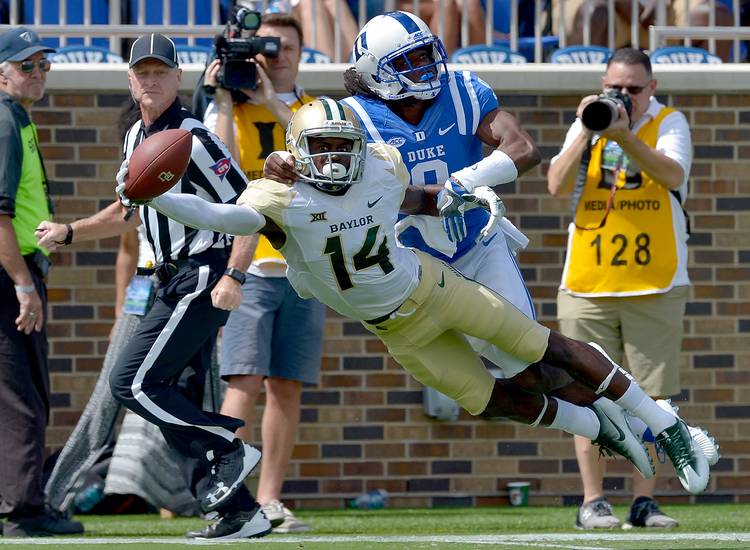 Jeremy McDuffie (9) of the Duke Blue Devils breaks up a pass in the end zone intended for Chris Platt (14) of the Baylor Bears during the game at Wallace Wade Stadium on September 16, 2017 in Durham, North Carolina. (Photo by Grant Halverson/Getty Images)

FRISCO — Chris Platt is the definition of a home run threat.

The Baylor senior wideout from Willis has averaged 18.6 yards per catch since he arrived at Waco in 2014. Five of his 10 touchdowns have covered 70 or more yards. He has earned All-American honors as a member of Baylor’s track team.

Platt missed much of last season with a knee injury, but expressed confidence on Tuesday that he hasn’t lost a step. At Big 12 media days, he also discussed his quarterback — Lake Travis product Charlie Brewer — along with his favorite touchdown and Sam Houston (the former president of the Republic of Texas, not the school in Huntsville):

It was very hard. I’ve never had an injury like that before in my life. I’ve never sat out a game in my life since I started football because of an injury. It was different, it was very different mentally and physically. That first two weeks after surgery was very tough. Mentally, that was tough not being able to play football for that whole season.

Have you regained your speed? Are you the fastest player on the team?

I honestly think I’ve surpassed where I was before I got hurt.

What have been your impressions of sophomore quarterback Charlie Brewer?

Seeing him play once he did play, he grew throughout those games. I saw him grow a lot. He’s a very mobile quarterback who can extend the play with his feet. He also made better decisions along the way in the season. I’m looking forward to his position battle that they do have because his position’s up for grabs for anybody to have. That’s at any position on the team, honestly, with coach (Matt) Rhule, because he doesn’t like depth charts.

Of your long touchdowns, which one is your favorite?

I think the most memorable one is the screen in Duke. The one that was (73) yards. … We were kind of dead, so having that play being done brought life back into the team. (Platt’s third-quarter score brought Baylor within 21-14 but the Bears went onto lose a 34-20 decision in that 2017 meeting).

What’s the hardest assignment you’ve ever had in college?

The hardest assignment was from world history. I had to do a 20-page research paper and I chose Sam Houston to do that on.

What was something that you learned about Sam Houston?

People backlashed him for having slaves, but he only had it for his political reasons. He honestly did not like the idea of slavery. He wanted Texas to abolish.

West Virginia’s Will Grier may not be focused on the Heisman, but his family is

Texas’ goal in 2018? It’s all about the running game: Find one on offense, stop the run on defense