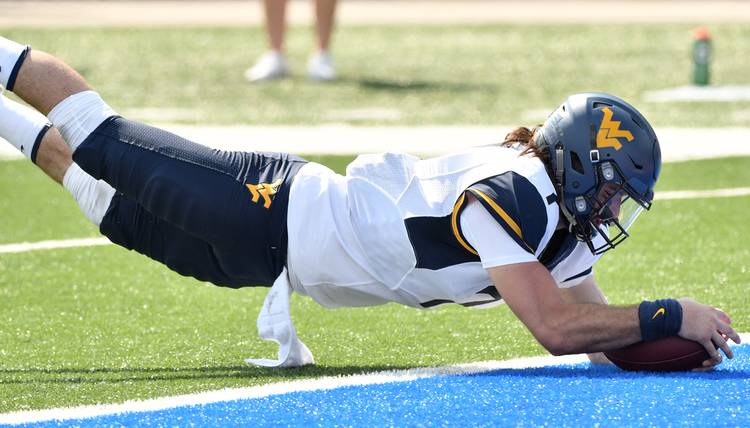 Quarterback Will Grier of the West Virginia Mountaineers dives into the end zone for a touchdown against the Kansas Jayhawks in the fourth quarter at Memorial Stadium on September 23, 2017 in Lawrence, Kansas. (Photo by Ed Zurga/Getty Images)

There also are emotional hooks that’ll bring a player publicity. And stars for the blue-blood programs have near automatic entry into the annual award’s posh ceremony in New York.

Then there’s Will Grier, the West Virginia quarterback who is the highest-profile player in the Big 12.

No doubt, Grier will have the stats to give him Heisman consideration. Maybe the Mountaineers will accumulate enough wins. They’re picked second behind Oklahoma as preseason favorites to reach the league title game.

But he has an advantage like no other player in the country because Grier comes from a family of social media geniuses. Kid brothers Hayes and Nash, along with little sister Skylynn, became viral superstars thanks to Vine, the now defunct short video-clip sharing service.

The three of them, collectively, have transitioned to other social media platforms and have millions of followers on Twitter, Instagram and YouTube. Hayes even competed on the reality show, “Dancing with the Stars.” Time magazine named him as one of the 30 most influential people on the Internet.

And the younger siblings love to share news about their big brother, who really wants no part of self-publicity. Imagine what content they could send to millions if West Virginia beats Tennessee in its season opener and knocks off North Carolina State in mid-September? The Mountaineers’ schedule sets up for a November of potential Heisman moments with games against Texas, TCU, Oklahoma State and Oklahoma.

“I don’t know how much these campaigns really influence the voters or not,” Grier said Tuesday. “I’m not very familiar with how the process works. I’m not really focused on that.

“My little brothers love football. They used to play the game of football as well. Kind of been in my family for a long time. The campaign I think is great, it would be an honor to hold that trophy and bring it back to the state of West Virginia. It’s not really a focus of mine.”

While big brother was attending the Big 12 media days finale, Nash Grier retweeted a story about Will being named to the Davey O’Brien top quarterbacks watch list. He did the same last week when Grier was voted the preseason favorite for conference offensive player of the year.

West Virginia launched Grier’s official Heisman campaign earlier this month. It has its own web site — grier7heisman — and a #willtowin hashtag.

Holgorsen gave his permission for the campaign launch. Coaches love it when players when awards. They’re not fond of distractions caused by said award campaigns. But Holgorsen said Grier, who already is a husband, father and college graduate, can handle the attention.

“I would never approve a campaign unless I felt like a player could handle it,” Holgorsen said. “That’s my job as far as managing players and Will is an oolder, mature coach’s kid. I’ve made this comment several times. He’s ready for this, he’s prepared himself his whole life for us and you will see as you talk to him throughout the course of the day, I got no worries about him not understanding expectations and how to deal with expectations.

“He’s a very mature kid. He can handle this. He’s prepared.”

Grier signed with Florida, a definite national blue-blood program, out of high school. He was 5-0 his redshirt freshman season in 2015. But his Gators career suffered a sudden end when he tested positive for a banned substance that was an ingredient in a protein powder.

Grier left Gainesville and signed with West Virginia. After sitting out the 2016 season, he threw for 34 touchdowns and 3,490 yards. His season ended last November when he dislocated his throwing hand while trying to score against Texas.

He’s fine now, although Grier wants everyone to know he’s not focused on the Heisman.

But it would be nice, he says, “to bring the trophy back home to West Virginia.”

Eyes on the Heisman

Who is in the early Heisman conversation? Four possible early candidates:

Ed Oliver, Houston DT: He may be best defensive player in the country.