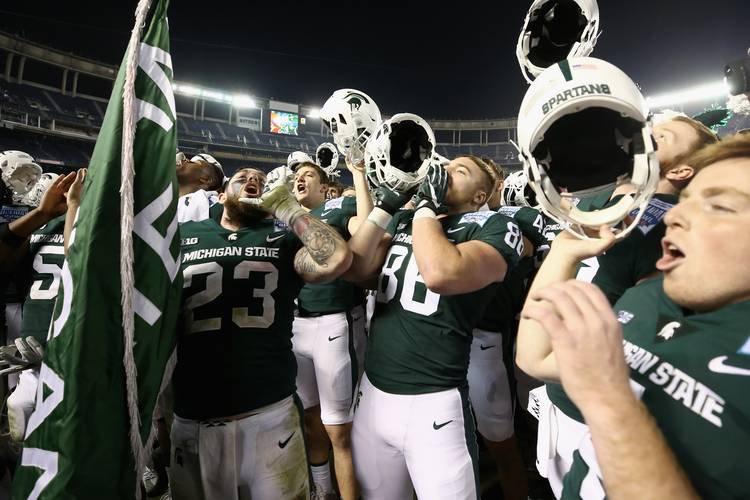 The Spartans’ best-case scenario: The Spartans overcame inexperience in 2017, rebounding from an uncharacteristic 2016 campaign to win 10 games. They should be even better in 2018 and a run at a Big Ten title and a berth into the College Football Playoffs is the goal. We’ll know more about Michigan State after its matchup with Michigan on Oct. 20.

Their worst-case scenario: Last year’s 10-win season sets the expectations too high and the Big Ten schedule humbles the Spartans in 2018. Michigan State plays Northwestern, Penn State and Michigan in three consecutive weeks in October. Multiple losses make a Big Ten title impossible, then the wheels fall off in November against Nebraska and Ohio State..

RELATED COVERAGE: Where does the Michigan State program rank this decade?

Spring cleaning: The 2018 season is about living up to expectations for Michigan State. The Big Ten headlines are dominated by Ohio State and Michigan, but the Spartans return 17 starters from a 10-win team. Michigan State lost co-defensive coordinator Harlon Barnett to Florida State, but Mike Tressel remains to keep the scheme the same for the Spartans. The only loss on the offensive side of the ball was Brian Allen, the all-conference center.

Experience in bunches: Michigan State returns its starting quarterback who threw for 2,793 yards and 20 touchdowns as a sophomore. It also returns its leading rusher and receiver, plus four starters along the offensive line. The defense returns nine starters. There isn’t a more experienced team in the Top 25 after overachieving with 10 wins in 2017. The only starter lost on offense was at center.

A 1-2 punch: Quarterback Brian Lewerke and running back LJ Scott form the best quarterback-running back tandem in the conference. The two combined for 13 rushing touchdowns and nearly 1,500 yards on the ground. With four starters returning along the line, those numbers should only grow. That dynamic opens up the passing game and gives Michigan State an identity in cold, bad-weather games late in the season.

Continuity in East Lansing: Consistency is underrated. More than half of Michigan State’s 17 losses over the past five seasons came in a nine-loss season in 2016. The Spartans registered another double-digit win season in 2017 despite a lack of experience. Not much will change for the Spartans. The formula has worked in the past and Michigan State hopes to ride that to a championship in a winnable Big Ten.

The key game: Nov. 10, Ohio State. The East Division in the Big Ten is loaded again and Michigan State is hoping to become champion. The Michigan game is always circled on the calendar, but the matchup against Ohio State might decide the champion in the East.

Want a hint? The last time Texas played this team, John Mackovic was the Longhorns’ coach and the game was played on New Year’s Day.