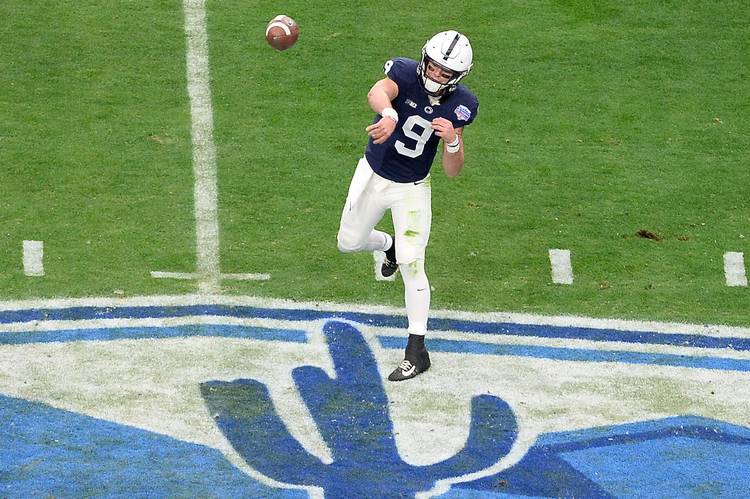 Quarterback Trace McSorley (9) of the Penn State Nittany Lions makes a pass against the Washington Huskies in the first half of the PlayStation Fiesta Bowl at University of Phoenix Stadium on December 30, 2017 in Glendale, Arizona. McSorley should end his college career this year with most of Penn State's career passing records. (Photo by Jennifer Stewart/Getty Images)

Their worst-case scenario: Without his top playmakers from a year ago, McSorley’s production drops down to pedestrian level and the youthful defense can’t consistently stop the Big Ten powers.

RELATED COVERAGE: Why Penn State’s offensive line will finally be a strength

Spring cleaning: Barkley, arguably the most explosive player in the nation last season, accounted for 2,329 all-purpose yardso. Finding his replacement was a top offseason priority, but the Nittany Lions also must answer plenty of other questions. How will promoted offensive assistant Ricky Rahne handle the coordinating and play-calling duties now that former OC Joe Moorhead is the new head coach at Mississippi State? Can anyone fill the cleats of all-American tight end Mike Gesicki? And can Penn State’s defense replace its top four tacklers from 2017?

All eyes on McSorley: McSorley enters the season with Heisman hopes and his spot in Penn State lore already secured. In two seasons as a starter, McSorley has a 22-5 record and holds a plethora of Nittany Lions passing records. Barring injury, he’ll end his collegiate career with virtually every passing record from a school that has produced its share of NFL signal callers.

Clearing the paths: While the Nittany Lion faithful are wringing their collective hands over the departure of Barkley, Franklin has expressed faith that four returning offensive linemen will help keep the ground game humming. Sophomore tailback Miles Sanders was a prep legend in Pittsburgh and averaged more than six yards a carry in limited time last season, and highly touted recruit Ricky Slade tallied more than 2,700 all-purpose yards and 40 touchdowns as an All-American prep player last season.

Getting defensive: Yes, the top four and six of the top eight tacklers are gone from a defensive unit gutted by graduation and several early departures. But no, Franklin isn’t too concerned about a dropoff because of a veteran front four that helped Penn State lead the Big Ten in sacks a year ago. Pass rushers Miller, Toney and Ryan Buchholz all return, which should make things easier on a rebuilt secondary.

The key game: Sept. 29, Ohio State. A win in the conference home opener could give the Nittany Lions an inside track on on the East division, especially with a schedule that includes other home games against conference heavyweights Michigan State and Wisconsin.

Well, it’s NOT a fourth straight Big Ten school. Oh, and John Heisman — the guy the trophy’s named for — once coached there.

The Dotted Line: Ranking Texas’ 13 commitments for the 2019 recruiting class