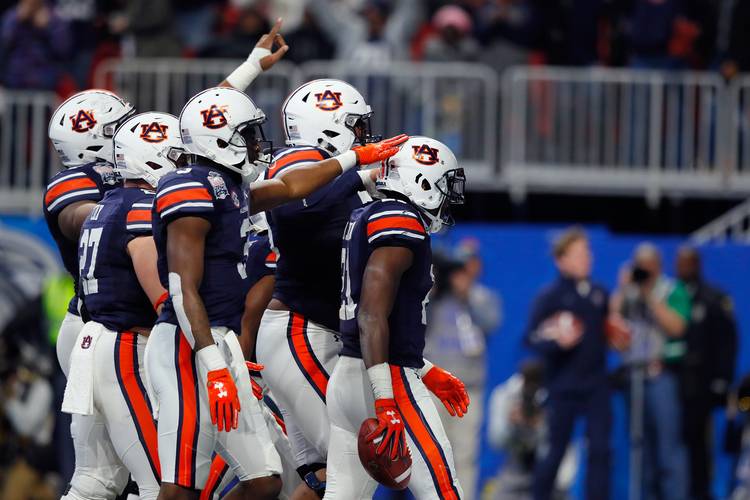 Kerryon Johnson (21) of the Auburn Tigers celebrates with teammates after scoring a touchdown in the third quarter against the UCF Knights during the Chick-fil-A Peach Bowl at Mercedes-Benz Stadium on January 1, 2018 in Atlanta, Georgia. Johnson is now a Detroit Lion, but the Tigers have produced back-to-back 1,000-yard rushers. (Photo by Kevin C. Cox/Getty Images)

The Tigers’ best-case scenario: The Tigers ride the momentum of beating Washington in season opener and survive road dates at Georgia and Alabama to earn spot in SEC title game.

Their worst-case scenario: Offensive line and secondary continues to have issues and Auburn’s tough schedule bites them a few times.

RELATED COVERAGE: ‘Close’ won’t cut it in 2018 for Auburn

Spring cleaning: Malzahn went with the familiar when he hired J.B. Grimes to be his new offensive line coach. Grimes had worked at Auburn from 2013-15 but left the program to coach at Cincinnati. He replaced Herb Hand, who left Auburn in the offseason to become the offensive line coach and co-offensive coordinator at Texas. … Quarterback Jarrett Stidham underwent shoulder surgery in January. He was limited in spring workouts but was cleared for summer… The Auburn board of regents approved a project to renovate the suites at Jordan Hare Stadium. … Preferred walk-on C.J. Harris made national news when he was ruled ineligible by the NCAA. Harris, a running back, uses cannabis oil as a treatment for seizures caused by his epilepsy.

Aggies’ loss, Tigers’ gain: Stidham, who is going into his second season as starting quarterback, explained at SEC media days that he really wanted to go to Texas A&M when he decided to transfer from Baylor in 2016 after Art Briles was fired. But he told reporters that Aggies coach Kevin Sumlin didn’t “recruit him too hard.” Stidham had been a five-star prospect when he signed out of high school. This summer, he got engaged to a Baylor soccer player. … Kam Martin, Auburn’s likely starter at tailback, also has deep ties to Baylor. He signed with the Bears in 2016 but was allowed out of his national letter of intent. Malzahn, while saying that Martin is atop the depth chart, says there are four to five more backs competing to fill the void left by Kerryon Johnson, last year’s SEC player of the year.

Lots of weapons: Malzahn is an offensive innovator, but he prefers running the ball over throwing it. But the strength of the Tigers offense this year is in its passing game. Every single receiver who finished last season with Auburn is back. Plus, the Tigers signed three 4-star prospects. But Auburn isn’t ready to ditch its running game; the Tigers have produced a 1,000-yard back nine straight seasons.

Driven by loss: Auburn enjoyed a terrific season in 2017, knocking off two teams that were ranked No. 1 on their way to an SEC West title. Then the Tigers dropped games to Georgia and Central Florida. Malzahn said it was the loss in the Peach Bowl — “we laid an egg that day” — that motivated his team in the offseason. Central Florida claimed the national title after beating Auburn and tweaked the Tigers again on Twitter this week.

This school has produced six Heisman Trophy winners and the last three have been quarterbacks.

The Dotted Line: Ranking Texas’ 13 commitments for the 2019 recruiting class