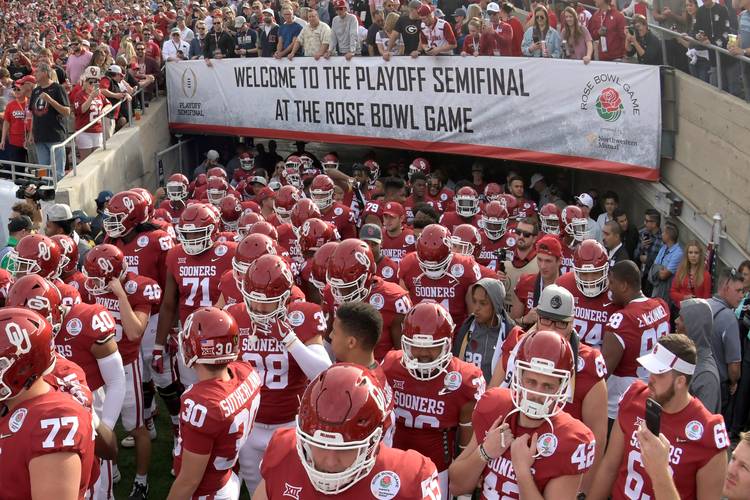 The Oklahoma Sooners are wait to run onto the field prior to the 2018 College Football Playoff Semifinal Game against the Georgia Bulldogs at the Rose Bowl Game presented by Northwestern Mutual at the Rose Bowl on January 1, 2018 in Pasadena, California. The Sooners, who have won three straight Big 12 championships, can become the first league team to win four in a row this season. (Photo by Harry How/Getty Images)

The Sooners’ best-case scenario: The Sooners are looking to become the first program to win four straight Big 12 titles. The only way that happens is if QB Kyler Murray takes the league by storm, turning Heisman winner Baker Mayfield into an afterthought. It’s going to take championship-level defense from the beginning, too.

Their worst-case scenario: OU’s deep running back room suffers injuries, leading to fits and starts with the running game. This is the only way Murray, or whoever starts at quarterback, can get protection. Rodney Anderson, Trey Sermon and Marcellias Sutton must lead the way or a season full of promise can turn mediocre quickly.

RELATED COVERAGE: Why Lincoln Riley has to play his QB situation close to the vest

Spring cleaning: For all the hyperventilating about Murray, he didn’t go through spring drills. Murray was toiling for the OU baseball team. Sophomore Austin Kendall got most of the gridiron work and might have the upper hand early in fall camp. “Austin is a great pocket passer, very, very smooth, he’s really good with his progressions,” Riley said. “He has really progressed in a lot of ways there and he’s a sneaky good athlete.”

Revamping the O-line: The Sooners have a ton of athleticism, to be sure, but not a lot of experience, something Riley harped on at Big 12 media days. “Should be an entertaining season,” he said. While quarterback will get a lot of attention, don’t overlook the rebuilt offensive line. Losing center Erik Wren may have been just as important as losing Brown, perhaps the best left tackle in the country.

Ready for an encore season: LB Kenneth Murray started 14 games last season as a freshman. That’s an incredible workload for a young player at a high-profile school like OU. The freshman All-American is ready for more. “We’re hungry,” Murray said at Big 12 media days. “That’s one word to describe our defense. That’s our mentality.” OU had the third-best passing defense last season and was fifth in scoring defense (27.1).

Getting defensive: During the boring summer months, it’s easy for a story to spin out of control. That’s what happened when Riley casually suggested that Georgia wouldn’t have a top-five defense in the Big 12. “My comment had nothing to do about Georgia specifically and everything to do with the Big 12 and the quality of offenses in this league,” Riley clarified at Big 12 media days. He’s right; Georgia likely wouldn’t have a top-five defense in a league where six teams averaged more than 30 points per game last season.

Note: Oklahoma-Texas is at the Cotton Bowl in Dallas; Oklahoma beat TCU again in the Big 12 championship game, 41-17

The key game: Oct. 6, Texas. It’s possible the Sooners show up in Dallas with a 5-0 record. They’ll be looking to ruin whatever momentum the Longhorns have at that point. Perhaps the two will meet again in the Big 12 title game in December.

This school’s head coach was once Bobby Bowden’s offensive coordinator at Florida State.