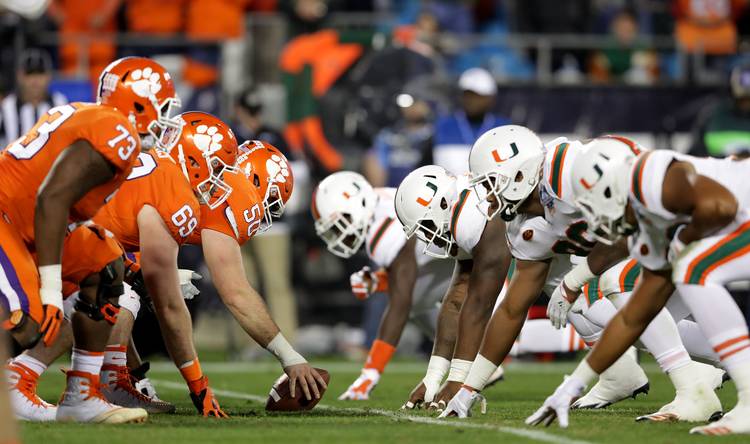 The Clemson Tigers offense lines up against the Miami Hurricanes defense in the second quarter during the ACC Football Championship at Bank of America Stadium on December 2, 2017 in Charlotte, North Carolina. (Photo by Streeter Lecka/Getty Images)

The Hurricanes’ best-case scenario: Miami started its second season under Mark Richt with a 10-0 record. The Hurricanes were on track to win the ACC and earn a berth in the College Football Playoffs before an 1-3 finish to the year. An experienced Miami squad can push Clemson for the title in 2018.

Their worst-case scenario: The expectations are back for Miami, and so is the swagger. There is always a worry that the wheels fall off for the Hurricanes if adversity is faced early in the season, especially after that 10-0 start in 2017. Struggles in 2018 would prove Clemson is in a class of its own in the ACC.

RELATED COVERAGE: After ending one streak against Florida State, Miami out to snap another

Spring cleaning: It was a quiet spring outside of the normal losses to attrition and graduation. Miami must replace running back Mark Walton and its two top receivers. The momentum built the last two years by Richt allowed for an influx of talent on the recruiting trail. Miami spent the spring watching the young pups battle the experienced upperclassmen for spots on the two-deep. Miami returned 15 of its 22 starters, including a productive quarterback and a fantastic trio of linebackers.

Goal to go — repeat the strong start: Miami captured the nation’s attention with the 10-0 start. The Turnover Chain made its debut and the swag created by Miami in the 1990s returned. The Hurricanes begin 2018 with a neutral-site contest with LSU in Arlington. A win there propels Miami back into national championship contention. A loss to a weakened LSU program means Miami must run the table to contend for a spot in college football’s final four.

Is the Clemson gap closed?: The talent gap between Clemson and the rest of the ACC was apparent for years after Jameis Winston left Florida State. Clemson is the clear power in the ACC and the favorites to win another title in 2018. Miami, with experience and a successful 2017 season, are ready to be in the conversation but the Hurricanes could be a recruiting class away from matching up with Clemson on the field.

Finish, finish, finish: Miami sprung a leak down the stretch, limping to the finish with an 1-3 record over its last four games. It started with an upset loss to Pittsburgh, which snowballed into an ACC title game loss to Clemson in blowout fashion, and a bowl loss to Wisconsin. The Hurricanes must prove capable of running the entire race before displacing Clemson.

Note: Miami-LSU will be played at AT&T Stadium in Arlington

The key game: Florida State, Oct. 6. Miami begins with a neutral-site contest against LSU, but that has no bearing on the ACC race in the Coastal Division. An in-state battle between Miami and Florida State likely decides which team faces Clemson for the ACC title. The winner of that game becomes a legitimate option for the College Football Playoffs.

Coming tomorrow: Our No. 6 team

Bo Callahan, the fictional star quarterback from the Kevin Costner movie “Draft Day,” won his Heisman Trophy at this school.