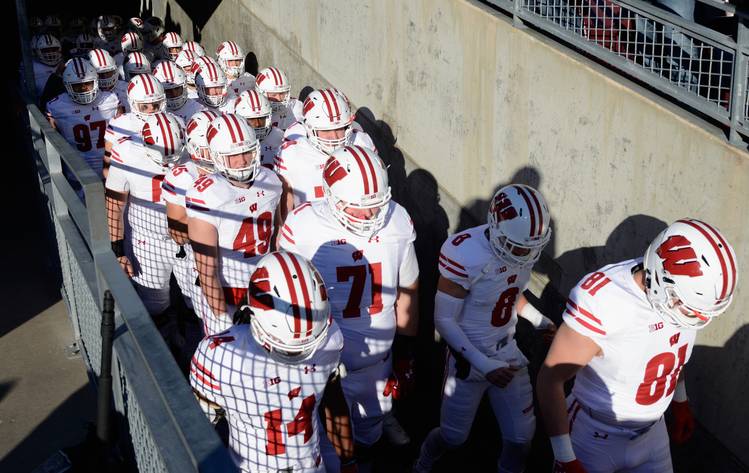 The Wisconsin Badgers walk onto the field before the game against the Minnesota Golden Gophers of the game on November 25, 2017 at TCF Bank Stadium in Minneapolis, Minnesota. (Photo by Hannah Foslien/Getty Images)

The Badgers’ best-case scenario: Junior quarterback Alex Hornibrook, who threw for 2,607 yards and 25 touchdowns in 2017, cuts back on his 15 interceptions from a year ago, and a dynamic and balanced offense propels the Badgers to a Big Ten Conference title and their first appearance in the College Football Playoff.

Their worst-case scenario: An inexperienced defense can’t match last season’s success, when it allowed a conference-low 262 yards and 13.9 points per contest. Those defensive lapses will cost the Badgers either during a difficult road slate or the Big Ten title game.

RELATED COVERAGE: Unfazed by changes, Badgers think 2018 can be a championship season

Spring cleaning: Graduation sapped both quantity and quality from the Big Ten’s best defense in 2017. The Badgers welcome back just three starters, and don’t overlook the departure of linebackers coach Tim Tibesar, who mentored an assembly line of future NFL linebackers such as Joe Schobert, T.J. Watt and Vince Biege. Offensively, replacing all-conference tight end Troy Fumagalli looks like the top — and darn near only — priority.

Stalwart OL returns all 5 starters: It’s hard to improve offensively after averaging 33.8 points and 415 yards per contest in 2017, but expect even better things from this pack of Badgers. The offensive line — always a stalwart of the Wisconsin program — returns all five starters as well as running back Jonathan Taylor, who set the single-season freshman FBS rushing record with 1,977 yards and 13 touchdowns last season. Oh, and quarterback Hornibrook welcomes back his top four receivers.

Late road woes for Badgers? The biggest obstacle between the Badgers and the CFP may just be a brutal conference schedule that includes trips to the Big House at Michigan as well as that November visit to Penn State. Win those games, and nemesis Ohio State may be waiting in the Big Ten title game.

Chap could be ready to pound Wisky foes: Nakia Watson, who signed with the Badgers after running for 1,938 yards and 27 touchdowns as a senior at Westlake last year, may redshirt considering the depth Wisconsin has at running back. However, Badgers running backs coach John Settle said earlier this year that the 6-foot, 230-pound Watson has the body type to endure a Big Ten season and compete immediately.

Points allowed: 3rd (13.9 ppg) — sandwiched near the top of the country between two ACC schools, right above No. 4 Virginia Tech, right behind No. 2 Clemson

The key game: at Penn State, Nov. 10. Expect foul weather, high stakes and more than 100,000 full-throated fans in this brutal, late-season road trip for the Badgers.

This school’s coach was the first two-time winner of the Paul “Bear” Bryant Award — but not at his current school.

The Dotted Line: Trio of 2019 targets, one out-of-state commitment expected on campus Friday