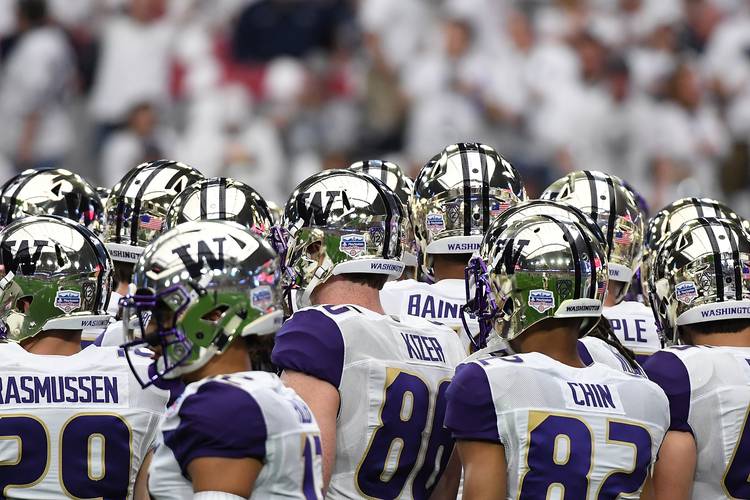 The Washington Huskies prepare for a game against the Penn State Nittany Lions during the Playstation Fiesta Bowl at University of Phoenix Stadium on December 30, 2017 in Glendale, Arizona. (Photo by Norm Hall/Getty Images)

The Huskies’ best-case scenario: Anything but a return to the CFP will be a disappointment.

Their worst-case scenario: The Huskies have a hiccup like they did last year in Pac-12 play — a 14-7 loss to Arizona State — and fail to make the conference championship game.

RELATED COVERAGE: Ten things to know about the Washington Huskies

Spring cleaning: Everyone outside the state of Washington has heard the names of Huskies stars Jake Browning (QB) and Myles Gaskin (RB). However, cornerback Elijah Molden took home the “Best Hands” trophy for spring practice. The 5-10, 191-pound sophomore was one of the most improved players this spring and likely earned a spot in new defensive coordinator Jimmy Lake’s nickel package. … Speaking of Lake, UW made him the highest paid assistant in the program’s history in May when it gave him a three-year extension worth $1.1 million annually.

(Psst. They play defense, too): Washington’s defense in 2017 was a bit unappreciated. It happens. Especially when the offense was the second-highest scoring unit in the Pac-12 and 17th in the nation (36.2 points per game) and has two possible Heisman candidates in Browning and Gaskin. However, the defense finished fifth nationally in points allowed —16.1 per game. The rest of the Pac-12 should be on notice as nine starters return from that defense.

Lots of weapons: Washington’s backfield may be one of the best in the nation. Browning returns for his senior season as does Gaskin, who has 4,055 career rushing yards. Browning threw for 2,719 yards and 19 touchdowns while Gaskin amassed 1,380 yards and averaged 6.2 yards per carry. Browning lost his favorite target — the graduated Dante Pettis. Look for the deep threat Chico McClatcher and tight end Hunter Bryant to get a lot of looks from the pass-happy Huskies.

Scheduling issues: Washington’s schedule was a bit soft in 2017 with non-conference games against Big Ten cupcake Rugters, FCS powerhouse Montana and the Mountain West’s Fresno State. All were at home. That won’t be the case this year. The Huskies will charge out of the gate against Auburn in the heart of SEC country — Atlanta. The game will likely set the tone for Washington’s hopes of making the College Football Playoff. Other non-conference games include FCS juggernaut North Dakota and BYU. The conference schedule is equally concerning with away games at UCLA, Utah and Washington State.

Coming tomorrow: Our No. 4 team

This school’s coach has coached under Nick Saban three times — twice in college, once in the NFL.

The Dotted Line: Trio of 2019 targets, one out-of-state commitment expected on campus Friday

The Dotted Line: Young prospects expected to converge on Texas for camp on Friday