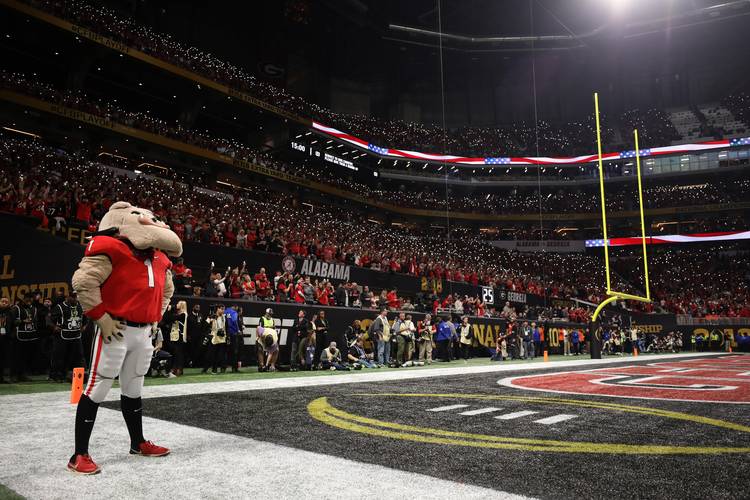 Hairy Dawg, the Georgia Bulldogs mascot, reacts to the start of the fourth quarter against the Alabama Crimson Tide in the CFP National Championship presented by AT&T at Mercedes-Benz Stadium on January 8, 2018 in Atlanta, Georgia. (Photo by Christian Petersen/Getty Images)

The Bulldogs’ best-case scenario: The defending SEC champs get over the Tua Tagovailoa hangover and remain a title contender after blowing a 13-point second-half lead in the national championship loss to Alabama.

Their worst-case scenario: The Bulldogs don’t figure out a way to get run production with the loss of Sony Michel and Nick Chubb, putting too much pressure on sophomore quarterback Jake Fromm to carry the offensive load.

RELATED COVERAGE: Quarterback controversy? History is on Georgia’s side

RELATED COVERAGE: Alabama’s not ready to call Georgia a rival — yet

Next in line: Michel and Chubb got the most headlines but D’Andre Swift quietly averaged a team best 7.6 yards per carry. Swfit and Elijah Holyfield — the son of boxing legend Evander Holyfield — will have a chance to prove they are the real deal against some of the toughest run defenses in the country.

An increased workload: Fromm exceeded expectations as a freshman starter but with those experienced runners leaving, the playmaking responsibilities will increase. His 160.1 passing efficiency rating was the ninth best in the country and the second in the SEC behind Missouri’s Drew Lock. It will be interesting to see if he is better in the vertical game than he was a freshman.

A Roquan-less defense: Butkus Award winner Roquan Smith has left a huge void at linebacker. Also, the entire starting linebacking corps from the postseason left along with three members of the secondary. Smart is hoping that Tae Crowder, who made that big play on Oklahoma’s squib kick in the Rose Bowl, will step up on the inside. Redshirt junior safety J.R. Reed announced before the national championship game he would be back along with ball-hawking cornerback Deandre Baker. It may take some time for the unit to gel but the first half of the schedule is pretty friendly aside from the South Carolina game.

Note: Georgia went on to beat Auburn in the SEC championship game, 28-7

The key game: At South Carolina, Sept. 8. The second weekend of the season provides a stiff road test. If recent history means anything, the Dawgs should be confident despite the massive loss of talent. Kirby Smart is 2-0 against South Carolina coach Will Muschamp, his former teammate at Georgia.

This school’s head coach was drafted in the 13th round of the 1982 MLB draft as a shortstop, but instead played college football as a defensive back for the Cincinnati Bearcats.

The Dotted Line: Young prospects expected to converge on Texas for camp on Friday

The next Poona Ford? Texas just needs Chris Nelson to be ‘steady’ on its defensive line