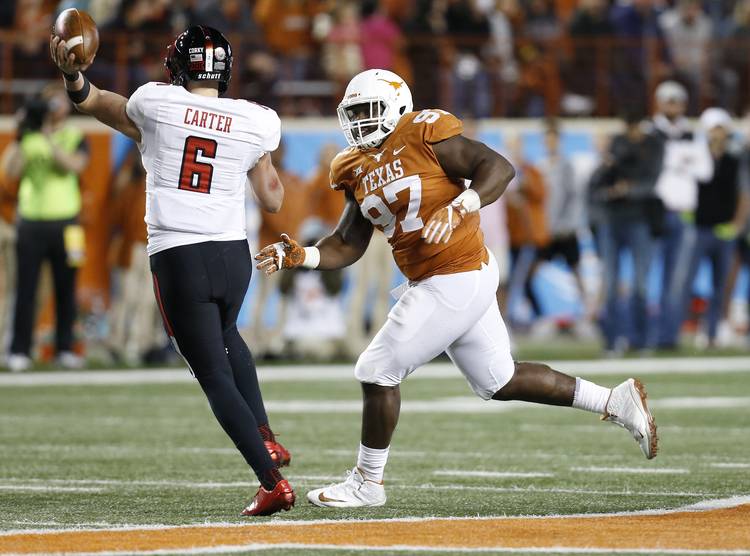 This week, Poona Ford will take the next step in his football career as the Seattle Seahawks’ training camp gets underway in Renton, Wash.

The absence of Ford, who entered the NFL this spring as an undrafted free agent, leaves a 305-pound hole in the middle of Texas’ defensive line. Ford is the reigning defensive lineman of the year in the Big 12. Used last year as a nose tackle, he compiled eight of his 34 tackles behind the line of scrimmage.

“Poon’s gone but I’m the next guy. I’m going to hold the fort down,” senior Chris Nelson said at last week’s Big 12 media days. “It’s meant for me, I’ve been built for this.”

Texas coach Tom Herman has cautioned about comparing Nelson to Ford. Herman places Ford in the triumvirate of the “great nose tackles in my life,” alongside Houston standout Ed Oliver and ex-Longhorn Casey Hampton. Herman also assesses the 6-1, 315-pound Nelson and the stocky-yet-long-armed Ford have different skills.

Addressing reporters at Big 12 media days, Herman floated the idea of replacing Ford with a committee of linemen. What does that entail for Nelson? Said Herman: “He doesn’t need to be Poona Ford. He’s got to play within the scheme. He’s got to lead that front because he’s got some characters up there. He’s got to produce, certainly, but we just need him to be steady.”

Ford and Nelson are close friends. In fact, Ford was crashing at Nelson’s place in Austin while Nelson addressed Big 12 media members on July 17. Nelson joked “our d-line coaches get us mixed up in the film room.” Both players have been described as quiet leaders, although Nelson seems bombastic by comparison. Ford did not respond to a request for comment for this story.

Originally Louisville commits, Ford and Nelson followed Charlie Strong to Texas in 2014. A Florida native, Nelson flirted with Central Florida and South Florida after his Louisville de-commitment before deciding the distance between Austin and his hometown of Lakeland would do him good. Former Texas defensive coordinator Vance Bedford once claimed that a coin flip decided that Nelson would redshirt instead of Ford in 2014, although Nelson now says a banged-up shoulder should be an addendum to Bedford’s story.

Nelson started eight times as a nose tackle in 2016 before sliding over to defensive end last season. In his career, he has accumulated 70 tackles and 3.5 sacks. The Big 12 named Nelson its defensive player of the week after he opened his sophomore season with eight tackles in a 50-47 home win over Notre Dame.

Nelson’s junior year ended when he injured his elbow in the lead-up to the Texas Bowl. That injury kept him from participating in contact drills this spring, but Nelson says he is fully healed from his arthroscopic surgery. He’ll return to action alongside a veteran defensive line that also features Charles Omenihu, Malcolm Roach and Breckyn Hager, a member of the Big 12’s preseason team.

“He’s going to be a great anchor for us in the middle,” said tight end Andrew Beck, who is another Florida transplant and 2014 signee. “I think he knows that’s his job, he’s accepted it and he’s excited for the opportunity.”

#ThisIsTexas#UTDLine
Congratulations to @chrisnelson2455
Welcome to the 'T' Ring fraternity….. one of the proudest moments for me as a coach is to see former players get that degree…. pic.twitter.com/fMprDB7DD3

In May, Nelson graduated with a degree in applied learning and development. He also earned a minor in social work. With that degree came online speculation that he’d finish his career elsewhere as a graduate transfer. Nelson, though, insists he never thought about leaving Texas.

“I just feel like I didn’t do enough, honestly,” Nelson said. “My pride with my teammates, I love these guys, so I feel like I needed to come back and play another year. I feel like this is going to be a great year, and I can be that leader that guys look up to for success.”

The Dotted Line: Texas’ top targets in the 2020 class at each offensive position