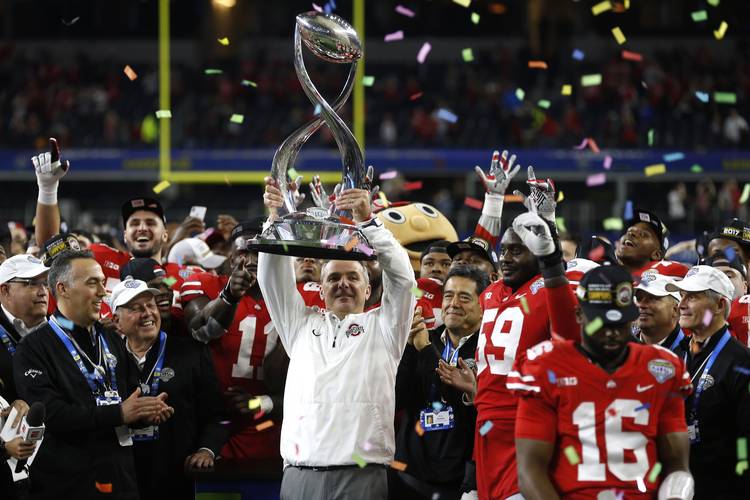 The Buckeyes’ best-case scenario: Dwayne Haskins, who came off the bench to rescue the Buckeyes against Michigan, proves that was a good launching point to replacing four-year starter J.T. Barrett at quarterback. Haskins has completed 70.2 percent of his passes. But he’s only thrown 57 of them. Haskins’ supporting cast will be among the best in the country..

Their worst-case scenario: A promising but inexperienced defense, wiped out at linebacker and searching for new playmakers in the secondary, can’t deal with the inevitable growing pains. September trips to Arlington (TCU) and State College (Penn State) mean the young ones will be on steep learning curves.

RELATED COVERAGE: Ohio State vs. Penn State, the game that will shape the season

Spring cleaning: QB Joe Burrow performed well but didn’t like his chances of winning the starting job from Dwayne Haskins, or possibly even redshirt freshman Tate Martell, so he transferred to LSU, where he has a better shot. … A string of domestic-abuse incidents prompted Meyer this week to fire receivers coach and recruiting coordinator Zach Smith. Meyer hadn’t named a replacement as of Wednesday.

Top of the class: The Buckeyes don’t rebuild. They reload. Ten starters and seven NFL draft picks depart from the 2017 team, but a recruiting-intensive analysis shows this could be the most talented OSU team of all. The roster’s average player rating by 247Sports is 93.18, the highest number since the grades have been given out. Overall, the last five Buckeyes’ classes have been No. 2, 2, 4, 7 and 3. Only Alabama can top that.

Texas pipeline: Urban Meyer has raided Texas for blue-chip recruits in recent years, and several of those will get a chance to show off in the state Sept. 15 against TCU in Arlington. RB J.K. Dobbins (La Grange) is coming off a sensational freshman season. CB Kendall Sheffield (Missouri City) and RG Demetrius Knox (Fort Worth All Saints Episcopal) are starters. CB Jeffrey Okudah (South Grand Prairie) and LB Baron Browning (Kennedale), a pair of former five-star recruits, are candidates to start.

LT QB excites Meyer: Let’s not forget the youngest Texan on the roster: Freshman QB Matthew Baldwin of Lake Travis. He is a redshirt candidate, working his way back from a torn ACL in the Cavaliers’ state semifinal playoff game, but the coaching staff raves about his potential. “He’s doing great,” Meyer said. “He’s up to 210 pounds (from 190). The receivers love him. What he did at Lake Travis was phenomenal. He stuck around and when he finally got his chance he delivered. I am very excited about him.”

New signal caller up in the air: Speaking of Texans, J.T. Barrett (Wichita Falls Rider) won’t be easy to replace. Often underappreciated because he wasn’t a pure passer, Barrett broke Westlake ex Drew Brees’ Big Ten record for career yards with 12,697 while rolling up a 38-6 record. Dwayne Haskins, a better pure passer but less of a runner, lacks the vocal leadership style of Barrett. Urban Meyer said ex-Texas A&M commit Tate Martell carries a certain swagger to his game and hasn’t ruled him out as the starter.

Note: Ohio State-TCU will be played at AT&T Stadium in Arlington

The key game: Nov. 10 at Michigan State. It could easily be Sept. 29 at Penn State, but the Buckeyes might be able to survive one loss. They can’t afford to lose both. The Spartans return 19 starters and 92 percent of their offensive and defensive production, according to Bleacher Report, the highest number in the FBS.

This school plays Jimbo Fisher’s current and former team this season, both on the road.

The Dotted Line: Texas’ top targets in the 2020 class at each offensive position