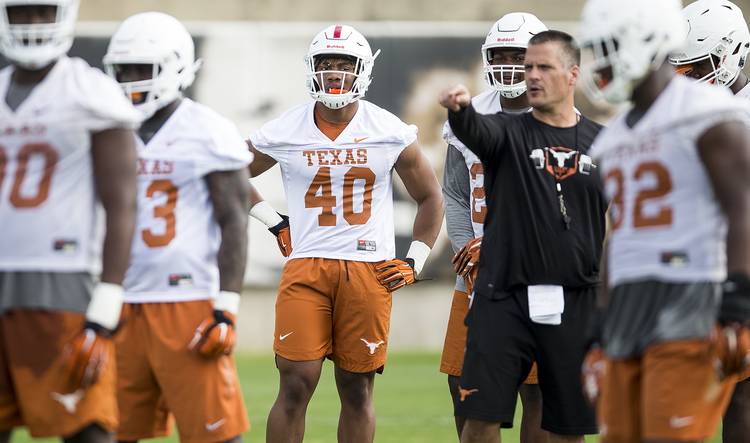 This fall, Texas’ football team will work with a deeper depth chart.

The NCAA is entering its first football season with its new redshirt rule. The rule allows redshirt candidates — most commonly, freshmen — to play in four games without that counting as a year of eligibility. Previously, a player burned his redshirt season once he appeared in one game.

The NCAA’s revised rule for redshirts, which was approved this June in Indianapolis, applies only to Division I football players.

Last year, Texas coach Tom Herman redshirted six players in his 17-member recruiting class. (Senior tight end Andrew Beck also sat out after injuring his foot in the preseason). This fall, all 26 of UT’s incoming recruits could see the field.

“It’s going to be a big chess match,” Herman said at the Big 12 media days. “I don’t think anybody’s got the blueprint just yet. There’s going to be a lot of mixing and matching.”

What are the benefits of this new rule? Conceivably, teams could play a match-up roulette. Freshmen can earn game-time experience in bowl games or preserve their eligibility if they’re unable to win an early-season position battle. Coaches will have to develop a better understanding of their entire roster, not just the players who are expected to play on Saturdays.

Most importantly, though, the redshirt rule will help with a team’s depth.

Earlier this month, Baylor coach Matt Rhule noted “as we’re replenishing the roster we have to take tremendous advantage of it.” Rhule surmised the Bears could have benefited from this rule during last year’s injury-plagued season. Baylor senior Chris Platt also chimed in on injuries, recalling that he almost lost his redshirt season in 2014 as wounds piled up in the receiving corps.

“I feel like it would have helped a lot (from) an experience standpoint,” said Platt, who has averaged 18.6 yards per catch in his career. “Being able to use a receiver for those type of moments, early in the season or along the stretch when somebody is hurt, is very important so somebody’s whole year isn’t used just for a couple plays.”

Beck’s name came to mind as Herman illustrated the benefit of temporarily plugging a redshirt candidate into the depth chart. Beck fractured his left foot in August but was medically cleared by the end of the season. Texas, though, chose to keep Beck sidelined so he could maintain his final year of eligibility.

Had this redshirt rule been in place, both Beck and freshman Reese Leitao could have played in the Texas Bowl. Kendall Moore, a graduate transfer who caught three footballs last year, was instead the team’s only available tight end for its 33-16 win over Missouri. Injuries had ended the seasons of Cade Brewer and Garrett Gray. Chris Warren III, who opened the year as a running back, left the team after the regular season.

“When you’ve got seniors that are leaving, you can float them in a game and get a feel of how your team is going to be the next year,” said Nelson, a senior who redshirted during the 2014 season. “Getting their feet wet, I feel it’s good for them.”

How this redshirt rule impacts Texas’ incoming recruits has yet to be seen. Herman doesn’t like to sit skill players anyways since “if you’re redshirting skill guys, you probably made recruiting mistakes.”

Ideally, said Herman, Texas would like to save its redshirts’ playing time for the end of the season when depth becomes depleted. That list of redshirts could include quarterbacks Casey Thompson and Cameron Rising and a quartet of freshmen offensive linemen.

Not everyone in the Big 12 has a preliminary plan, though.

“We don’t have a clue what we’re going to do with the new redshirt rule,” Oklahoma State coach Mike Gundy said. “We will have to get together in August and see how it plays out.”

The redshirt rule has been a topic of conversation at media days across the country this summer.

Mark Dantonio, who has been Michigan State’s head coach since 2007, suggested these regulations for redshirts will encourage sidelined freshmen to remain motivated. SMU coach Sonny Dykes pointed out the safety benefits for non-redshirting players, who may no longer be asked to do more than one job if a teammate gets injured. San Diego State coach Rocky Long suggested the NCAA should eliminate redshirts and just give players five years of eligibility.

“I don’t know if people on the outside or even maybe us on the inside understand how different that rule is. How much the game is going to be different, the strategy behind it,” Oklahoma coach Lincoln Riley said. “I think it’s going to be fun. I think it’s a good rule.”

Our 10th annual Top 25 countdown: No. 2 Clemson’s D-line could be best ever in NCAA history