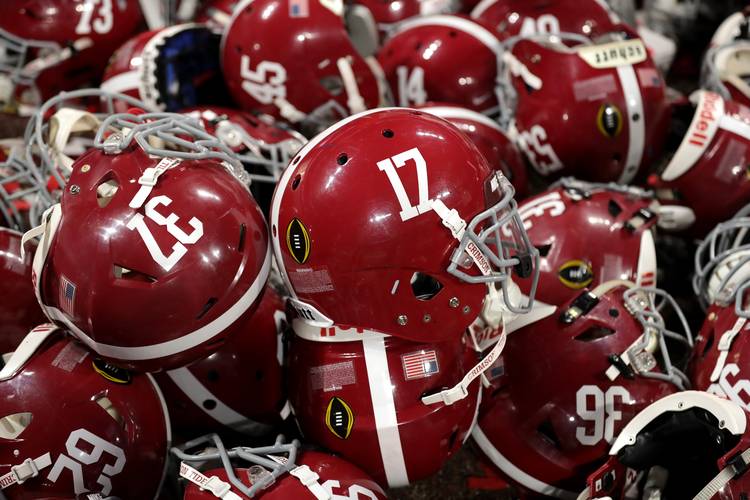 A detailed view of Alabama Crimson Tide helmets in a pile during the celebration after the CFP National Championship at Mercedes-Benz Stadium on January 8, 2018 in Atlanta, Georgia. Alabama won 26-23. (Photo by Streeter Lecka/Getty Images)

Sure, it’s July. But it’s never too early to talk college football. Here’s your daily fix — the final installment of our annual countdown of the preseason Top 25, as selected by the American-Statesman sports staff. Last year’s eventual CFP semifinalists were ranked Nos. 1, 5, 8 and 14 on our 2017 list.

No. 3: Can Texas pipeline spur No. 3 Ohio State to title?

No. 2: Clemson’s D-line could be best ever in NCAA history

The Crimson Tide’s best-case scenario: Can the season end anywhere else but Santa Clara, Calif.? It’s not enough that the Crimson Tide have won a staggering five national titles in the last nine years. Six, anyone? They’ll start the season at No. 1 again with probably the best front seven in the land and figure a better than 70 percent chance of reaching the title game if Nick Saban can replenish a depleted secondary and prevent quarterback fissures from disrupting the locker room.

Their worst-case scenario: It can be a recipe for disaster when a veteran quarterback who was the SEC player of the year as a freshman gets benched in the championship game and his young backup scores the comeback victory. While Jalen Hurts isn’t the type to cause dissension if Tua Tagovailoa wins the starting job as expected, the move could risk bad karma. Heck, if Alabama can’t adequately replace departed wideout Calvin Ridley or 10 other starters, the Tide might even face disaster, like a No. 4 CFP seeding like last year.

RELATED COVERAGE: When it comes to Saban and friends, the SEC ignores the numbers

Inside the Crimson Tide

Spring cleaning: The NFL draft annually takes a blow torch to Alabama’s roster, this time removing an even dozen. … Watch out for incoming nose tackle Tevita Musika, a junior-college transfer. … Did you know the Tide had 53 sacks last season? … Alabama will be without both kickers in Ray Guy finalist JK Scott and Andy Pappanastos; Joseph Bulovas, who redshirted last year but booted five field goals in the spring game, is the most likely kicker while freshman Skyler DeLong arrives as one of the top high school punters in the country. … The Tide is loaded with great running backs from 1,000-yard rusher Damien Harris to the physical Najee Harris, shifty Josh Jacobs and total package Brian Robinson. … The best defender may be lineman Raekwon Davis; linebacker Terrell Lewis, who had the key sack in overtime versus Georgia, may have become the most disruptive force on the defense but suffered a serious injury this summer.

There’s a catch: Calvin Ridley is gone and with him 63 catches, and the next busiest wideout on Alabama’s team was the gifted Jerry Jeudy, who had just 14 receptions for 264 yards. That could be the biggest trouble spot — relatively speaking — for Saban, who waved goodbye to two other receivers and the pass-catching Bo Scarbrough and his 17 grabs. DeVonta Smith had the 41-yard, game-winning catch in overtime in the championship game, and tight ends Hale Hentges and Irv Smith Jr. are more than adequate.

Hurts or Tua? Tua or Hurts?: How do you not start Tagovailoa after his late-game heroics in which he burned Georgia on a second-and-26 touchdown pass in overtime? The guy’s got charisma and a presence. Never mind that Tagovailoa hurt his thumb in spring ball and that Hurts has started back-to-back championship games and has won a title. Who knows, maybe he becomes the next Braxton Miller and moves to wide receiver or tight end. Oh, and Tua’s younger brother, Taulia, is a quarterback and one of 17 Tide pledges.

Starting over on D: The secondary completely vanished as Minkah Fitzpatrick and Co. have moved on, but opponents can’t relax because there may be very little talent dropoff. Deionte Thompson could assume Fitzpatrick’s leadership role and start at strong safety although five-star freshman Patrick Surtain Jr. could press him for that spot as the next Minkah. Thompson started the CFP games because of an injury. Also look out for Saivion Smith, a former LSU player, to emerge.

Note: Alabama-Louisville will be played in Orlando.

The key game: Nov. 24, Auburn. Alabama fell in the Iron Bowl last season to the Tigers, who also knocked off Georgia in the regular season, and still made the Final Four. Doing so again might tempt fate. Missouri’s a trap game.