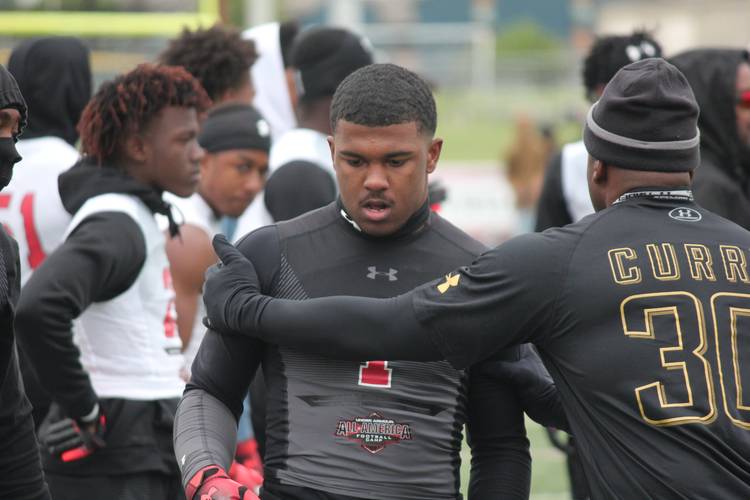 Only 12 of the 55 members of the 2019 Fabulous 55 remain uncommitted as August begins. The early signing period and the ability of juniors to now take official visits before the start of their senior seasons has sped up an already hectic recruiting schedule. Fewer recruits are waiting until their senior year, much less national signing day, to pick a school.

Here are the predictions for the remaining 12 uncommitted prospects on our list, including several Texas targets.

Stripling is a three-down defensive end who has transformed his body since his junior season, adding muscle and losing some of his natural weight. He’s become a monster in the trenches, dominating at The Opening Final in Frisco in early July. Stripling is the top-rated uncommitted prospect in the state and Texas A&M is the team to beat. He lacks the ideal length at 6-2.5, but he’s an explosive, strong player who does a great job winning the hand battle at the line of scrimmage.

Catalon isn’t just a football recruit. He plans on continuing his baseball and football career in college and Texas is hoping the center fielder and safety takes his talents to Austin. He was on campus Tuesday for an unofficial visit and remains extremely close to assistant coach Craig Naivar, who also is a big baseball fan. Catalon has the blessing of Tom Herman and David Pearce to play both sports at Texas. On the football field, Catalon stars on offense and defense for Legacy. He’ll play boundary safety or nickel back in college.

Texas holds commitments from three receivers. Four is the magic number. The top target remaining at the position is Wright, a freakish athlete with a 6-4 frame and plenty of speed. He’s only played receiver for one season, earning first-team all-district honors as a junior. All three of the current commitments project towards the slot receiver position because of a lack of height. Wright is a true outside receiver with a ton of potential.

Curry set a prep record with 21 receptions in a single game as a junior. His quarterback, Grant Gunnell, was a one-time Texas A&M commit who is now following Kevin Sumlin to Arizona. The Wildcats will remain in play for Curry as he and Gunnell hope to set more passing records as seniors. Curry also drew major interest from SEC programs and the safe bet is that the big-bodied receiver stays in the southeast. Auburn is the current leader.

Higgins is playing his recruitment close to the vest. There was a time when it was assumed the 6-3 receiver would stay home and pick Texas early. As the recruiting cycle continued, it became clear that Higgins, a native of Florida, wouldn’t mind leaving the state. Stanford was once the favorite, then Florida and now Ohio State. There is turmoil on the coaching staff at Ohio State right now, which may help the other teams on his finalists list. Texas will remain in the picture until national signing day even if he commits to another school.

Cine is a move-in from Massachusetts. He holds an offer from the Longhorns and was on campus multiple times during the offseason. A recent unofficial visit to Georgia moved the Bulldogs to the top of his list. His roots up north put Big Ten powers in play like Michigan and Penn State.

Brown plays wide receiver and cornerback at Newton. He’s likely to remain on the offensive side of the ball in college because of his dynamism with the ball in his hands. TCU was one of the first teams to recruit him, but teams like Oregon and Texas A&M put in offers this spring and remain among his top schools.

Gbenda is the only in-state inside linebacker with a UT offer. He’s not the traditional middle who relies on pure size and power. He’s a speedy sideline-to-sideline Mike linebacker who closes on ball carriers and is comfortable playing in space against the pass. Texas is a top school for Gbenda. TCU and Texas A&M are clearly in the mix and this one isn’t a sure thing, especially if Texas gains a commitment from out-of-state inside linebacker Maninoa Tufono.

Glass, like Gbenda, has held a Texas offer for a long time but it isn’t exactly clear where he stacks up on the recruiting totem pole for the coaching staff. Glass is the only in-state running back in the 2019 class to hold an offer from the Longhorns, but Texas is heavily recruiting fellow running backs Noah Cain and Trey Sanders. The Longhorns have signed a Katy product in two of the last three classes and Glass is close to current Texas running back Kyle Porter.

Very blessed to be in the position. Top 6 no particular order pic.twitter.com/ebHFzHKuTY

McGill is a productive safety with a nose for the football. He outplays his smaller stature with a hard-nosed approach. He’s recorded 211 tackles over the past three years, while also helping on offense as a running back and wide receiver. He’ll play safety in college. He recorded seven interceptions as a sophomore. His numbers went down as a junior as teams avoided his side of the field.

Barlow’s stock grew exponentially during a junior season that ended with a state championship for Newton. Barlow is a durable running back who can run between the tackles, attack the edge and catch out of the backfield. He’s a player the Longhorns could offer if guys like Cain, Sanders and Glass go elsewhere, or if Texas decides to take a second running back late in the cycle.

Ugwoegbu is a big, long defensive end with a ton of upside at the position. He holds 21 offers and the Aggies are considered the leader heading into the season. Ugwoegbu was a second-team all-district selection as a junior at both tight end and defensive end. He’s expected to be a full-time defensive end at the college level.