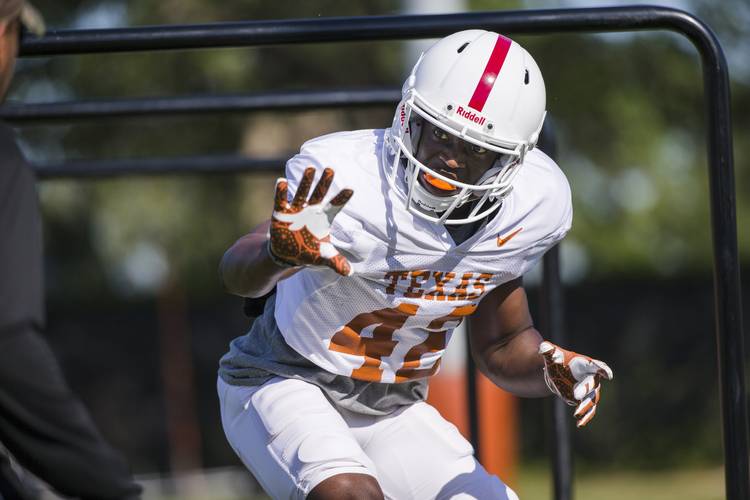 The 2018 season, by the way, doesn’t kick off for another four weeks.

Texas opened its fall camp Friday, and many of the Longhorns arrived at Denius Field with a swole swagger. UT recently completed its second offseason with strength and conditioning coach Yancy McKnight. The results in the weight room have led to a feeling of confidence.

Said senior linebacker Anthony Wheeler: “Everybody (is) working really hard in that weight room; I think everybody can contribute to this team somehow.”

Twice this year — once as Texas prepared for its spring practices and again at Big 12 media days — Herman has opened a press conference by talking about the weight room. In March, he praised the offseason strides made by members of his 2017 recruiting class. This summer, Herman called McKnight the “best strength coach in college football.” One of the team’s two offseason themes, the coach said, was to “develop.”

In March, Herman reported that 46 Longhorns could do a vertical jump of over 30 inches. Thirty-three players had a back squat of over 500 pounds. The power clean? Forty Longhorns were doing at least 300 pounds.

A picture, though, is worth a thousand words, and a video has even more value. On July 27, sophomore linebacker Marqez Bimage tweeted a video of himself recording a 700-pound squat. The 42-second clip, which featured teammates Chris Brown and Kris Boyd climbing atop the weight machines to shout their encouragement because, as senior defensive back P.J. Locke III put it, “all the Chrises on the team are crazy,” has been viewed more than 100,000 times.

On March 19, Herman said Bimage’s squat was a still-impressive 610 pounds. Bimage tweeted earlier this year that he squatted 450 pounds when he joined the Longhorns last summer.

“Dude can lift a car,” Locke said. “That’s a freakish lift. It just shows you what Coach Yancy is doing to the program. That’s an exciting thing.”

So what do those numbers in the weight room mean? Quarterbacks, after all, throw footballs, not dumbbells. The next time a player scores a touchdown while on the bench press will be the first. And for what it’s worth, McKnight’s teams at Iowa State, Houston and Texas have combined for a 58-57 record.

The Longhorns, however, are of the belief that what happens in the weight room matters.

“Certain lifts are for explosiveness,” said Charles Omenihu. The senior defensive lineman added that a power clean of 315 pounds and a 535-pound squat have helped his “get-off” move. “I just think those things translate. You put in hard work; the output will be results that you want.”

Regarding on-field results, McKnight said a large emphasis is put on the power clean and squat “because those are athletic movements.”  He de-emphasizes the bench press because it is a “tough lift” on the shoulders.

When asked Thursday if this Texas team is stronger than it was last year, McKnight answered in the affirmative. As for whether that improvement in the weight room will help Texas on the scoreboard, only time will tell.

“All that, it will transfer to the field,” Locke said. “It will show we’re faster; it shows we’re more explosive. Now we have to take it to the field.”

Longhorns have a good problem out wide; Lots of receivers, only one football