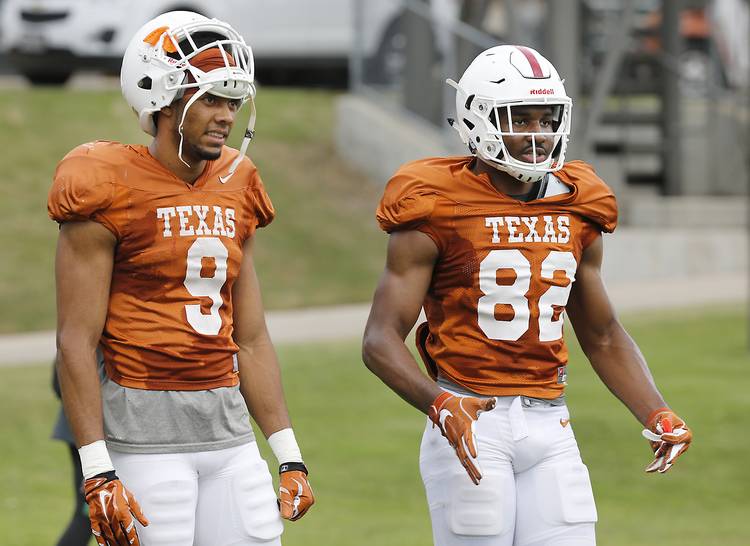 The Longhorns have multiple game-breakers at receiver, and coach Tom Herman wants to use all of them.

“Down the field throws, we’ve instructed our quarterbacks that if it’s man-to-man on those guys with no (safety) help, that should be the first place they go,” Herman said after Sunday’s practice.

It’s just there’s only one football. Granted, as Herman admits, this is “a good problem to have, trust me.” So how can the UT coaching staff use Collin Johnson, Lil’Jordan Humphrey and man-child freshman Brennan Eagles effectively in games?

“It is a conversation every day in the offensive staff room,” Herman said. “There’s only so many pass plays in a game, if we’re talking about the receivers. You’re going to see, I would imagine, quite a few relievers play, which is great, and I would imagine they’ll be fresh.”

Johnson and Humphrey finished 1-2 on the team last season in receiving yards. Together, they combined for 91 catches for 1,196 yards and three touchdowns. The next three receivers — Reggie Hemphill-Mapps, Armanti Foreman and Lorenzo Joe — have left the program.

Texas hasn’t produced a 1,000-yard receiver since then-quarterback Tyrone Swoopes helped John Harris cross that threshold in 2014. Johnson was thought to be a no-brainer candidate for the Biletnikoff Award last season. But he wasn’t as physical as the coaches liked and was inconsistent.

Going into this season, Johnson said, “Just control what I can control. If I can do that in practice day in and day out, it’s going to carry over to the games.”

Sterns making headway: The Longhorns may not have to look far for DeShon Elliott’s replacement at safety. Three days in, freshman Caden Sterns is running with the first-team defense and already turning heads.

Watching the backfield: Texas will have its first practice in full pads on Wednesday. Until then, it’s hard to gauge how physical anyone can be. Still, Herman is feeling good about his seven scholarship running backs, including newcomers Tre Watson and Keaontay Ingram.

“I”m not ready to crown ’em yet,” Herman said. “I’ll never do that after one day in pads. But it’s obvious we’ve developed at that position.”

Pursuing the football: Reporters are allowed to watch only 20 minutes of practice each day. During that window, the entire defense participates in pursuit drills, a staple of every football workout just about everywhere.

Each unit first begins on the sideline. The 11 players clap and then run onto the field and line up. After the snap, all 11 are expected to move to the ball carrier. Coaches will then throw it up for a turnover, and the entire unit is expected to run the other way for a theoretical touchdown.

Defensive coordinator Todd Orlando handles the snap, and Herman acts as the quarterback.

“I get to see with my own eyes who the real hustlers are on our team rather than finding out on fourth-and-1 in Washington, D.C.,” Herman said. “Also I think it adds credence to the drill when the head coach is there and is active in the drill.”

Monday off day: The Longhorns will take their NCAA-mandated day off on Monday. Players are scheduled to attend massage treatments and generally rest their bodies. The team will then begin two weeks of workouts at the Whitaker Sports Complex on Tuesday.

Speaking of NCAA rules, it drives Herman crazy how the players must have two workouts in shirts and shorts and then two more workouts wearing just helmets and shoulder pads. To him, that’s not real football.

“Shoulder pads are protection,” he said. “Why we would go out there with metal face masks with no protection on our shoulders?”