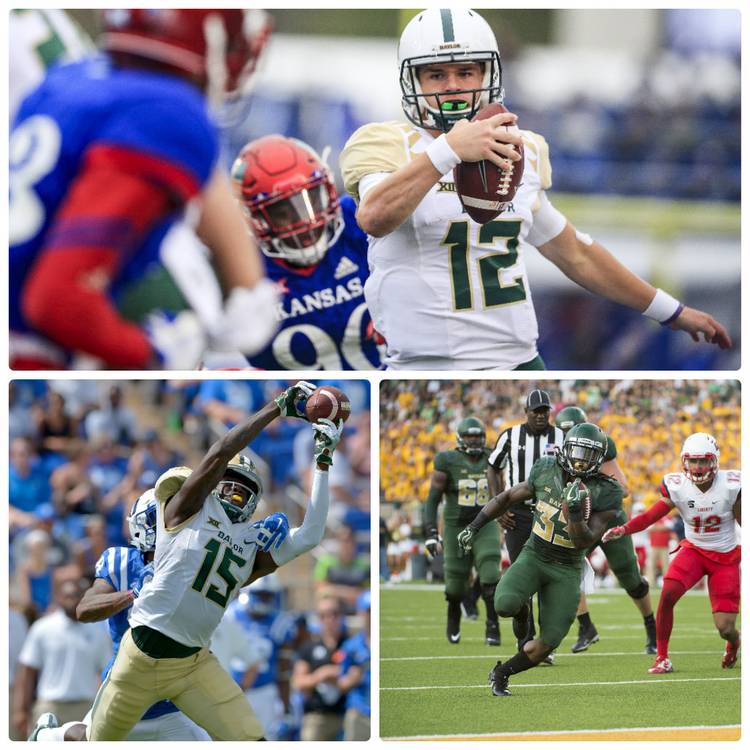 Baylor’s offense just wasn’t its normal, high-flying self a year ago. Here’s a key, but telling statistic: The Bears managed only 876 offensive snaps. It was the first time since 2010 that Baylor didn’t hit 1,000.

There were a myriad good reasons ranging from a coaching change to injuries to a lack of quality depth.

On paper, Baylor looks to be headed more towards its normal self, although no team is going to hit the offensive heights reached during Art Briles’ tenure.

Charlie Brewer, who was co-Big 12 offensive freshman of the year a season ago, returns as starting quarterback. That’s a good sign for consistency. He earned the job in the final month of last season after coach Matt Rhule saw that the then freshman brought a spark. Brewer directed the Bears to their only victory of 2017.

Brewer is the only scholarship quarterback on the roster who has completed a pass in Waco. Jalan McClendon, a career backup at North Carolina State, joined Baylor this summer and could push Brewer for the starting job. Gerry Bohannan, a four-star prospect and early enrollee, would be third on the depth chart and is a likely redshirt candidate.

Rhule said he wants to make sure that Brewer doesn’t become mired in a mental slump that can hit sophomores who try to over-think rather than rely on offensive muscle memory.

“So, you know, (former SMU coach) June Jones, years ago, taught me when you play a quarterback as a true freshman, they’re playing on instinct,” Rhule said. “You slow the offense down, they’re whipping it around, and the next year they try to learn the system and they have a tendency to maybe dip a little bit … So the key is to keep Charlie, is to have him continue to be the guy that’s laughing at me in the huddle, telling me to calm down. He was a true freshman telling me to calm down in the middle of a game. He’s got that to him. He’s got that ‘it’ factor to him.”

Brewer needs to grow as a passer while at the same time keeping his energy, Rhule said. “And he has some threats behind him,” he said.

Baylor’s quarterback will have a bevy of talented receivers to help him. Receiver is a strength of the team:

Rhule’s offense needs a good running game. There’s not a feature back, as yet. Rhule described it as “we have to make some steps.”

JaMychal Hasty will have first crack. He can run and catch — check the nine catches he had in a game last year against Texas Tech. He was injured in last year’s season opener and missed four games.

John Lovett, as a freshman, led the team in rushing last fall with 445 yards. He’ll contend with Hasty for the top spot on the depth chart.

“I like our team,” Rhule said. “I like our mix of guys. … The roster is coming around. Is it a year too young? Is that youthful experience going to step up and play like grown men? I put my money on our players all the time. I believe they’re going to step up and they’re going to play and I even felt like at the end of last year, while we weren’t winning games yet we were still a team that was, we weren’t an easy out. We were going to play you tough and take you down to the wire.”