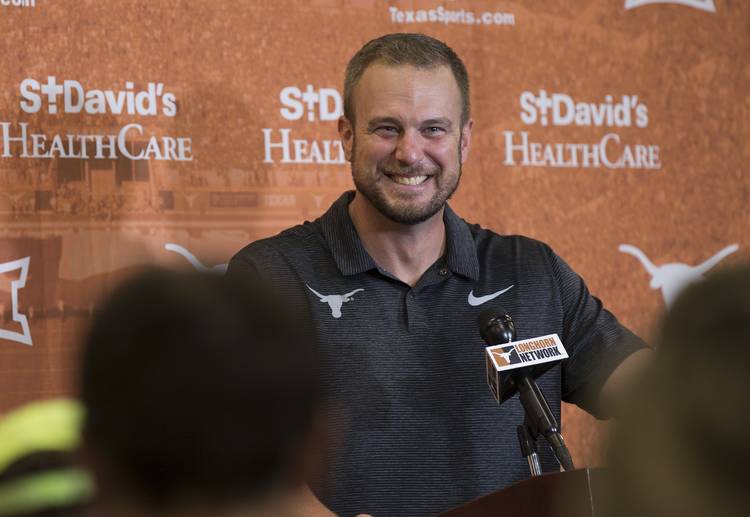 Recruiting services began ranking recruiting classes at the start of the century. Since then, the trio of Texas, Texas A&M and Oklahoma have failed to all finish in the top 10 in the same class. That could change in 2019 because of the recruiting success enjoyed so far by the Sooners and the Aggies. It is the Longhorns that are uncharacteristically bringing up the rear this cycle. Texas holds 15 commitments and its class ranks 10th in the nation, per the 247Sports composite.

A&M leads the pack with the third-ranked recruiting class, though some of that is due to sheer numbers. The Aggies hold 24 commitments, more than any other team in the top 10. Oklahoma is ranked fourth and holds 17 commitments. Let’s examine the three classes and look at what is left for each program with the prep season quickly approaching:

Tom Herman and his coaching staff faced multiple issues heading into the 2019 class. The success of the 2018 class, which finished third in the nation and consisted of 27 players, gave rivals a talking point on the recruiting trail. The Longhorns adjusted by focusing efforts out of state at some positions. Seven of the 15 current commitments play outside of the Lone Star State and that number is likely to reach double digits by national signing day. The success of A&M and Oklahoma inside the state meant Texas wasn’t going to repeat its dominance of 2018.

Still, Texas is inching up the recruiting ranks and is focused on quality over quantity in 2019 after securing its backbone of the future with the 2018 class. The core of the class is at wide receiver, tight end and offensive tackle. Texas did a great job securing commitments from Whittington and out-of-state talents like Jake Smith and Demariyon Houston. The Longhorns hold commitments from two of the top tackles in the country in Johnson and Javonne Shepherd. Herman continues to build depth at tight end with commitments from Brayden Liebrock and in-state talent Jared Wiley.

A glaring need remains at running back. It’s the only position Texas has yet to land a commitment at for 2019 and it appears UT will head out of state for a prospect like Derrian Brown, Noah Cain or Trey Sanders. Katy star Deondrick Glass is the only in-state running back with an offer from the Longhorns. The core at linebacker also will be complete if the Longhorns can land four-star middle linebacker David Gbenda from Katy Cinco Ranch.

Texas A&M is enjoying recruiting success in much the same way the Longhorns did in Herman’s first full cycle as head coach. Jimbo Fisher was hired too late in the game to impact much of the Aggies’ 2018 class, instead focusing his early attention on building strong relationships with prospects in the 2019 cycle.

It’s paid off in a big way. The Aggies are running the state in 2019, holding commitments from 12 members of the Fab 55, which is the same amount as Texas and Oklahoma combined. It started with safeties Brian Williams and Demani Richardson. The exclamation point was surprising pundits with a commitment from Leal early in the cycle.

Like Texas in 2018, Fisher can take more than the 25-man limit in 2019 because of a smaller signing class last cycle. That means A&M isn’t done despite already holding 24 commitments. The Aggies are in good position for a few more Fab 55 members like Marcus Stripling and David Ugwoegbu. A&M continued its in-state dominance with a commitment from four-star wide receiver Dylan Wright on Monday night. Wright held an offer from Texas and became the  13th member of the current Fabulous 55 to pick Fisher’s program.

Consistency and success is what Oklahoma offers on the recruiting trail, and it routinely pays off in the Lone Star State. The 2019 cycle is no different as the Sooners picked up commitments from a trio of superstar offensive prospects from Texas in wide receivers Bridges and Wease, as well as tight end Austin Stogner. Add in Rattler, an out-of-state quarterback, and Oklahoma’s offensive class is scary. So scary that the group essentially won The Opening Final after all being placed on the same 7-on-7 team in Frisco.

With 17 commitments, Oklahoma still has work to do before signing day. The top priorities are finding another offensive tackle, adding help at safety and finding a player or two that can blitz off the edge. JUCO defensive end Jacoby Jones, also a target of Texas, is favored to pick the Sooners and provide instant help in the area for the 2019 season. Targets on the West Coast may fill the voids at offensive tackle. Daxton Hill, a five-star prospect from Oklahoma, is the top target at safety.

Triplets of the Big 12: Iowa State may have the top tailback in the conference (and next year’s draft)

Triplets of the Big 12: Kansas’ David Beaty knows he needs an offensive revival to survive another season