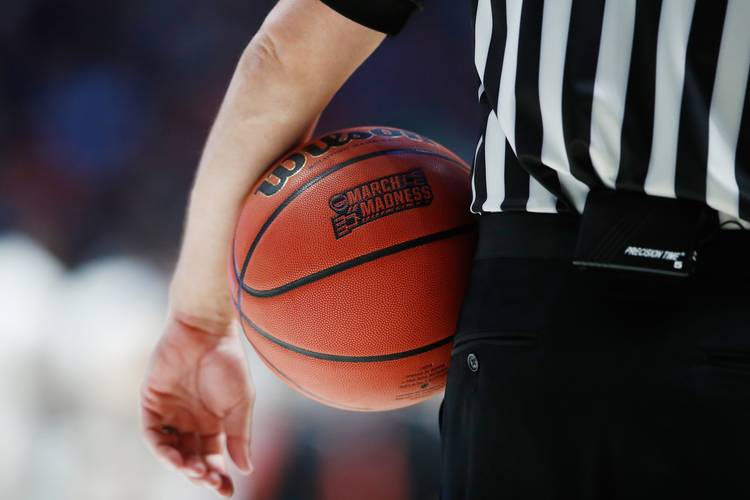 A detail of the March Madness basketball logo as seen during the first half between the Cincinnati Bearcats and the Nevada Wolf Pack in the second round of the 2018 Men's NCAA Basketball Tournament at Bridgestone Arena on March 18, 2018 in Nashville, Tennessee. Andy Lyons/Getty Images

College basketball players have more power than ever thanks to a sweeping set of new rules adopted by the NCAA on Wednesday.

Some involve common sense changes, like being able to work with an agent in the clear light of day and allowing undrafted players to return to school. Others are minutiae. The two that will generate the most headlines are issues aimed at cleaning up a sport swamped by a FBI investigation into corrupt recruiting practices.

Starting this season, players can begin working with an NCAA-certified agent once they request an evaluation from the NBA undergraduate advisory committee. That’s usually the first step toward determining whether a player should go pro.

Agents can pay for meals and transportation to help in the agent-selection process, the NCAA said in a statement. Any written agreements between players and agents must be submitted to the NCAA.

“I’m pretty sure the big, big-time guys, they’re getting an agent and they’re rocking with this new rule,” Texas guard Matt Coleman said Wednesday. “I can’t really speak for no one else. But knowing my family, I’ll probably stay away from agents until it’s my time.”

“Can you make money off yourself or no? Then, no comment,” Osetkowski said. Per NCAA rules, players still cannot make money from their own name, image and likeness. “If I can’t make money, I don’t need an agent.”

Now, players who attend the NBA scouting combine and then go undrafted can return to school. Under previous rules, underclassmen had 10 days after the combine to decide whether they wanted to stay in the draft. If they stayed in, they lost their amateur status.

Players who return to school cannot be drafted until the following year.

“I don’t see the reasoning why you couldn’t do that in the first place,” Osetkowski said of being able to return to school. “But I think it should be good. It’ll be good for players to see where they’re at, see what they need to get better at if they don’t get drafted.”

It’s important to note that players must be first invited to the NBA scouting combine. Had these rules been in effect two years ago, someone like Isaiah Taylor would’ve had a tough choice to make. He was not invited to the combine yet chose to go pro. Taylor was not drafted but still battled his way to the NBA via the developmental league.

Also, the NCAA has tripled the amount of recruiting visits basketball athletes can take. Previously, recruits could take just five official visits. Now, recruits can essentially opt for five visits as a high school junior, five more as a senior and then five between Oct. 15 after high school graduation to the completion of college graduation.

That last window will get most coaches’ attention. The website verbalcommits.com has tracked 784 Division I transfers so far in 2018 alone. Players come and go for a variety of reasons. Some schools actively recruit players who might make graduate transfer candidates.

Another new rule is aimed at helping athletes earn their degree. The NCAA said that all Division I schools will be required to pay tuition, fees and books for athletes who leave school after two years but return within a 10-year window. The NCAA is establishing a fund for schools that cannot afford to pay financial assistance.