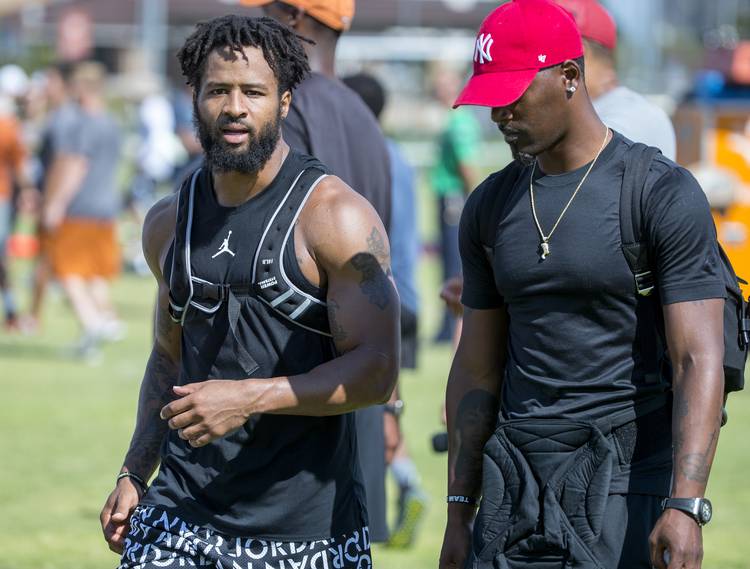 Former Texas Longhorns Earl Thomas and Aaron Ross visits the team as they runs through drills during their open practice to the media at Wright Whitaker Sports Complex Wednesday, Aug. 8, 2018. RICARDO B. BRAZZIELL / AMERICAN-STATESMAN

Earl Thomas may be the NFL’s most popular holdout. But on Wednesday, he was just a Texas ex watching his Longhorns toiling away at the Whitaker Sports Complex.

Thomas, Aaron Ross and Michael Huff all stood together chatting about the current crop of defensive backs. That’s two Thorpe Award winners and one finalist, for those keeping track. Cornerstones of “DBU.”

The first day in full pads drew quite the crowd. It was a perfect hitting weather, sun-splashed skies with thin, wispy clouds overhead. The right amount of hot. And veteran nickel back P.J. Locke III delivered the first lick, slamming receiver Collin Johnson to the ground in a way that got everyone’s dander up.

Real football — not flag, not 7-on-7, not drills in shirts and shorts — is back in session.

“The receivers, they’ll talk,” Locke said before training camp. “And some days they get us. But our pride, we can’t lose. We don’t want to lose.”

Even though he’s a senior with 32 career games on his resume, Locke is someone who needs a hard-hitting August. The Longhorns are high on their new crop of freshmen defensive backs. Safety Caden Sterns is already running with the first-team defense.

Last season, Locke went to Big 12 media day and became a team captain. He started in seven games but missed the next four with an ankle injury. Locke returned for the Texas Bowl and finished the year with 32 tackles and one pass break-up.

Going into this season, there hasn’t been hardly any talk about Locke at all. Not that there’s anything wrong with that, mind you.

“P.J. goes about his business. He’s a pro,” Texas coach Tom Herman said. “He knows how to take care of his body. He knows every assignment. He knows where to be and how to be there. I wouldn’t make much about not talking about him. I don’t know that I was asked about P.J. Locke. He’s doing great. Doing great.”

Locke figures to be an integral member of UT’s defense again this season. The pass-happy Big 12 forces defensive coordinators to stick with five- and possibly six-defensive back packages. It’s likely Texas will start veterans Kris Boyd and Davante Davis at corner with Brandon Jones at safety along with Sterns. Locke is on and off the field based on various down-and-distance situations.

“Our main focus (this offseason) was to develop and finish,” Locke said. “We had a great spring, we had a great summer and people are still getting stronger. Now we’re looking to finish this fourth quarter in fall camp and go into he season looking to put everything together.

“We’ve got to put the pieces of the puzzle together and come out with a bang.”

McCulloch injured: Herman said linebacker Jeffrey McCulloch suffered a strained pectoral muscle and will be out for two weeks. In the meantime, freshman DeMarvion Overshown has moved from defensive backs to linebacker to plug the hole.

“We’re already thin in that linebacker room, so we felt that he’s the closest young guy to being suited to play that position,” Herman said. “It’s not a permanent move yet. But we need bodies there to take reps and he’s more than willing.”

RELATED: Meet the new Longhorns: ‘Upside’ is the key word for DeMarvion Overshown

By cross-training at different positions, Overshown is only making himself more valuable to the coaching staff. He was rated the fifth-best safety prospect in Texas last year by 247Sports and third overall on the American-Statesman’s Fab 55 recruiting list.

“He was excited about it,” Herman said. “It gets him on the field, gets him playing football. When Jeff gets back, we’ll figure out what we do from there.”

Also on Wednesday, Herman said running back Tristan Houston landed wrong on a football and suffered bruised ribs. He is day-to-day.

Watson still slow: Graduate transfer Tre Watson is still wearing a green non-contact jersey during practice. The running back is going through all drills but is being held out of full 11-on-11 work.

Last week, Herman hoped to have Watson going full speed by now. But team doctors are still taking a cautious approach with the player who had off-season surgery to repair a torn anterior cruciate ligament. Watson suffered the injury in September while playing for California.

Herman said doctors will test his strength levels again on Monday. “Hopefully by then, those strength levels test closer to even enough that the medical staff feels like he could be tackled and keep running,” the coach said.

Enjoying gameday: Herman will take no credit for announcing $5 beer prices as part of the new “Bevo Boulevard” pre-game experience at Royal-Memorial Stadium.

“No, I didn’t push for it,” Herman said. “I didn’t even know what the price of beer was, to be honest with you.”

But Herman is excited about the changes coming to San Jacinto Boulevard that will radically alter the pre-game feel.

“I hope our fans are as excited as we are about it,” Herman said. “This is the way college football is supposed to be. It’s going to be a celebration of our university on six Saturdays a year.”

Triplets of the Big 12: Kansas’ David Beaty knows he needs an offensive revival to survive another season