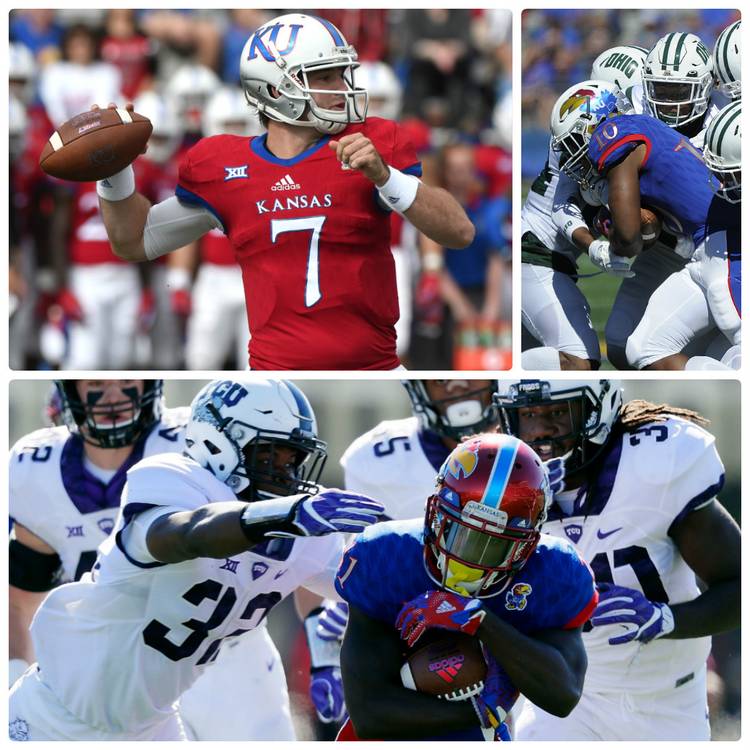 WR: Steven Sims Jr. (2017 — 59 catches for 839 yards and 6 TDs; Texas history — Has 16 catches for 132 yards in two career games against the Longhorns, and has led all pass-catchers in both games. He had 9 catches for 53 yards and scored KU’s first touchdown last year.)

Kansas coach David Beaty is always upbeat, even when trying to put a positive spin on his three-win tenure with the Jayhawks.

But time may be up with the Beaty coaching project in Lawrence, especially considering that the school hired Jeff Long as its athletic director. Long, formerly of Arkansas, took over the program earlier this month. His first big hire was a senior associate athletic director to oversee football.

Beaty said the two have talked about the future of the program.

“I think it’s going to be a terrific marriage between us as we move forward,” Beaty said of his talks with Long. “And the thing that he also has shared with us is that he is completely and totally behind us and anything he can do to help he’s there to do it.”

If Beaty can give himself more time, it makes sense that he’d do it on offense. He’s an offensive-minded coach in an offensive-minded league. Before the 2017 season, he lured Doug Meacham from TCU to be his offensive coordinator. So the Jayhawks, in theory, should be able to field a decent offense, right? That hasn’t been the case.

In Beaty’s three years, Kansas has finished last in the Big 12 in total offense each season. It’s basic math — if your offense can’t manage to keep up in this dynamic league, there’s basically no way you can win.

But if Beaty can figure out his quarterback situation and rebuild his offensive line — all big question marks — he has some playmakers on the roster. Plus he sports a senior-laden team.

Beaty has to choose a starting quarterback, and he’s in a hurry to do so. Peyton Bender and Carter Stanley are the two main candidates. Both made starts last year. But because neither did that well in 2017, Miles Kendrick, a dual threat JUCO quarterback who transferred from College of San Mateo, now is in the mix.

The offensive line also remains problematic. Beaty canceled the spring game in part because he had only eight linemen healthy enough to play. Over the summer, Kansas signed six offensive linemen. Three are grad transfers from four-year schools. The other three are from junior colleges.

The playmakers on the team are at running back (Khalil Herbert) and receiver (Steven Sims).

Herbert rushed for 663 yards, which isn’t a bad total. But he was woefully boom or bust. He rushed for 291 yards against West Virginia, which was the third highest total in school history. It also was the top outing of any Big 12 tailback last fall, although Herbert’s team still lost, 56-34. Herbert also had 137 yards in a loss to Ohio. Both games were in September.

But in the second half of the season, Herbert never had the same dazzle His best performance post-WVU was the 71 yards he gained in a loss to Baylor.

Sims also had some nice numbers last fall. His 839 yards receiving ranks fifth best among returning receivers in the Big 12. He enjoyed a career day against Kansas State with 233 yards. Statistically, that was the third best performance by a league wideout in 2017.

Sims had two other games of at least 100 yards — 142 in the season-opening win against Southeast Missouri State, then 102 in a loss to Texas Tech.

But defenses can scheme to take out one good receiver or one decent tailback, especially if the starting quarterback is shaky and the offensive line lacks cohesion. Beaty needs some life in his offense if he’s to continue life as he knows it in Lawrence.