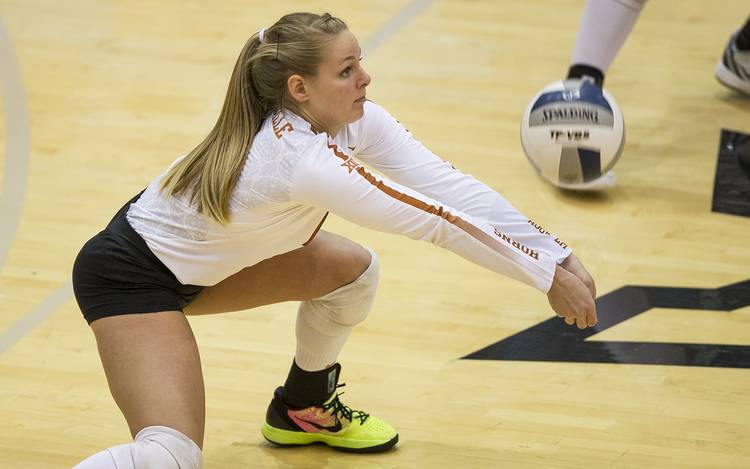 For the first time in four years, a Texas volleyball player not named Cat McCoy will be wearing black on a full-time basis.

McCoy, UT’s longtime libero, is gone, and she took her Texas record of 1,801 career digs with her to grad school and the beach volleyball court at the University of Washington.  Juniors Autumn Rounsaville and Claire Hahn are among the candidates to replace McCoy. Freshmen Sydney Petersen and Jhenna Gabriel are also eyeing the job.

On the volleyball court, the libero is the anchor of the defense, and rules allow that position to enter and exit a match without counting against a team’s substitution limit. The defensive anchors can serve but aren’t allowed to attack on offense, and they don a different-colored uniform than their teammates. Texas usually outfits its libero in black.

“I think the realization that Cat is gone and that prize is out there, it’s something they’ve all been working for,” Texas coach Jerritt Elliott said. “I’m interested to see who can develop in that role.”

Elliott expects UT’s early-season opponents — four of which are ranked among the top ten teams in a AVCA preseason poll that Texas ranks third in — to test the new backbone of his defense. Elliott would prefer for the libero in UT’s season opener against Oregon on Aug. 24 to hold onto the gig. He, however, isn’t opposed to a line-up change.

This week, the players insisted that their competition has been cordial. Rounsaville and Hahn, in fact, have been roommates since they arrived on campus. According to Rounsaville, the veterans have attempted to take the newcomers “under our wing.”

Four sets of eyes, though, remain on a certain prize. Said Hahn: “We all know that this is what we’re working for.”

Softball is a religion in the town of Dripping Springs, and Rounsaville was among the sport’s congregants during her childhood. Softball, it turned out, wasn’t for her. “I wasn’t very good at it and every time I struck out, I would just start crying,” she recalled. Her sister, though, seemed to enjoy volleyball, so Rounsaville tried that out. That decision led to four varsity seasons at Dripping Springs High and a state championship in 2015.

At Texas, Rounsaville immediately found playing time as a defensive specialist during a freshman year that was capped by an 18-dig performance in the NCAA title match. For her career, Rounsaville is averaging 1.79 digs per set. Elliott recalled that the junior was close to taking the job ahead of last season, and she was UT’s libero for one set in two non-conference matches.

Rounsaville’s digs-per-set increased from 1.63 to 1.92 during her sophomore season, but she slumped at the service line. Rounsaville is admittedly soft-spoken, a possible hinderance for the quarterback of UT’s backline. Elliott has been told she has been more demanding in off-season workouts and had “a breakout weightlifting summer.”

A product of Westlake High, Hahn first picked up a volleyball when she was in the third grade. Throughout the years, Hahn has been told she has a calming presence on the court. Hahn views that role, as well as an ability to communicate, among her strengths.

As a sophomore, Hahn averaged 1.43 digs per set, contributed nine aces and had 14-dig matches at Kansas and Kansas State. During this spring’s scrimmage against Texas A&M, Hahn split libero reps with Rounsaville.

The junior played in 94 of UT’s 106 sets last year. As a freshman, she appeared in 77 of 120 possible sets. Hahn said the playing time at the beginning of her college career bothered her since “I feel like I put this weight on me that volleyball is everything.” With age comes wisdom, though.

Petersen will inherit McCoy’s No. 8 jersey, but don’t read too much into the numerical listing on UT’s roster.  Petersen has long worn the No. 8, which once belonged to her mother, Bobbi. Her twin sister, Baylee, will wear No. 8 at Northern Iowa, a school that has employed their mom as its head volleyball coach since 2001.

Standing 5-8, Baylee Petersen will be an outside hitter for her mother. Sydney once played near the net as well, but her 5-4 frame suggested that she’d be better off on defense. During her senior year at Iowa’s Dike-New Hartford High, Under Armour named her a second-team All-American.

“The key for us is our first contact. If we’re good with our first contact, then with the players we have, we can be overwhelming to teams,” Elliott said. “Sydney has shown she can pass consistently for long periods of time. I think she’s good with her routines.”

Still adjusting to the pace of the college game, Petersen said practices ahead of the team’s trip this summer to Europe were eye-opening. Elliott said the freshman also needs to learn more about her potential role as the leader of the back row.

Elliott concedes that Gabriel’s defensive inexperience likely makes her a longshot in the libero competition. Her on-court speed, which Elliott has compared to former setter Chloe Collins’, does makes her an intriguing prospect.

Gabriel is a setter by trade, and the Hawaii native grew up rooting for the Rainbow Wahine and ex-Hawaii setter Mita Uiato. The freshman is the all-time leader in assists at Honolulu’s Maryknoll School. Although the 5-8 Gabriel is classified by Texas as both a setter and libero, an incumbent setter exists in sophomore Ashley Shook, so more playing time will be available on defense.

Gabriel, who also set her high school’s record for career digs, is ready for her new challenge.

“For me, it was just doing whatever I could to get on the court,” Gabriel said. “If that is a DS, then of course I’ll work myself really hard to fall in line with that and increase my skill in that area of the sport.”