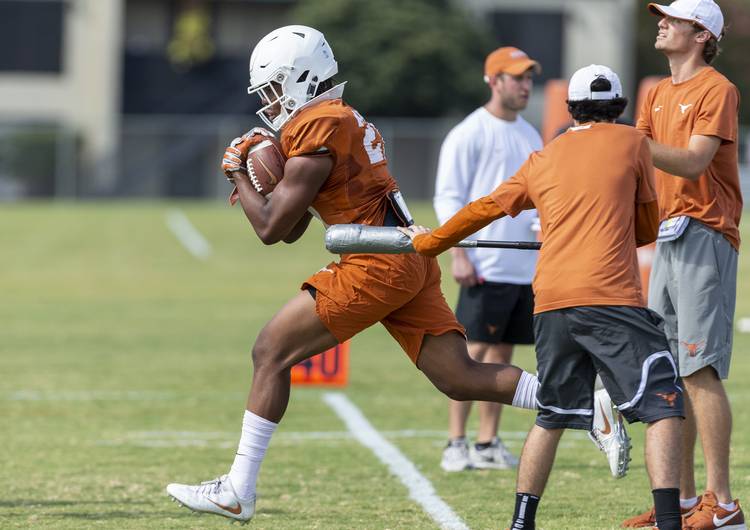 Texas running back Keaontay Ingram runs a drill during practice at Wright-Whitaker Sports Complex on Tuesday. Stephen Spillman / for American-Statesman

Start bringing your pickaxes, pans and metal detectors out to Texas football practices for the next three weeks. Mining for nuggets about this group could prove difficult.

Throughout the first week, Texas coach Tom Herman was positive but subdued about his charges. The Longhorns had their first team scrimmage Saturday, and while it wasn’t open to the public or reporters, there wasn’t much to be gleaned afterward.

On the quarterbacks, Herman said, “It’s hard to tell without looking at the film. I don’t think it would be fair.”

On the defense, the coach said, “We’re not out there grading anything. We’re out there administering practice.”

Herman admitted the defense did force two fumbles. Earlier in camp, the offense had to stay afterward and run 50 yards’ worth of up-downs because of two turnovers. The offense had some post-practice conditioning Saturday, too.

“The ones that bother me are fumbles,” Herman said. “That’s a choice that you make to be loose with the football. Sometimes interceptions happen. You can bait a quarterback into seeing something that’s not there. Or, there’s tipped balls. But when you fumble the football, that’s a choice.”

Starting this week, training camp will feel like “Groundhog Day.” The players will have their mandatory day off Monday, and then it’s back to the grind. The season opener against Maryland is Sept. 1, which seems eons away at this point.

Asked about his big-picture view after one week, Herman said, “I like this team. They compete. They talk to each other, which is a really good thing. When things are good and when things aren’t going good. It’s not a comfortfest out there. There’s some confrontation at times, which is a good thing within families.

Watching Ingram, Young: One of the most interesting aspects of Saturday’s post-scrimmage breakdown was Herman’s thoughts on freshman running back Keaontay Ingram.

Not only that, but Herman said Ingram “runs with the (first team) quite frequently.”

The Longhorns are anxious to see someone, anyone, become an explosive playmaker in the backfield. Graduate transfer Tre Watson still hasn’t been given full clearance by the medical staff in his recovery from a knee injury, although that could come soon.

Herman indicated that sophomore Daniel Young is one who has a stronger, physical frame. “Daniel’s the kind of guy, he doesn’t do anything that will wow you, but he does everything really good,” Herman said. “That’s really good. But I do think he’s developed.”

Wheeler must sit: Herman reminded reporters Saturday that linebacker Anthony Wheeler will be suspended the first half of the season opener against Maryland. That’s because he was ejected for targeting against Missouri in the Texas Bowl. NCAA rules require that any player who commits targeting in the second half of a game must sit out the first half of the next game.