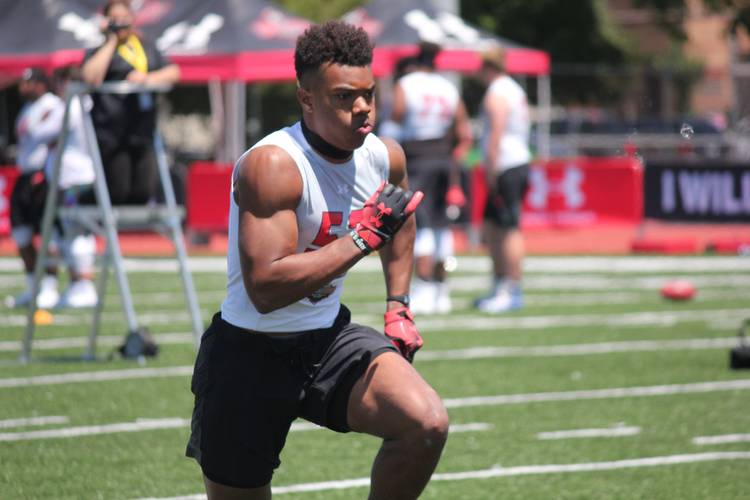 Elijah Higgins prefers mystery. The four-star wide receiver released his top seven schools on July 10 and has remained relatively quiet about his recruiting status over the past month. The 6-3, 214-pound prospect from Austin Bowie ranked No. 23 on the recently updated Fabulous 55. He’s considered the 16th-best receiver prospect in the 2019 class and holds 28 offers. His final seven includes Texas, Ohio State, Florida and Stanford.

“Really just researching. I don’t like putting all my business out there, and that’s just who I am,” Higgins said. “I’m kind of quiet and do my own thing. I’m getting close to deciding.”

Higgins is one of 11 uncommitted members of the Fab 55. The new rules allowing juniors to take official visits sped up an already fast process. The 2019 class is likely to follow the precedent set by the 2018 class, when more than 75 percent of Power 5 commitments signed a national letter of intent during the early signing period in December rather than wait until the traditional signing date in February.

“(I) want to do it before November,” Higgins said. “I want to get to a few places on game days and take it slow. I’ve thought about (recruiting) a lot over the past several months. I talked to my parents about taking some more time and enjoying the moment, so I’ll be taking a few officials in the season.”

Higgins said Texas, Florida and Stanford will account for three of his remaining four official visits. He took an official visit to Ohio State this summer. Arkansas and Auburn are also in the mix for a fifth visit if Higgins’ schedule allows. The recent momentum for Higgins appeared to be toward Florida and Ohio State. The Longhorns are still a contender.

“Texas is real with me. I have a great relationship with coach (Drew) Mehringer and the rest of the coaching staff,” Higgins said. “I obviously love Austin and it’s right across the street. I’d be able to see my family whenever I want to.”

Drama surrounds the Ohio State program with head coach Urban Meyer on paid leave while an investigation is conducted regarding former receivers coach Zach Smith and alleged domestic abuse between Smith and his ex-wife. Higgins didn’t want to get into details about the behind-the-scenes conversations between recruits and the coaching staff, but he did offer a sense of how the Buckeyes are handling the situation on the recruiting trail.

“Ohio State is being honest with me about the process. I can’t exactly say what all is being said to me, but I know they’re being straight with us and keeping us informed,” Higgins said Saturday after a training session in Cedar Park. “They’ve been truthful and honest with what is going on.”

Texas out of mix for local star?

Round Rock Cedar Ridge wide receiver Jaylen Ellis was offered by Texas on May 26. It immediately moved the Longhorns toward the top of his list despite a long-standing commitment to Baylor. Since then, Texas picked up a commitment from Demariyon Houston, a similar player to Ellis in size and skill set. That could leave Ellis without a spot at Texas, and it’s caused the member of the Fabulous 55 to take more time and slow down the process.

“I’m still cool with Texas, but we talk about what spots are left and where I’d fit in or if there would be a spot for me,” Ellis said. “Recruiting is a struggle. It’s more than just football. It’s an eye-opener to go through the process and juggle football at the same time.”

Ellis can still take five official visits before signing a national letter of intent. He specifically mentioned Arizona, Houston, Baylor, Michigan and Tennessee as his top schools and the programs most likely to receive a visit from the two-time first-team all-district selection. Ellis described his commitment as “open” despite the pledge to Baylor.

Ellis is known as the best vertical threat in Central Texas, which is a big boast considering Garrett Wilson, the state’s top recruit, also hails from Austin. The 6-foot, 180-pound speedster averaged 24.5 yards a reception on 79 receptions over his past two varsity seasons. He doubled his production as a junior, recording 56 catches for 1,248 yards and 14 touchdowns. The three-star recruit added more to his arsenal in the offseason.

“My route-running is the most improved aspect of my game from last year to this year. I can know line up in the slot and work the short and intermediate routes,” Ellis said. “That makes it harder for a defense to find me because I won’t just line up in one place every play.”

Triplets of the Big 12: Oklahoma State is looking to replace two offensive heavyweights