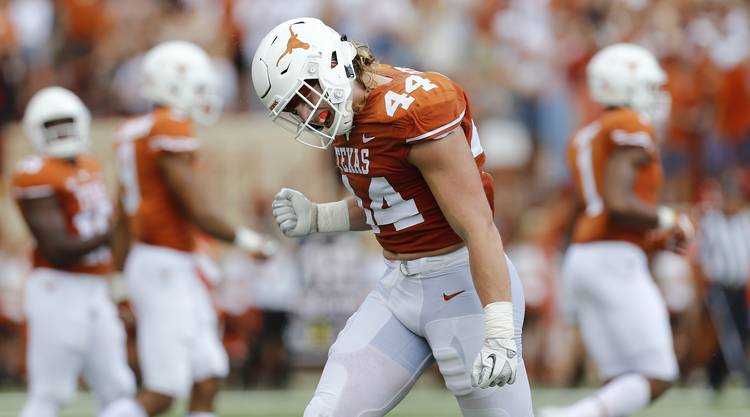 We should all be so lucky to walk this Earth like Breckyn Hager. A gregarious personality, the forged 6-foot-3 frame and all that blonde hair make him an impossible wallflower.

And the cool thing about this impeccably cool Longhorn is that he knows it, too.

“I can’t tell you what I see in my future because it’s just too bold,” the Texas senior said at Big 12 media day in July. “I want to just do it and then be like, ‘Hey, what’s up?’ Because y’all are going to love me when I’m winning. Everyone loves a winner. You can’t say anything wrong when you’re a winner.”

Why don’t you consider yourself a winner, Breckyn?

“’Cause I ain’t done nothing yet,” he continued. “And I gotta do it. Just know that I’m making myself and my boys work as hard as I possibly can.”

This is exactly the reason why Texas fans should love Hager, the fourth son in a football family from Westlake. He’s an introspective soul who is fully aware of his family’s UT history and is determined to carve out a path of his own.

For non-orangebloods, Hager’s father, Britt, is considered one of the best linebackers in Longhorns history. A first-team All-American in 1988, he still holds the school records for career tackles (499), most tackles in a season (195) and most in one game (27).

By comparison, Breckyn Hager has 101 tackles and 10 sacks in 33 career games.

“Colossal individual statistics mean nothing,” Hager said. “They don’t stand the test of time unless you win games. My father is a case of that here at the university. That’s the greatest linebacker statistically individually, like, ever. Ever! And you don’t hear anything! That’s because they didn’t win. That’s the only thing that matters.”

To Hager’s point, the Longhorns went 4-7 in Britt Hager’s final season, and Texas never won more than eight games during his time on campus. Breckyn’s best season came last year when the Horns went 7-6. That’s why he’s so passionate about this point and wanting to win this season, his final one at UT.

“Your individual statistics do not matter,” he said. “And I mean that.”

Britt Hager and his wife Bridgette, high school sweethearts at Odessa Permian, had four football-playing sons. The first three all signed college scholarships. Bryce Hager played at Baylor and is now with the Los Angeles Rams. None of them were offered a chance at Texas, though.

Britt thought about Breckyn’s upbringing and said, “He’s a late bloomer. He’s always been skinny. In Pop Warner, I thought he was special. He scored six touchdowns in one game. I  mean, look at him. He ain’t no running back. He just had a unique way of people missing him.”

Even with a genetic advantage, it wasn’t easy. At Westlake, Hager suffered a broken leg while trying to attempt a dunk in the gymnasium. A broken collarbone short-circuited his junior season.

Hager was set to follow his brother’s path to Baylor. It was practically a done deal. But in September 2014, UT coach Charlie Strong went to the Temple-Westlake game and saw this maniacal pass rusher smash into Temple quarterback Chad President on fourth-and-3.

Strong knew how to recognize talent, to be sure.

For Hager, when that phone call from Strong, the opportunity to wear burnt orange and the feeling it generated was too much to pass up. “If you’re a kid from Westlake playing ball and you’ve got your father’s legacy here and you’ve got three older brothers that didn’t come here,” Hager said, “it’s the only thing you think about in terms of where do you want to go to school.”

Britt Hager said Breckyn did it right. His son called then-Baylor coach Art Briles and simply explained to him that Texas was a childhood dream.

“It’s hard to get a scholarship,” Britt Hager said. “When I talk to parents and they’re going through this process, I tell them, ‘Look, anytime someone wants to offer you a scholarship, it’s hard to do and it’s an honor. Someone believes in you.’”

Strong and his defensive staff used Hager mostly in third-down pass-rushing situations. They embraced his wild-man persona and spirit. But when new coach Tom Herman and defensive coordinator Todd Orlando came to Austin before the 2017 season, they simply didn’t know what to make of this guy.

After all, here’s an athlete who referenced Marlon Brando, method acting, philosophy, love and “I wanted to figure out how I could prove God’s existence,” he said. “I’m working on a thesis. It’s 75 pages, but I’m trying to condense it to one page.”

Herman wasn’t a fan of the Breckyn Hager experience. At least not initially.

“We’ve all been around fake hype guys,” Herman said. “We’ve all been around the show guy, like Spicoli (Sean Penn’s character from “Fast Times at Ridgemont High”) where you’re not sure if it’s real or not real. Is that really him? Does he really go to bed at night like that? He does. It’s real. That’s not an act. That’s not for show. That’s the way his circuits are wired.”

Suffice to say, they didn’t hit it off. They two men sort of “stayed out of each other’s way” initially, Herman said. Hager didn’t understand why he was initially moved to linebacker. Finally, things came to a boil at the weirdest time imaginable — during the third quarter against Oklahoma State.

Hager registered a sack and came off the field. Herman went to give his player a low five. “It’s the craziest thing,” Herman said. “And he stopped in his tracks, takes his helmet off and says, ‘Coach, I’m sorry!’

“I said, ‘For what?’ I’m looking out on the field. Is there a flag. Did he face-mask somebody? Breckyn, what?,” the coach continued.

Said Breckyn: “That was genuinely the beginning phases of repenting almost for how (expletive) up I was. Excuse my language. But you know what I mean?”

Hager is now one of Herman’s most passionate supporters. He had four tackles, one tackle for loss and a fumble recovery in the Texas Bowl victory while wearing jersey No. 60 in honor of the late Tommy Nobis. His father also wore No. 60.

“Three years and two coaching changes has been fast and furious, but going into this last year, it’s a great hope,” Britt Hager said. “I do believe we’ve got the kids on campus now that can play at high level. I do believe we have a great coaching staff in place. I do believe in kids have bought in. Hope is high for his senior year and his team.”

Oh, and about that hair. Breckyn says he still won’t get a haircut until Texas wins the Big 12 title. He still plans on having his teammates and friends cut off his locks on the stage at AT&T Stadium while holding the trophy.

At that point, he’ll be a winner, all right.

“Everything stems back to love, my man,” Hager said. “When people start being fake and people just don’t get the mission, when they don’t respect greatness such as coach Herman and coach Orlando … it’s trial-and-error. I can’t say anything more.

“Any other question that’s going to stem into the future, I just can’t answer anymore,” he said. “It’s all I think about.”

Triplets of the Big 12: Gary Patterson doesn’t want to give away QB details, but Horned Frogs skill players are no secret