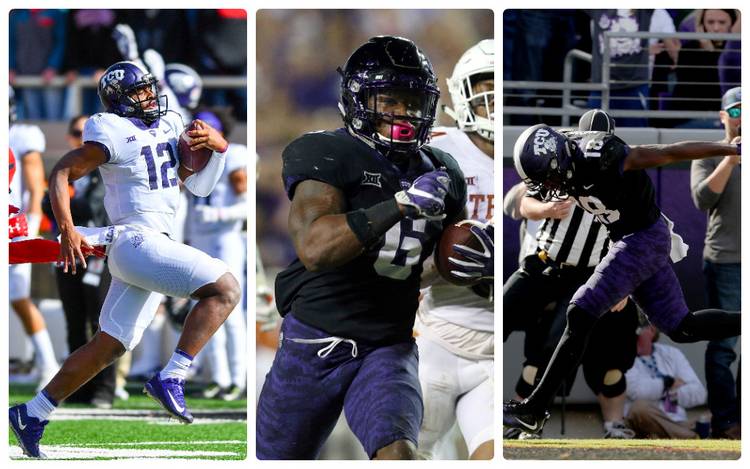 TCU coach Gary Patterson never, ever wants to reveal a detail, no matter how minor, that his opponent could use against him.

He brought sophomore quarterback Shawn Robinson with him to Big 12 media days last month. It  made sense for folks to assume that Robinson was atop the depth chart. He is the only quarterback on the team with a start.

Yet late last week, Patterson talked as if there still was an ongoing competition between Robinson, a coveted four-star prospect when he signed in 2017, and Michael Collins, the former walk-on who started his career at Penn two years ago.

Patterson was even reticent to discuss the attributes of the quarterbacks he’s considering, in case an opposing coach would be reading the interview transcript.

“I don’t know without telling Texas and everybody else what they do,” Patterson told reporters “It’s hard to answer that question. But they’re both pretty athletic guys. Shawn’s very athletic. He’s lost a lot of weight since spring.”

The coach also said there was no separation, competition wise,  between the two, saying  “actually I think both Shawn and Mike look good. Shawn really gets himself out of trouble, though.”

Robinson is known as a dual-threat quarterback, fitting the skill set the TCU offense likes to emphasize. As a true freshman last fall, he started one game, winning at Texas Tech as top guy Kenny Hill rested because of an injury.

Collins played four games at Penn in 2016, then redshirted last year. The native of Connecticut said he considered Nebraska, Iowa and Pittsburgh before choosing TCU because he liked its business school.

Since the TCU offensive line is a work in progress — four from last year’s group are in NFL training camps — eluding a rush will be a plus for the quarterback. And for that factor, Robinson probably will be the starter when the Horned Frogs open against Southern on Sept. 1.

Patterson may want to remain coy about what his quarterbacks can do, but there’s no hiding the skill level among the running backs and receivers.

Sophomore Jalen Reagor could be the most dynamic wideout in the league if the last game he played is any indication. His 93-yard touchdown reception helped TCU beat Stanford in the Alamo Bowl. The catch, the longest touchdown in that bowl’s history, was one of eight  Reagor scored last year. He had the most scoring catches of any freshman in the country.

His 169 receiving yards against the Cardinal also set a TCU bowl record.

Turpin has a unique detail on his résumé. He was the only player in the country last year to score five different ways; he scored via passing, receiving and rushing and he returned a punt and a kickoff for touchdowns.

Running back also is a strength.

Darius Anderson started only three games last year, but still led the Frogs in rushing with 768 yards. His big game came in a road upset of then-No. 6 Oklahoma State when he rushed for 160 yards and three touchdowns. He also caught four passes against the Cowboys, The performance garnered him national player of the week honors.

Anderson was on track to eclipse 1,000 yards, but missed the last four games because of an injury he suffered in mid-November against Oklahoma.

He may be the most athletic player on the roster. Anderson can bench press 440 pounds. His vertical jump has been measured at 42 inches and his best time in the 40-yard dash is 4.39 seconds. All would be elite numbers nationally if he could post them at the NFL combine.

“I’m just even that much hungrier, just ready to get back on the field and compete with my team,” Anderson told reporters. “I think I can grow a lot. I still feel like I have a lot of work to do and learning in different areas. I’m still learning as the process goes on.”

‘I ain’t done nothing yet’: Burnt orange-bleeding Breckyn Hager desperate to leave Texas a winner