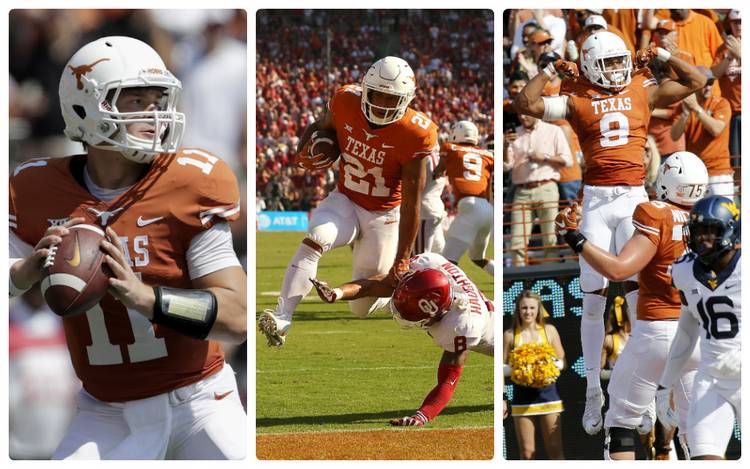 The Texas offense posted such benign offensive stats a year ago in Tom Herman’s first season.

The Longhorns were only seventh best among the Big 12’s 10 teams in total offense. UT, along with Iowa State, Kansas and Kansas State, were the only offenses that failed to average at least 400 yards a game.

Is there a fix for 2018? Maybe age can be a refreshing football elixir. Quarterback Sam Ehlinger said he was 100 percent certain the Longhorns would be better on his side of the ball.

“Experience. Year two,” Ehlinger said.  “We’re into trying to figure out what we’re doing on every play. We know what we’re doing. Now it’s fine-tuning the parts of the offense to excel even more.”

Herman recently pointed out how young his offense was a season ago and that a year of maturation would improve the on-field product. When he mentioned how raw the offense was, he was asked specifically last month whether offensive coordinator Tim Beck would maintain play-calling duties.

“Again, there were multiple games where we started five true freshmen, a true sophomore, and there is an element to that that you’re probably not going to light the world on fire on offense,” Herman said.

“The best thing about true freshmen is they become sophomores and they develop and they learn how to finish.”

Every team in the Big 12, save for West Virginia, has distinct offensive issues. The only coaches who are fairly certain — at least publicly — about who they’ll start at quarterback work for WVU, Iowa State and Baylor.

Herman still must choose between Ehlinger, a sophomore, or Shane Buechele, a junior, as his starter. Each played in nine games last season. Buechele started seven, Ehlinger six. The competition still isn’t settled through mid-August. There are no tea leaves to read. Both quarterbacks were available to speak to the media this week.

For now, let’s give Ehlinger the edge based on the fact that he generated enough offense to lead the Longhorns to a win over Missouri last December in the Texas Bowl.

He also led the team in both passing and rushing in 2017. The last quarterback to do so was Colt McCoy in 2008, although the Longhorns were a much better offense when McCoy was running the show.

No matter who starts at quarterback, the Longhorns must have a running back step up and be consistently productive.

Junior Kyle Porter is the most experienced. Yet in his previous two seasons, he’s yet to register a 100-yard game. Sophomore Daniel Young had the best stats of any running back in 2017 with 373 yards. Fellow sophomore Toneil Carter rushed for 252.

Maybe a newcomer steps up. Tre Watson, a transfer from Cal, was cleared for contact this week. Freshman Keontay Ingram was a four-star recruit.

“I’m not ready to crown them yet,” Herman said. “But it’s obvious that we’ve developed at that position.”

The receiving group, led by junior Collin Johnson, is talented. Yet none has shown Saturday-to-Saturday consistency.

The 6-6 Johnson worked on winning one-on-one matchups this spring. And Lil’Jordan Humphrey, who is 6-4, 225 pounds, will continued to be used as an all-purpose player. It’s why Herman refers to him as a “Swiss Army Knife.”