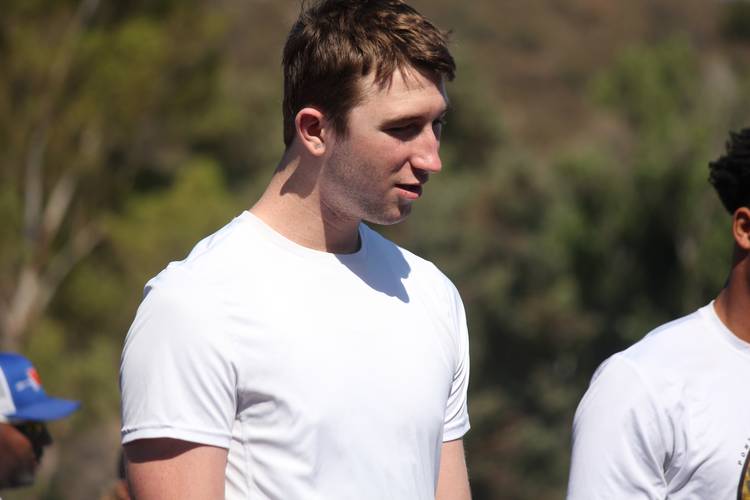 Westlake Village (Calif.) tight end Seth Figgins is one of two 2020 prospects at his position to hold an offer from Texas. (Mike Craven)

LOS ANGELES — Only two 2020 tight ends in the country own an offer from Texas. One is four-star Michael Meyer, who is committed to Notre Dame. The other is Seth Figgins, a three-star from Westlake Village in California, the same school that has produced four-star 2019 commitment De’Gabriel Floyd.

Figgins is a 6-7, 225-pound tight end who’s currently recovering from shoulder surgery. He expects to be back in action come October.

“Seth is physical for a young guy. His size is something you can’t teach,” said Westlake Village head coach Tim Kirksey. “He’s athletic, he runs well and has good hands. He’s also played some defensive end. He’s going to be a big-time recruit.”

Figgins visited Texas for its Stars at Night camp, leaving Austin with an offer. His five offers are from Texas, Oregon, Arizona State, USC and Utah. That list will grow longer once he’s healthy and able to provide programs with tape from his junior season. Figgins is a true three-down tight end, excelling as a blocker and a pass-catcher.

“He’s got the ability to flex. He can put his hand in the dirt and block. You can play games with his size by moving him around and getting mismatches,” Kirksey said. “He’s also a great blocker.”

Figgins said his visit to Texas allowed him to meet the coaching staff and become more familiar with the program, the new direction under Tom Herman and the way the Longhorns want to use the tight end under offensive coordinator Tim Beck. Texas has signed three tight ends in Herman’s first two classes and holds commitments from a pair of 2019 prospects.

“I know Texas is a great program,” Figgins said. “The way that offense uses the tight end is exactly how I want to be used in college. Texas moves the tight end around to get mismatches. I’m a tight end who would choose a pancake block over a reception, unless it’s a touchdown. My job is to help the team, so I don’t care if I’m blocking or running routes.”

Texas’ chances are greatly improved because of Floyd. Figgins said the young guys in the area look up to the future Longhorn, and that the four-star outside linebacker is already letting his younger teammate know what the future would hold for the pair in Austin if Figgins decides to join the California-to-Texas movement.

“De’Gabriel is very wise. I pick his brain whenever I can,” Figgins saide. “He’s gone through what I’m starting to go through and he’s a great person to talk to and bounce stuff off about football and recruiting.”

The prep season in Texas doesn’t begin until the last Thursday of August. That’s not the case across the entire country. Four of Texas’ 15 commitments in the 2019 class kickoff their senior season on Friday. The two commits from California and Arizona will be in action Friday night, as each team kicks off its 2018 season. Marcus Tillman Jr. (Fla.) and Kenyatta Watson II (Ga.) begin their season next week.

Here’s where and when the four commitments are in action this week:

Triplets of the Big 12: Kliff Kingsbury, Texas Tech face a quandary at quarterback