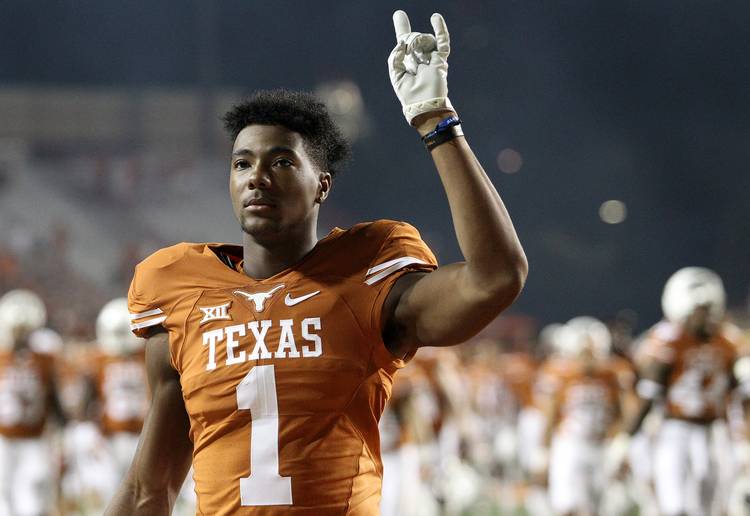 Training camp gets monotonous here in the middle of August. As Texas coach Tom Herman said, the excitement of football season has worn off, but the season opener is still weeks away.

“This is when the pros show up and the guys that aren’t pros get exposed,” Herman said after Thursday’s practice.

At this point, Herman may need some professional bubble wrap. Receiver John Burt is battling a foot injury, and safety Caden Sterns has a bruised shoulder.

News of their injuries came one day after it was announced that freshmen Ayodele Adeoye and DeMarvion Overshown were both ruled out for the Maryland game with knee injuries. Adeoye was already in the mix at linebacker, and Overshown was a defensive back who moved to linebacker to help provide depth.

On the positive side, starting cornerback Davante Davis (hamstring) is projected to return to practice next week. And UT coaches have their fingers crossed that linebacker Jeffrey McCulloch (strained pectoral) will return to action before the opener.

All of these injuries come at a time when player safety is national news. Maryland administrators are facing a firestorm over the June 13 death of Jordan McNair. The university president announced the school had fired the Terps’ strength and conditioning coach. Head coach D.J. Durkin remains on administrative leave.

The University of Maryland Board of Regents is scheduled to have a meeting Friday to discuss Durkin’s future.

“Any time you lose a student-athlete, it’s a tragedy,” Herman said. “Our hearts and thoughts and prayers are with him and his family and the whole University of Maryland community. But I have a lot of confidence in … our training staff, our strength staff and our coaches. The way they operate is as good as there is in the country. We take every precaution that there is.”

To that end, UT players are now enjoying another benefit at Frank Denius Fields. A refrigerated shipping container — something an 18-wheeler would haul — is now available for the Longhorns. On Thursday, players walked out of the indoor practice facility and straight into the cooling box and literally chilled.

UT equipment staffers had been working several days to get the container operational, before the Maryland news broke.

Malik Jefferson left school early to go pro, and Edwin Freeman transferred. Adeoye and Overshown’s injuries complicates things, and senior Anthony Wheeler must sit out the first half against Maryland for a targeting ejection last season.

Asked about his level of concern, Herman said, “High. … But we’re pretty well versed in our dime package, so if we had to live in that for a week we could.”

QB battle back and forth: Herman praised quarterbacks Sam Ehlinger and Shane Buechele on Thursday and indicated neither player can pull away from the other.

“We need for one guy to be ahead for more than one day,” Herman said. “Both have had really, really good moments. They both had some that you shake your head at. But overall, it’s a really good thing. Both of them have used each other to where they’re playing at a level that I hadn’t seen either of them play. Now, one of those guys has to put that together back-to-back-back.”

The Longhorns are scheduled to have their second scrimmage on Saturday. It will be closed to the public and media.

O-line coming together: The Longhorns’ offensive line is starting to come together, if you can parse Herman’s words correctly. The coach was asked about redshirt freshman Samuel Cosmi, but Herman gave insight about the unity’s overall depth.

“I think we’re probably nine guys right now, and you probably have six that you wouldn’t hold your breath when they’re in the game,” Herman said. “The other three could get you through a game, but you’d probably have to protect them a little bit. The rest of the crew is probably developmental at this point. But Sam would be one of those nine.”

Grad transfer Calvin Anderson is developing. According to the UT football Instagram account, Anderson and freshman running back Keaontay Ingram both had the black stripes removed from their helmets — a sure sign of proving themselves.

Fan autograph session: UT’s No. 1 fan, Matthew McConaughey, took in practice on Thursday. This came one day after he was called out by cornerback Kris Boyd on the debut episode of “Texas Football All Access” on Longhorn Network.

Fans can get all the Longhorns’ autographs from 12:30-2:30 p.m. Sunday at Royal-Memorial Stadium. Team posters will be provided. Admission is free.

The Dotted Line: Texas’ obsession with football made Chris Adimora love the Longhorns