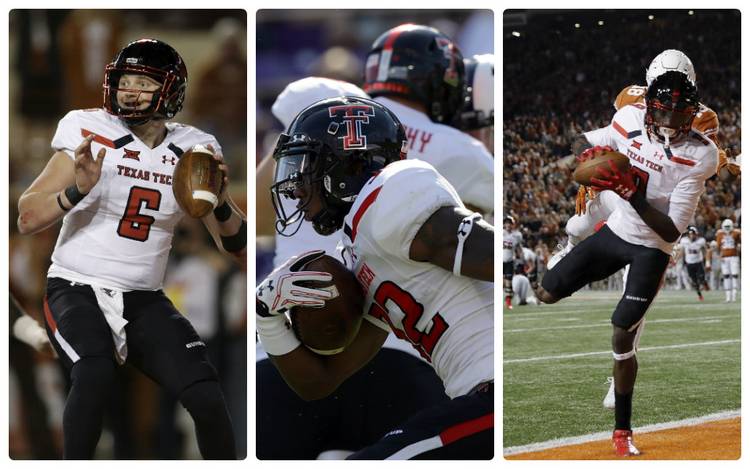 It’s been five years since Texas Tech has had so many questions at quarterback. Back in 2013,  Kliff Kingsbury was in his first season as head coach in Lubbock and needed to rely on freshmen to take over the quarterback spot.

You might remember what happened that year. Kingsbury turned to walk-on Baker Mayfield (the eventual Heisman winner when he transferred to Oklahoma) and then Davis Webb (who became a third-round draft pick after he left for California). The experience was raw, the talent was there.

Kingsbury is looking again this season. Does he have that sort of untapped talent with McLane Carter, Jett Duffey or Alan Bowman?

All three are still in contention as Tech preps for its season opener against Ole Miss.

“We have three weeks … to figure out who the guy is,” Kingsbury told reporters this week. “They’re doing some good things, still making some mistakes we can’t make, and I think they understand they’ve got to take care of the football first and foremost and that’s an area we’ve got to improve in. But they’re studying hard, working hard, have improved dramatically from the spring, and I think we’re on track for having a guy that can step up and play well.”

Carter, with one career start, is the most experienced of the three. He first played at Tyler Junior College before transferring to Tech. He played in four games last fall and started the regular season finale against Texas. Kingsbury benched him in the second half against the Longhorns.

Bowman, a true freshman who enrolled in the spring, threw for 11,393 yards and 119 touchdowns during his four-year career at Grapevine High School. He was running second team this week.

Sophomore Duffey, a one-time four-star prospect, has played in only one game in his career and that was last year’s season opener.

Tech conducted its first scrimmage of preseason camp last Saturday. No official stats were released to the media. But a quick highlight video posted on the Tech web site revealed that Carter and Bowman each threw touchdown passes, while Duffey was tagged with a pair of interceptions.

Kingsbury said last month he’d like to quickly settle on a starter, somewhat nixing the idea of having the offense rotate anyone at the position.

“That’s how I’ve done it,” Kingsbury said. “But whatever is best for the team and the offense we’ll do. I would like to push the reps and the focus to one guy and develop him to the highest extent, making sure the other guys are getting good work, too. But we’ve had success in our program of really pushing it to one guy and making him the focus.

If Tech can figure out its quarterback quandary and find another reliable receiver or two, it could be a team to reckon with in the Big 12.

Tailback should be a strength.

Da’Leon Ward impressed as a true freshman in 2016, leading the team in rushing with 423 yards. He redshirted last season.

Tre King was a surprise success from last season. He was a late add to the 2017 roster, transferring from Hutchinson Community College last summer. He traveled 22 hours by bus to get to Lubbock. He played in 13 games, with his 623 yards rushing second-best on the team. He also caught 17 passes.

T.J. Vasher, a sophomore, should be the top receiving threat. At 6-6, he’s easy to find for any of the quarterbacks to find. He had 29 receptions for 545 yards and six touchdowns in 2017. He caught fire late with 100-yard games against West Virginia and Texas.